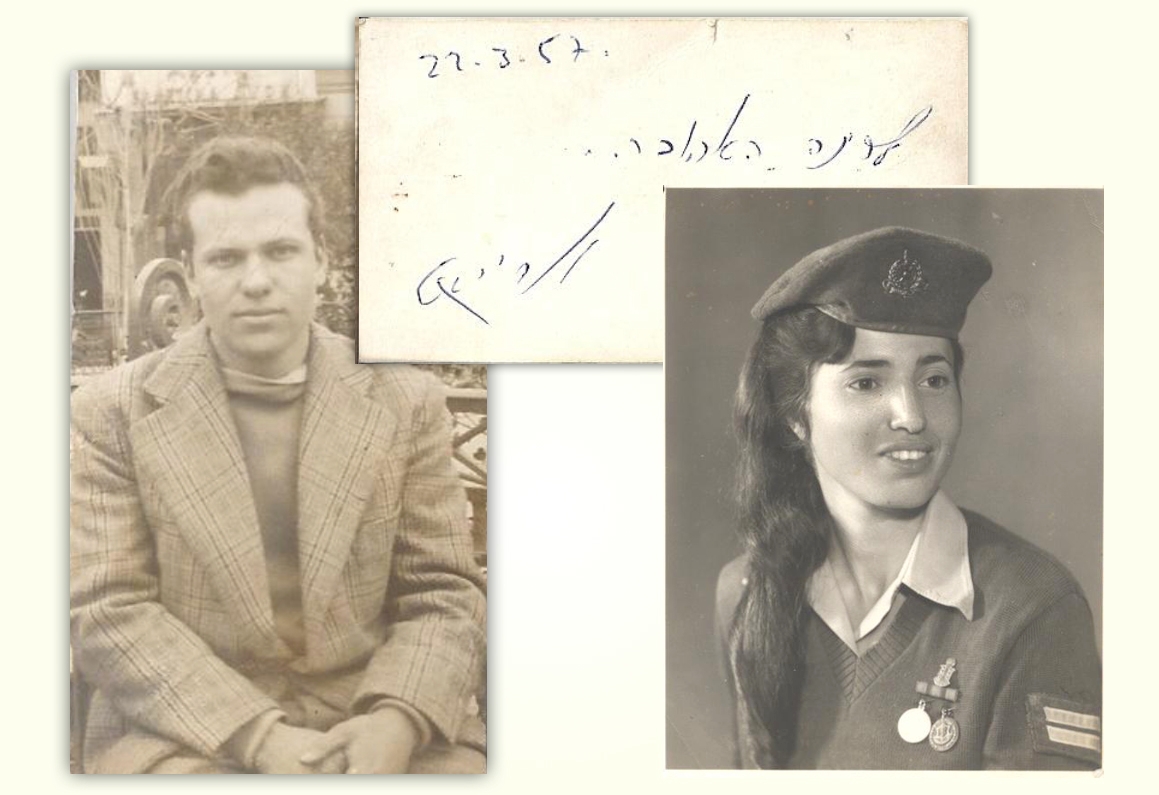 The couple took walks on the school grounds. Aryeh sometimes rode his bicycle to visit Rina, whose maiden name was Arazi, at her parents’ home in Tel Aviv. He would summarize the plot of “War and Peace” as she embroidered. Elchai remembers the first ice pop that Sevilla bought her. The silver necklace he presented is worn today by her niece, Esther Arazi.

Elchai, now a 74-year-old mother of three and grandmother of 12, recently wondered where Aryeh is and how he is faring. Arazi offered to help look for him.

“I’d like to speak with him, reconnect and hear what life has been like for him,” Elchai said. “We went out for three years. I’d like to close a circle.”

On Wednesday, “Seeking Kin” found Sevilla. The retired art dealer and appraiser was reached at the apartment in Athens, Greece, overlooking the Mediterranean Sea where he and his wife of 37 years, Stella, now live.

Sevilla, 77, said he would be happy to hear from his old girlfriend. “It could be interesting. It could be fun,” he said of the chance to reconnect.

In Athens, Sevilla has returned to his roots. He was born in his mother’s homeland, Austria, and lived from ages 2 to 10 in his father’s native Greece. The family moved to Israel in 1945.

Elchai and her husband, Moshe, are farmers who have lived their entire married lives, 54 years, on Moshav Beit Halevi, in the Hefer Valley near Netanya. They raise flowers for export to the Netherlands. For years they had a barn and planted orchards of oranges, clementines and grapefruit.

“I love the life of the moshav: the people, the quiet and the solitude,” Elchai said. “I can’t stand the city.”

Her preference for the outdoors first drew Elchai to Kiryat Yearim and Ben-Shemen. She had enjoyed living as a girl on Kibbutz Kfar Hamaccabi, near Haifa, after the family reached Israel from Beirut, Lebanon.

Sevilla, following his graduation from Ben-Shemen, served in the Israeli Navy, then attended Jerusalem’s Bezalel Academy of Arts and Design. In 1956 he left Israel to continue his studies in Austria and Germany, graduating from Munich’s Academy of Fine Arts. For 45 years he lived on Manhattan’s Upper East Side, where he had a studio. He and Stella, who do not have children, later retired to Clearwater, Fla., and continue to spend part of each year there.

Elchai retains much of Sevilla’s correspondence, which her niece described as stylized and poetic — “letters that people don’t write anymore,” Arazi said. In one letter, he asked Elchai to join him abroad, but her father refused to let her go. Elchai last heard from Sevilla in a postcard sent in 1962 from Minneapolis, where his parents, brother and sister had resettled. Sevilla designed the postcard himself. In it, he extended Rosh Hashanah greetings.

In a bid to find Sevilla, Arazi spoke with residents of Moshav Neveh Yemin, near Kfar Sava. The Sevilla family had lived on the moshav when the couple knew one another. Arazi also was interviewed on Israel’s “Hamador L’chipus Krovim” (Searching for Relatives Bureau) radio program. One listener provided phone numbers and email addresses for Sevilla that he had found online, but the information was outdated. “Seeking Kin” ultimately found Sevilla through a Connecticut art dealer who knows Sevilla and forwarded a message to him.

Elchai also has a creative side. She knits and embroiders, and paints on silk, fabrics and walls. Arazi remembers that her aunt designed colorful Purim costumes for the latter’s children — a Moses outfit stands out. The Elchais’ home is decorated with Rina’s paintings of landscapes, animals, flowers and children – “and she does it all from her head, without looking at a photograph first,” her niece said. “It comes from within her soul.”

Searching for Sevilla was a labor of love for Arazi – the least she said she could do for the woman who took her in at age 3 after the young child’s mother died in a car accident abroad.

“My whole life, she raised me,” Arazi said. “I always try to do things for her.”

If you would like “Seeking Kin” to write about your search for long-lost relatives and friends, please send a brief email to Hillel Kuttler at seekingkin@jta.org. “Seeking Kin” is sponsored by Bryna Shuchat and Joshua Landes and family in loving memory of their mother and grandmother, Miriam Shuchat, a lifelong uniter of the Jewish people.