Israel’s haredi soldiers take their spirit into the field 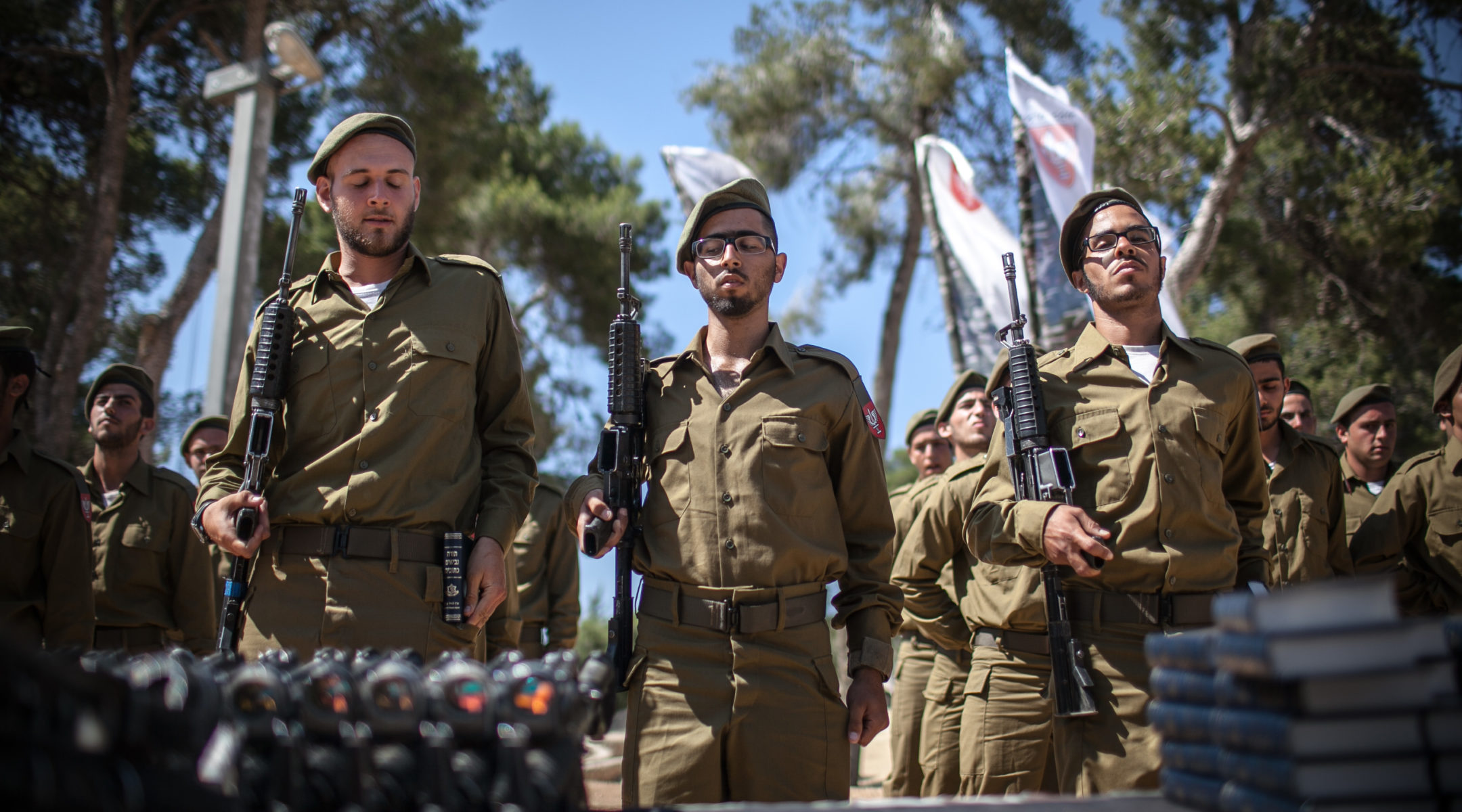 TEL AVIV (JTA) – Like any of the Israeli army’s combat battalions, the soldiers of Netzach Yehuda faced a 60-mile hike during basic training meant to simulate battle conditions.

They hiked with their gear at night and during the day, up and down hills and through rough terrain. One night, their commanders told them that their supply trucks had been bombed and they needed to ration whatever food and water they had left.

Finishing the hike, they put down their gear and caught their breath. As a band played traditional Jewish wedding tunes, they began to dance as if one of the soldiers had just been married.

Popularly known as the Nahal Haredi, Netzach Yehuda is the haredi Orthodox division of the Israeli army, and its combat and reserve forces number several thousands of men.

For decades, haredi men in Israel have received exemptions from otherwise mandatory service in the Israel Defense Forces, so that they could study in yeshivas. Many are non-Zionist or anti-Zionist, and mass protests erupted in haredi neighborhoods this summer when the government came close to passing a law requiring haredi men to serve.

Even if a law were to be passed, some supporters of mandatory haredi service question the army’s ability to accommodate thousands of new draftees who require stringent kosher certification and eschew any contact, especially physical, with women.

Netzach Yehuda has attempted to address those issues on a smaller scale. And though they say that the IDF sometimes falls short in its efforts to accommodate the battalion, its soldiers and administrators feel that since its founding in 1999, the program has worked.

“It’s a little more of a Torah atmosphere,” said Yehuda, 20, who is serving now in Netzach Yehuda. “There are fewer problems with prayer and army regulations.”

After they finish training, Netzach Yehuda soldiers serve in and around the West Bank Palestinian city of Jenin, fulfilling the same duties as other combat units. But when they’re not on combat missions, the soldiers’ schedule includes time for three daily minyans, including at least 45 minutes for the morning service. A synagogue always stands close to their barracks, giving the soldiers space to pray or learn a page of Talmud during breaks. Rabbis occasionally come to their bases to teach Torah.

In addition, the battalion’s food is mehadrin kosher, an especially stringent certification. And the soldiers receive ritual fringes on a green rather than white undergarment, so that it will match their combat uniforms.

Netzach Yehuda’s soldiers also have little if any direct contact with women, which accords with the strict gender separation in haredi communities. While women often teach fitness classes in the IDF, men run those classes for the haredi soldiers.

“They come back and they’re even stronger from a religious viewpoint than when they came in,” said Rabbi Tzvi Kledanow, head of the Netzach Yehuda nonprofit, which runs the battalion jointly with the army and Defense Ministry. “The environment is a very positive environment. It has everything it requires to avail itself to a haredi young man.”

But Kledanow was quick to note that although the army accommodates the haredi soldiers, the soldiers don’t necessarily enter Netzach Yehuda supporting the army.

“They’re not Zionist at all,” Kledanow said. “Not only are they not Zionist, but their education is anti-Zionist.”

He says the soldiers enlist because “not every haredi boy is cut out to sit and learn 12 to 14 hours in yeshiva every day. They feel they need a different life, and in order to work you have to do the army.”

That pragmatic line of thinking stands in contrast to the official position of Israel’s haredi leaders and much of their rank and file, which remains opposed to the idea of haredi army service even as the government tries to mandate it. A large portion of haredim are opposed to or agnostic toward Zionism.

“Everyone out there is a sinner,” said Yehuda Cohen, 20, a haredi student at Yeshivat Porat Yosef in Jerusalem’s Old City. “The Land of Israel belongs to Jews if they keep the Torah. If there’s no Torah we don’t deserve the land.”

Such communal attitudes make returning to haredi life difficult for Netzach Yehuda soldiers. Because “to marry a boy that was in the army is a no-no,” Kledanow says, Netzach Yehuda helps the battalion’s veterans to find matches for marriage and then helps them fund their weddings, if necessary.

Serving in a combat unit also poses challenges to men raised in strictly observant communities, as they must perform missions and guard duty on Shabbat and Jewish holidays. But the battalion consults a rabbi who tries to minimize those occurrences, while Netzach Yehuda soldiers do what they can to perform rituals regardless of where they are.

“On seder night there will be 100 soldiers, so 30 soldiers will be on guard duty,” said Eli Lax, who runs the nonprofit Coalition for the Torah-Observant Soldier. “But if they finish guarding at 10 or 11, they’ll start praying at 10 or 11 and have the seder at 12.”

Moshe Lifshits, a veteran of the battalion who now works with Pledanow, and who participated in the 60-mile hike and subsequent dance, loved Netzach Yehuda’s Jewish atmosphere.

“The spirit of the guys is very strong,” he said. “Shabbat there, you feel like a yeshiva.” He said that even as 20 or 30 percent of the battalion is Modern Orthodox rather than haredi, “You see everyone together.”

While most men are required to serve in the IDF for three years, after two years of service in Netzach Yehuda, its soldiers have the option of taking a year of classes, either to prepare them for university or to teach them a profession.

“A boy coming into the army from the haredi community has a sixth-grade skill level,” Kledanow said. “It’s not enough to do army service. They want to enter into the workforce, so they need some educational skills.”

According to the IDF, more than 85 percent of Netzach Yehuda veterans find jobs after their service.

The past draft cycle, according to Kledanow, was Netzach Yehuda’s most successful in history, with 200 recruits. As the debate over haredi army service continues, Yehuda, the current Netzach Yehuda soldier, says that more haredim should join the IDF.

“Everyone needs to give,” said Yehuda, who said he was raised with a positive view toward army service. “We’re one nation in one place and everyone should contribute.”