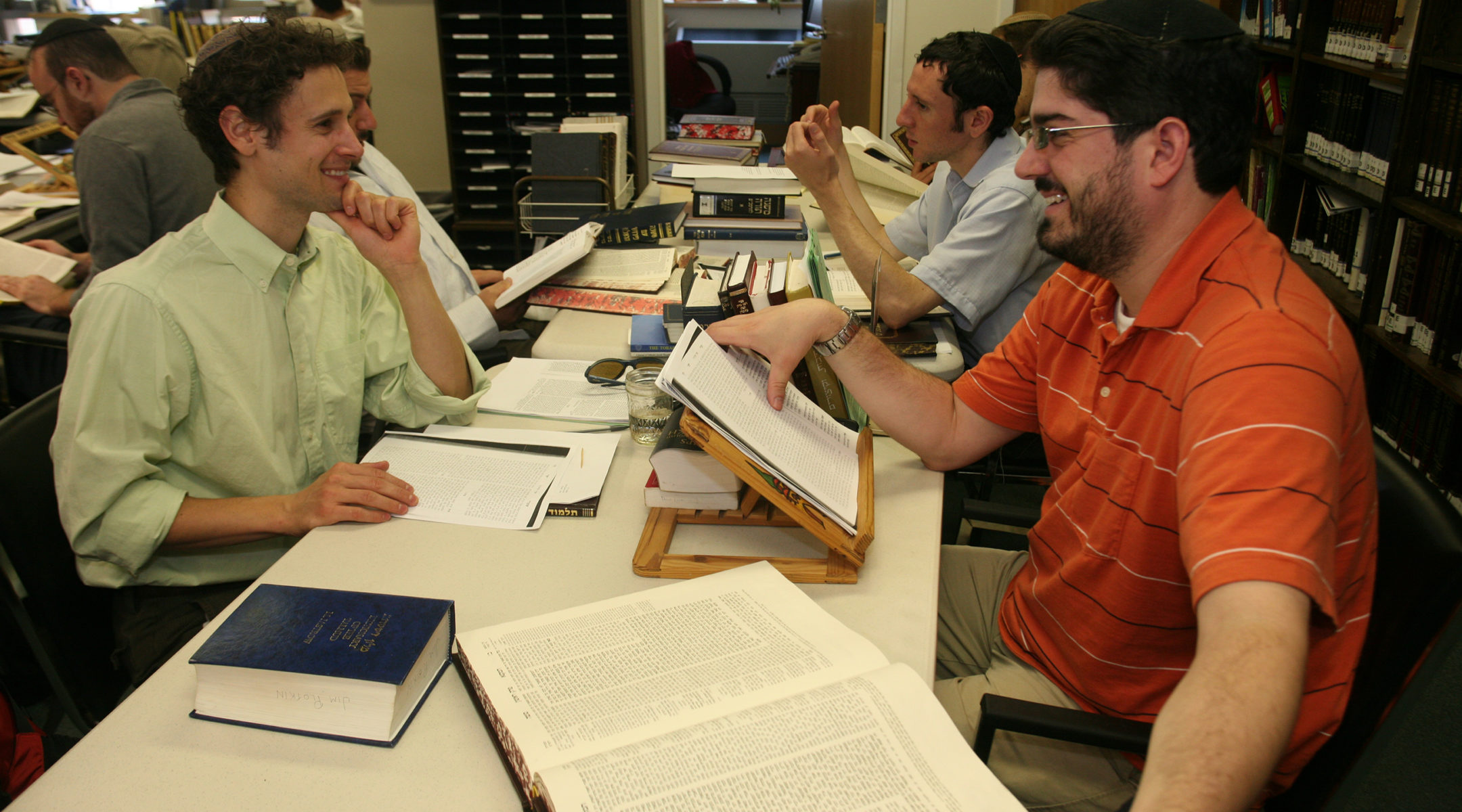 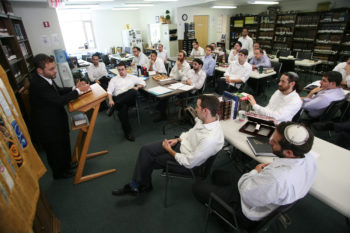 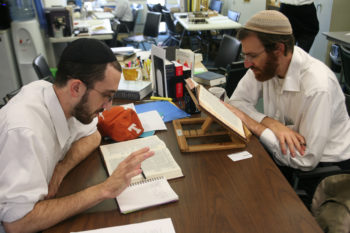 NEW YORK (JTA) – When Rabbi Asher Lopatin takes over the helm of Yeshivat Chovevei Torah next summer, he may try to pull off something of a football move at the Modern Orthodox rabbinical school: Look left while going right.

In the 12 years since Rabbi Avi Weiss founded the school as a more liberal, pulpit-focused alternative to Yeshiva University’s scholarship-focused ordination program, Chovevei has produced more than 80 rabbis serving in a variety of capacities across North America. Their influence, Weiss argues, goes far beyond the Orthodox community: Chovevei’s rabbis are trained to reach out to non-Orthodox Jews while remaining firmly rooted in Orthodox practice. Weiss calls it “open Orthodoxy.”

But within the Orthodox world, Chovevei — which is also known by the acronym YCT — is still struggling for widespread acceptance.

The school is not accredited by the main Modern Orthodox rabbinical association, the Rabbinical Council of America. Not a single one of its 81 ordained rabbis serves in a synagogue affiliated with Young Israel, one of the nation’s largest Orthodox synagogue franchises, which has thwarted synagogue affiliates from hiring Chovevei rabbis. Weiss claims a warm relationship with the Orthodox Union, but an OU official was careful to note in an interview with JTA that the organization has no formal relationship with Weiss’ school.

Lopatin, 48, who for the past 18 years has been the pulpit rabbi at Chicago’s Anshe Sholom B’nai Israel synagogue, says he wants to maintain the school’s outreach-oriented approach, but one of his first priorities will be gaining broader acceptance within the Orthodox camp.

“I want to make sure Chovevei Torah is an integral part of the Orthodox world,” Lopatin told JTA. “I do think there’s a perception that Chovevei is left, for liberal Orthodoxy,” he said. “I want to start with getting the word out that we’re open to right and left.”

A large swath of the Orthodox community is either ambivalent about Weiss’ yeshiva or outright hostile to it. A 2007 article in Yated Ne’eman, a haredi Orthodox paper, that was reprinted on the Yeshiva World News website and headlined “Yeshivat Chovevei Torah: Is it Orthodox?”, called the rabbinical school a “threat to halachic Judaism” – rhetoric usually reserved for the non-Orthodox world.

Much of the antagonism toward Chovevei has to do with Weiss, 68. The president of Chovevei since its founding in 2000, Weiss set off a firestorm in Orthodox circles two years ago by ordaining a woman rabbi, Sara Hurwitz, upon whom he conferred the title “rabba” (a female version of “rabbi”). Long before then, Weiss had been known for pushing the Orthodox envelope on women’s issues.

Although Hurwitz technically was ordained outside of Chovevei, which admits only male students, the rabbinical school remains inextricably connected with Weiss’ decision. Chovevei’s relocation several years ago to the same building that houses Weiss’ pulpit synagogue, the Hebrew Institute of Riverdale, where Hurwitz works as an assistant clergywoman, only reinforced that notion.

“YCT presents itself as being an institution on the cutting edge of the liberal end of the Orthodox community,” said Rabbi Shmuel Goldin, president of the RCA and pulpit rabbi at Congregation Ahavath Torah in Englewood, N.J. “If YCT were to admit women, that would be a red line.”

Chovevei’s transition moment away from Weiss — who will hand over the presidency to Lopatin next summer but stay on as a teacher at the school — provides an opportunity to change the institution’s reputation in the Orthodox world, Chovevei’s backers say.

Lopatin can “expand the influence Rabbi Weiss had maybe without the political controversy,” said Steven Lieberman, chairman of Chovevei’s board and an attorney in Washington with the firm Rothwell, Figg.

“There are people on the rightward side of Orthodox Judaism who, whenever the name Rabbi Avi Weiss comes up, they don’t think about the enormous scholarship he’s done, the community building, the Soviet Jewry activism. Their immediate reaction is: This is the man who gave Sara Hurwitz the title of rabba,” Lieberman said. “For that reason, I think there are some people who don’t look any further at YCT. Having Rav Asher Lopatin, maybe those individuals will now be able to join us in building the bridges that we’ve been trying for years to build.”

But while a YU spokesman estimated that 80 percent of RIETS’ recent graduates work in the rabbinic field, Chovevei says its figure is 95 percent. That includes not just pulpit rabbis but school administrators, campus rabbis, hospital chaplains and even camp rabbis. This year’s incoming class at Chovevei numbers 13. Weiss’ original impetus for creating the school was to produce more rabbis committed to filling synagogue pulpits, but over time, he says, he came to realize that other clergy positions were just as legitimate. More than 30 of Chovevei’s graduates work in Orthodox synagogues.

Chovevei administrators — including Weiss and Rabbi Dov Linzer, the school’s dean and rosh yeshiva — cite Chovevei’s emphasis on pastoral matters as one of its main distinguishing factors.

“Chovevei has a unique approach to rabbinic education in that we’re not only training scholars in Torah, but there’s also a great emphasis on practical rabbinics,” Weiss said. “Certainly, rabbis have to be knowledgeable, but if you ask me what the rabbinate is about, I tell the chevre the rabbinate is about simply being there for people,” he said, using the Hebrew word for “guys.”

That means everything from courses in pastoral psychology to courses on Jewish leadership.

Without abandoning that approach, Lopatin says he wants to ground the students more firmly in Orthodoxy by exposing them to the “full Orthodox spectrum.” That includes, he said, exposure to and instruction from haredi Orthodox yeshiva leaders.

“When it comes to things like Gemarah and halachah and hashkafah and Tanach,” Lopatin said, using the Hebrew terms for Talmud, Jewish law, philosophy and Bible, “those are things that need to be taught fully, classically Orthodox. Those are the main meat and potatoes of smicha” – rabbinic ordination.

Unlike at some other Orthodox institutions, however, Lopatin said he is open to non-Orthodox and even non-Jewish instructors giving the rabbinical students pastoral training, such as how to give sermons, or how to manage a nonprofit organization. He also wants Chovevei to be “open from the sense that any question can be discussed and people can think openly and independently.” The pluralism comes in on the question of who the rabbis-to-be focus on reaching: all Jews, regardless of denomination.

“As much as I am a parochial Orthodox rabbi of an Orthodox synagogue, I’m very pluralistic in the sense that I want the Torah message and the Jewish message to get out beyond the walls of the Orthodox synagogue and beyond those who call themselves Orthodox,” Lopatin said.

All those involved in Lopatin’s hire — a process that has taken six to eight months — credited a $3 million grant from the Jim Joseph Foundation for paving the way; the grant was predicated in part on Chovevei’s implementing a transition plan within five years. The grant, which consists of a $500,000 grant and an additional $2.5 million in matching funds, is now in its second year.

Weiss says he’s had his eye for a long time on Lopatin — a former Rhodes Scholar, Truman Scholar and Wexner Fellow who was ordained both by RIETS and by the late Rabbi Ahron Soloveichik of Chicago’s Brisk yeshiva.

“The test of an institution is when inevitably there has to be a succession plan,” Weiss said. “With Asher coming in, thank God we’ve done magnificently well.”

(Visit JTA’s Telegraph blog to read more about Lopatin’s plans for Chovevei and the controversy over Chovevei in the Orthodox world.)