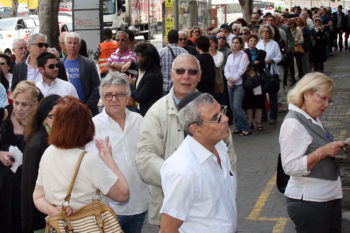 French citizens in Israel voting at the French consulate in Tel Aviv during the first round of a presidential election, April 22, 2012. (Gideon Markowicz/FLASH90)

Families lounging under parasols at cafe tables chat in French and enjoy a sunny afternoon, Nearby, the Mediterranean waves lap up against tranquil beaches.

But in the local language, Independence Square is called not La Place de L’Indépendance but Kikar Ha’atzmaut. And this scene takes place not in Nice or Cannes but in Netanya, a coastal Israeli city about halfway between Haifa and Tel Aviv.

The scene is not unique.

From Netanya to Jerusalem and all the way south to Eilat, Israel’s French community is growing and leaving its mark on Israeli society. Some 2,000 French Jews have arrived in Israel annually since 2009, with this year’s numbers apace.

French immigration first spiked above 2,000 in 2002 and reached nearly 3,000 in 2005. The French Consulate in Tel Aviv estimates that as many as 150,000 French Jews live in Israel, although only about 70,000 are officially known to the consulate. Many split their time between Israel and France.

“The kids were small and we said, ‘It’s better to come’ ” to Israel, said Avraham Doukhan, a French real estate broker who made aliyah 15 years ago. Doukhan says the younger generation of French immigrants generally is integrating well.

“The kids, they aren’t French, they’re Israeli. They know Hebrew better than French,” he said.

With 600,000 Jews, France is the world’s third largest Jewish community behind Israel and the United States. The immigration levels of the past few years mean that one of every 300 French Jews is making aliyah — more than five times the annual rate of U.S. residents moving to Israel. French Israelis say that anti-Semitism in France motivates Jews to come to Israel, as the growing French community here becomes increasingly attractive.

“They began to understand that they are less than 1 percent of the [French] population and Arabs are larger,” said Avi Zana, director of Ami, an Israeli organization that aids French immigrants. “The only option is to close ranks in the community, to express themselves less as Jews. Jews feel comfortable, safer in Israel.”

Attacks against Jews and Jewish sites have made the country’s Jewish community insecure, from the crashing of stolen cars into a synagogue in 2002 through the abduction and subsequent death of Ilan Halimi, 23, in 2006, and to the Toulouse shooting at a Jewish school in March in which four Jews were killed. The SPCJ, the French Jewish community’s protection service, documented more than 90 anti-Semitic incidents in the 10 days that followed the Toulouse shooting.

In 2004, then-Israeli Prime Minister Ariel Sharon called for French Jews to immigrate en masse to Israel, causing controversy in France. But Christophe Bigot, the French ambassador to Israel, praised France’s fight against anti-Semitism and said that positive feelings, rather than fear of attacks, should drive immigration to Israel.

“Real immigration should be driven by Zionism, religious beliefs, familial reasons, but not by fear,” Bigot said. “On the French side we’ve taken every action to ensure the security of the French Jewish community. That doesn’t mean it’s always successful, of course.”

The French Consulate has taken notice of the growing expatriate community here and provides myriad services including financial assistance, French-Israeli schools and cultural events such as film festivals or theater.

For all its growth, though, the French community in Israel has remained insular, settling in concentrated areas and establishing centers of French culture, as in Netanya’s Independence Square. Many French citizens here speak no Hebrew.

“They want to be like they are in France, to not be mixed,” said Barbara, 26, who moved here from France eight years ago. “If they stay with only the people they know, they won’t know how the state works,” she said, asking that her last name be withheld because of job concerns.

French immigrants’ behavior, however, is not unusual among immigrant populations in Israel, as Russian and American expatriate communities also have formed.

Also, French Jews do not feel completely rooted to life here, expatriates say. France is a quick flight away, and a salary in euros rather than shekels is tempting. And unlike Russian or Ethiopian immigrants, French Jews can return to a safe, democratic country.

Many French Jews thus have chosen to purchase apartments here for a potential future immigration, as well as for vacations. Coastal cities have proven popular for French buyers both because they recall the French coast and already include large French communities. The purchases, however, may have made buying a home more difficult for Israelis, according to real estate agents in Netanya.

French immigrants feel “like the city is theirs, but it’s not theirs,” said Myriam Luzon, a French resident of Netanya. “They do what they want, but there are Israelis here, too.”

A few French Jews in Netanya said they expect the majority of France’s Jews to move to Israel within the next decade. Zana said the community already here does not get enough respect from native-born Israelis.

“The Israeli people laugh at the French accent,” said Zana, who has lived here for 35 years. “They look at them as tourists. The Israeli approach is not right, not responsible.”

But Zana hopes that French Israelis, who tend to be traditionally observant and politically to the right, will become more involved in Israeli politics and society. He notes that they have already contributed much to Israel, from a solid work ethic to a democratic tradition and better taste in food.

“The boulangerie, patisserie, all of the fine food, that’s not Ethiopian or Russian influence, it’s French,” he said. “The falafel is not more Israeli than the baguette; it just got to Israel before the baguette. I don’t think in another 20 years we’ll be eating baguettes less than pita.”