Seeking Kin: A reunion that may be among the last of its kind 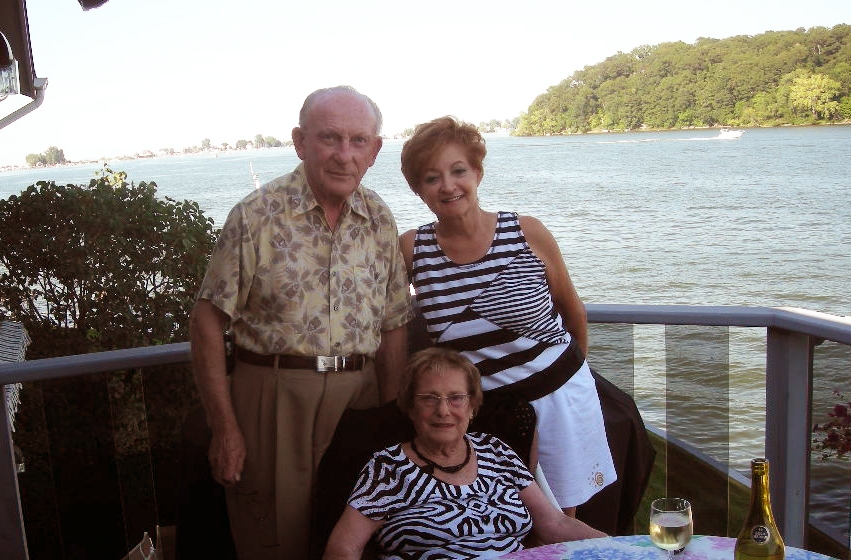 William Juksch during a dedication of a monument near the site of the Gunskirchen concentration camp in Austria, 2006. (Courtesy William Juksch)

BALTIMORE (JTA) — William Juksch, a self-described “hillbilly from the Ozarks” of southwest Missouri, was a 19-year-old private fighting for the U.S. Army near the end of World War II when he was assigned to scout observation points for a U.S. artillery bombardment of German forces.

It was May 4, 1945. Juksch’s 5th Infantry Regiment of the 71st Infantry Division had fought for a year through France and Germany. Reaching the Austrian city of Wels, Juksch and two other privates, Ohioans Frank Braughbau and Peter Carnabuci, and their captain, a college graduate named Nicholson, followed a trail through the woods. The jeep stopped at a gate, the men not knowing what stood behind it.

It was Gunskirchen Lager, a sub-camp of the Mauthausen concentration camp. With the Allies closing in, the Nazis had led thousands of Jewish prisoners from Mauthausen on a death march to Gunskirchen. Before the Americans’ arrival, the Germans had fled. Dead Jews were sprawled on the ground or stacked atop one another. Everyone else constituted the walking dead.

“Those who could walk grabbed our feet, kissed our boots, kissed our hands. They said things in German,” Juksch, an 86-year-old retired electronic scientist, said Sunday from his home in Virginia Beach, Va. “The captain radioed back what we’d found. … In no time flat there were trucks of medics and supplies. We gave them every bit of food we had with us: candy bars and K-rations.”

Still needing to complete their scouting mission, Juksch and the other men stayed less than an hour.

Juksch, who had never encountered Jews back in Missouri, didn’t speak or think much about the experience until the early 1970s, when a university student in Alabama asked to interview him for a research paper on American soldiers who had liberated concentration camp prisoners.

Now Juksch is in Alabama to attend the 71st Infantry Division’s annual reunion, which began Wednesday and runs through Sunday in Huntsville. Three Jews whom the 71st liberated at Gunskirchen are attending, too: Simon Braitman, 82, from Majowicie, Poland, who lives in Rochester, N.Y.; Aron Zoldan, 85, from Kusnice, Czechoslovakia (now Ukraine), who lives near Detroit; and Robert Fisch, 87, from Budapest, who lives in Minneapolis. The sons of two now-deceased survivors also are attending, as are several wives and relatives of survivors.

The division has held reunions since the late 1980s — Juksch attended his first around 1993 — but only in the past decade did the Holocaust survivors learn about them and ask to come, too.

“Frankly, this may be the last one,” Braitman said of the reunions. In the past year, approximately 60 ex-soldiers and their wives have died.

The poignancy of Braitman’s words is striking — and ironic.

According to Steven Vitto, a researcher at the U.S. Holocaust Memorial Museum in Washington, reunions between survivors and soldier liberators have been “happening more” in the past 20 years. “Almost every” U.S. military base here and abroad hosts a Yom Hashoah commemoration, he said, often asking the museum’s Civic Defense Initiatives department to suggest resources, including survivors as speakers.

Having been created “through difficult times,” the tie “never disappears,” Juksch said.

At the 71st’s reunion six years ago, Zoldan asked the ex-soldiers if they remembered a kid running around who didn’t know English.

Zoldan then told them of remaining behind with the Americans in Gunskirchen, assisting and speaking Yiddish with a Jewish corporal from Brooklyn, N.Y. Airplanes delivered K-rations to a German military airfield nearby, and the soldiers piled the boxes nearly a story high. Zoldan, then a teenager, climbed to the top box and removed two cans of baked beans. A guard 100 yards away ordered Zoldan to halt. The boy ignored him, figuring he’d outrun the man.

He scampered toward a field, then suddenly stopped. He identified a land mine, one of many the Nazis had compelled him to bury to repel the invaders who’d ultimately strolled unimpeded through the front gate. On his knees, Zoldan cleared the area around the mine as a warning to his American pursuer, who by then had caught up. The man now noticed the mine and, Zoldan said, “wobbled.” He blew a whistle; a flock of soldiers ran up to see why.

One was the Jewish soldier from Brooklyn. Zoldan walked the field with him, identifying each mine that the Germans had him plant precisely 15 paces apart. “I worked with the corporal every day,” Zoldan said.

Zoldan had survived Auschwitz, but was put on a train bound for Mauthausen as the Russians approached and the Nazi killing machine still had unfinished business with the Jews. After just a few days at Mauthausen, he was force-marched 2 1/2 miles to the Gusen 2 camp, where he’d lost an older brother, Yaakov Shmuel, to a leg disease. Along with two brothers, who also survived, Zoldan was marched to Gunskirchen a month before the Americans stumbled upon it.

His parents, two older sisters and a brother had been turned into ash on a single Auschwitz day.

After the war, Zoldan was interned yet again, this time by the British, in Cyprus. He made it to prestate Israel on Jan. 14, 1947. He lived there nearly seven years before journeying to New Jersey to visit his sister for a month, but ended up staying because he had met his future wife.

As Zoldan related the land mine incident to the ex-soldiers and ex-prisoners, an elderly man listened attentively. So did a woman sitting with him, who soon planted a kiss upon Zoldan’s cheek.

But who was Zoldan to her, a man whose name she’d never heard?

His name is one the woman will surely remember. In his familiar role of the pursued, Zoldan had jeopardized his hold on the cans of beans to save the life of a soldier he’d never met — someone who might, fatally, have entered a minefield had Zoldan not remembered the mines.

She will remember because, as she kissed Zoldan, she said, “You saved my grandfather’s life.”

(Please email Hillel Kuttler at seekingkin@jta.org if you survived Gunskirchen and would like to reconnect with members of the 71st Infantry Division. If you would like “Seeking Kin” to write about your search for long-lost relatives and friends, please include the principal facts and your contact information in a brief email. Seeking Kin” is sponsored by Bryna Shuchat and Joshua Landes and family in loving memory of their mother and grandmother, Miriam Shuchat, a lifelong uniter of the Jewish people.)