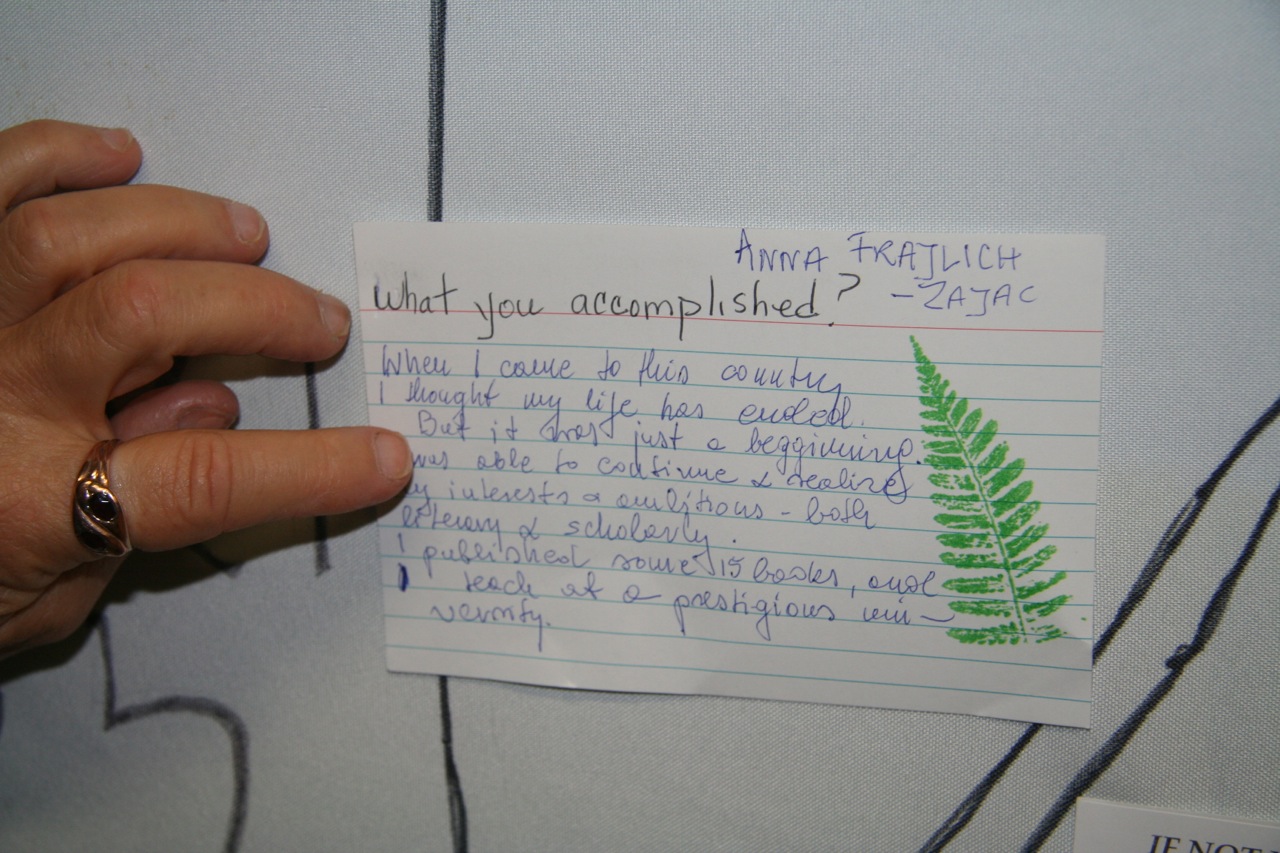 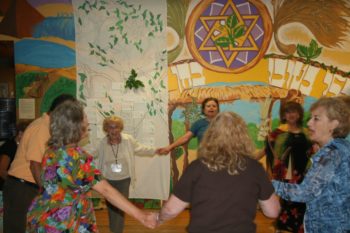 Participants at the Isabella Freedman Senior Camp in Falls Village, Conn., dancing next to the tree mural they created, with notes expressing the accomplishments in which they take the most pride and their hopes serving as the leaves. (Courtesy Isabella Freedman Jewish Retreat Center)

WASHINGTON (JTA) — Not many people attend summer camp with their parents. Mindelle Pierce went with her mom when her mother was in her 90s.

They chose a two-week program for senior adults at the Isabella Freedman Jewish Retreat Center in Falls Village, Conn. Aside from typical camp activities such as swimming and arts and crafts, there were myriad specialty programming for senior adults: lectures on health and nutrition, genealogy, flowers of the Torah, and biblical prophets, as well as trips to area cultural activities, including the theater and the philharmonic.

Some 80 participants ranging in age from their 50s to 90s attended the camp.

Pierce, who is in her 60s and volunteers regularly at Isabella Freedman’s senior camps, said she was drawn to the program five years ago by the “natural beauty infused with the spirituality that I felt while I was there — and the fact the programming was exceptional.”

That has made for a challenging environment for Jewish senior camps, too. In September, one such camp, the Block and Hexter Vacation Center in Pennsylvania’s Pocono Mountains, closed in September due to lack of demand. With more resorts available in exotic locales and seniors more active than they were a few decades ago, mountain camps have lost some of their cachet.

“The new senior is more active and discriminating in taste than the senior of prior generations,” said Elliot Forchheimer, assistant director of the New Jersey Y Camps, which runs the Kislak Adult Center offering sightseeing itineraries to places such as Florida, the Poconos and Texas.

To help stem the tide, some camps have changed or are planning changes to their offerings in hope of attracting a new generation of older adults.

“With tweaks and changes, these programs should be able to thrive,” said Adam Weinstein, director of the Berkshire Hills Emanuel Camps-Adult Vacation Center in Copake, N.Y., which offers kosher food and Shabbat services.

“We’re looking at programs that will also bring in a younger crowd of seniors,” said Irene Drantch, director of the Circle Lodge Retreat in Hopewell Junction, N.Y., an 85-plus-year-old facility that is affiliated with Workmen’s Circle and draws anywhere from 25 people a week to a capacity participation of 135 for its Yiddish Week.

At Berkshire Hills, there are plans are to split the 10-week summer into two five-week programs. One session will be geared to those who have been coming for years and aren’t seeking changes, Weinstein said.

“There’s swimming, there’s lectures, there’s evening entertainment, there’s buttermilk in the afternoon,” Weinstein said, noting that some 600 campers came this past summer — about half for the full summer and the rest for one or two weeks. Most were in their 70s and 80s.

The other session will be aimed at younger seniors, allowing them to take advantage of both the facilities and nearby attractions, including the U.S. Military Academy at West Point, the Norman Rockwell Museum and Hyde Park, the home of Franklin and Eleanor Roosevelt.

“By splitting our summer between our traditional senior program and a program that is more like a Jewish version of Road Scholar, we are trying to make that transition” to younger seniors, Weinstein said, “while still serving the guests who have been our base.”

Pairing sightseeing with educational lectures is the raison d’etre for Road Scholar, formerly known as Elderhostel, which offers about a dozen Jewish programs that explore Jewish culture, history and religion. Jewish programming has been available since the organization was founded more than three decades ago, and Road Scholar works with an array of Jewish organizations, museums, synagogues and educators, according to Stacie Fasola, its associate vice president of public and media relations.

Gerry Suskin went on a Road Scholar trip earlier this year that focused on New Mexico’s conversos and crypto-Jews. The subject matter, not the age of her fellow travelers, is what drew her to the trip, Suskin said.

“I had always been somewhat knowledgeable about what happened during the Inquisition to the Jews,” said Suskin, 75, “but I had no idea until I took this class” that Jews who had been forced to convert ended up in New Mexico.

For Judy Oppenheim of Hampden, Conn., lectures are only part of what has drawn her and her husband, Jerry, both 73, to Isabella Freedman for the past seven years. They’re also taken with the physical setting, the diverse programming, sitting and chatting with Holocaust survivors as well as youngsters in the facility’s children’s camp and the many friends they have made over the years.

“I like being back at camp as an adult,” Oppenheim said. “I always liked it as a kid, and now I look forward to it as an adult.”

For Inge Hershkowitz of the Bronx, N.Y., two weeks at Berkshire Hills last summer was a homecoming of sorts. Back in the 1950s, she and her three sons spent about six summers at what then was a family resort typical of the many bungalow colonies in the area, with her husband joining them on weekends.

This year, she particularly enjoyed the lectures on Jewish humor and outings that included seeing Academy and Tony Award-winner Olympia Dukakis onstage in “The Tempest.”

“I really, really like it,” Hershkowitz, 88, said of the camp. “I already made reservations for next summer.”