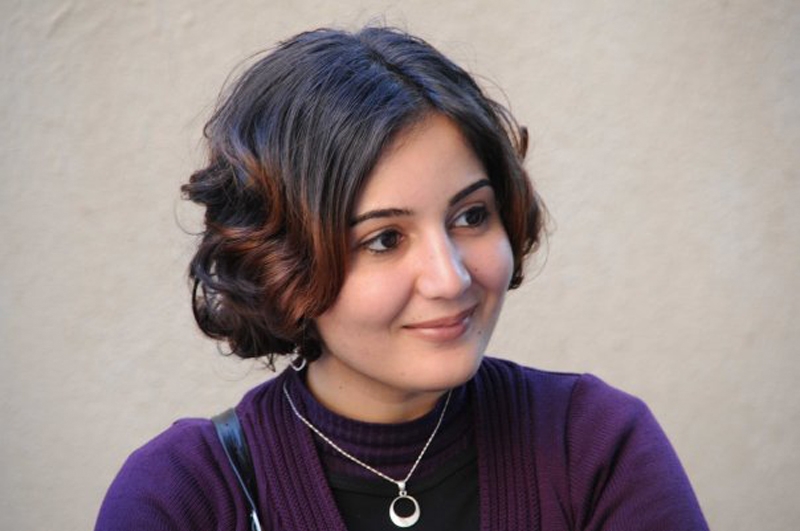 TEL AVIV (JTA) — She can’t stay out of trouble there, but Asmaa al-Ghoul always comes back to Gaza.

A secular, feminist Palestinian journalist, al-Ghoul, 30, has been harassed by Hamas. She’s also been beaten and arrested by Hamas police for protesting its Islamist policies and suppression of human rights.

But unlike most residents of the impoverished coastal strip where Hamas reigns, al-Ghoul has been able to get out, traveling as far as South Korea and spending considerable time in Europe in the course of her work. On Wednesday she will be in New York to receive the Courage in Journalism Award from the International Women’s Media Foundation.

Then she will return to Gaza City.

“I tried to stay in Europe and outside” Gaza, she told JTA in a recent phone interview from Cairo. “In Gaza there are my son and my mom. At least in Gaza I am near my home because all of my family is in Rafah,” the Gazan refugee camp where she grew up.

Al-Ghoul began her career nine years ago as a news reporter for the Al-Ayyam newspaper. But as she saw ongoing violations of human and civil rights, she had trouble keeping her opinions to herself. In 2007, al-Ghoul published a piece criticizing her uncle, a Hamas leader, for beating rival Fatah Party activists in their homes. In response, she received death threats.

Undeterred, al-Ghoul has since opposed Hamas in word and deed. She attends weekly women’s protests in Gaza City advocating for Palestinan unity between Hamas and Fatah, and has been arrested for walking with a man on a beach and for riding a bicycle — both banned by Hamas. Unlike Gaza’s many religiously conservative women, al-Ghoul poses for pictures in a T-shirt and jeans with her hair uncovered.

A vocal advocate of democratic reform in Gaza, she says that Hamas’ repressive policies hinder the national aspirations of Palestinians and peace with Israel. Al-Ghoul traveled to Cairo to support the Arab Spring revolution there last year, and has been a continual promoter of a Palestinian unity government.

Reporters Without Borders in its file on the Palestinian territories says that “journalists condemning Hamas policy remain targets for intimidation, assault, unfair arrest and abusive imprisonment.”

“You cannot choose to be neutral all the time,” said al-Ghoul, who now works for Lebanon’s Samir Kassir Foundation, which advocates for media freedom. “I tried to be neutral and write about people, but then I found myself as part of the scene, so I started to blog about the government and about life in Gaza. In your blog you can be yourself.”

Although she is a fierce advocate of women’s rights, some of al-Ghoul’s most vocal opponents are religious Muslim women. She says that Gaza’s secular and Islamist camps both have strong female contingents, and that “this is healthy, to see all these voices in the same small area.”

But al-Ghoul’s criticism of Hamas does not make her pro-Israel. She recalls watching her father being beaten by Israeli soldiers in the first intifada, during the Islamic holy month of Ramadan, as the rest of the family hid in the bathroom.

“I was fasting and we were crying a lot,” she said. “My mouth gets dry now when I remember that day.”

She also is quite critical of the Israeli military’s Operation Cast Lead in Gaza during December 2008 and January 2009, in which 13 Israelis and approximately 1,400 Palestinians were killed.

Al-Ghoul says she eschews violence and hopes one day to see peace between Israelis and Palestinians.

“I believe in peace,” she said. “I hate war, and as a writer I cannot deal with war and revenge and blood. I don’t want to see people die again. Why should you hate the other?”

The daughter of an architecture professor, al-Ghoul remembers curling up in a small room as a child reading whatever books she found on her father’s shelf — even if they were Islamist texts.

“My father used to behave with me very liberally, discussing everything,” she said. Although al-Ghoul had both brothers and sisters, she said her father “never made a difference between us. He treated us the same.”

Now married with children of her own — an 8-year-old boy and a baby girl — al-Ghoul says she doesn’t have much time for fun or relaxation, though she called spending time with her children “the most beautiful time in the world.”

And though she is not a religious Muslim, al-Ghoul says her faith in God has helped her through hard times.

“We all have one God, so I believe in this God,” she said. “It’s very easy to be a believer. You become strong and at the same time you will see peace.”

Ultimately, though, she looks to her writing to sustain her.

“I love to express myself,” she said. “To keep myself alive in this situation, I should write more and more.”