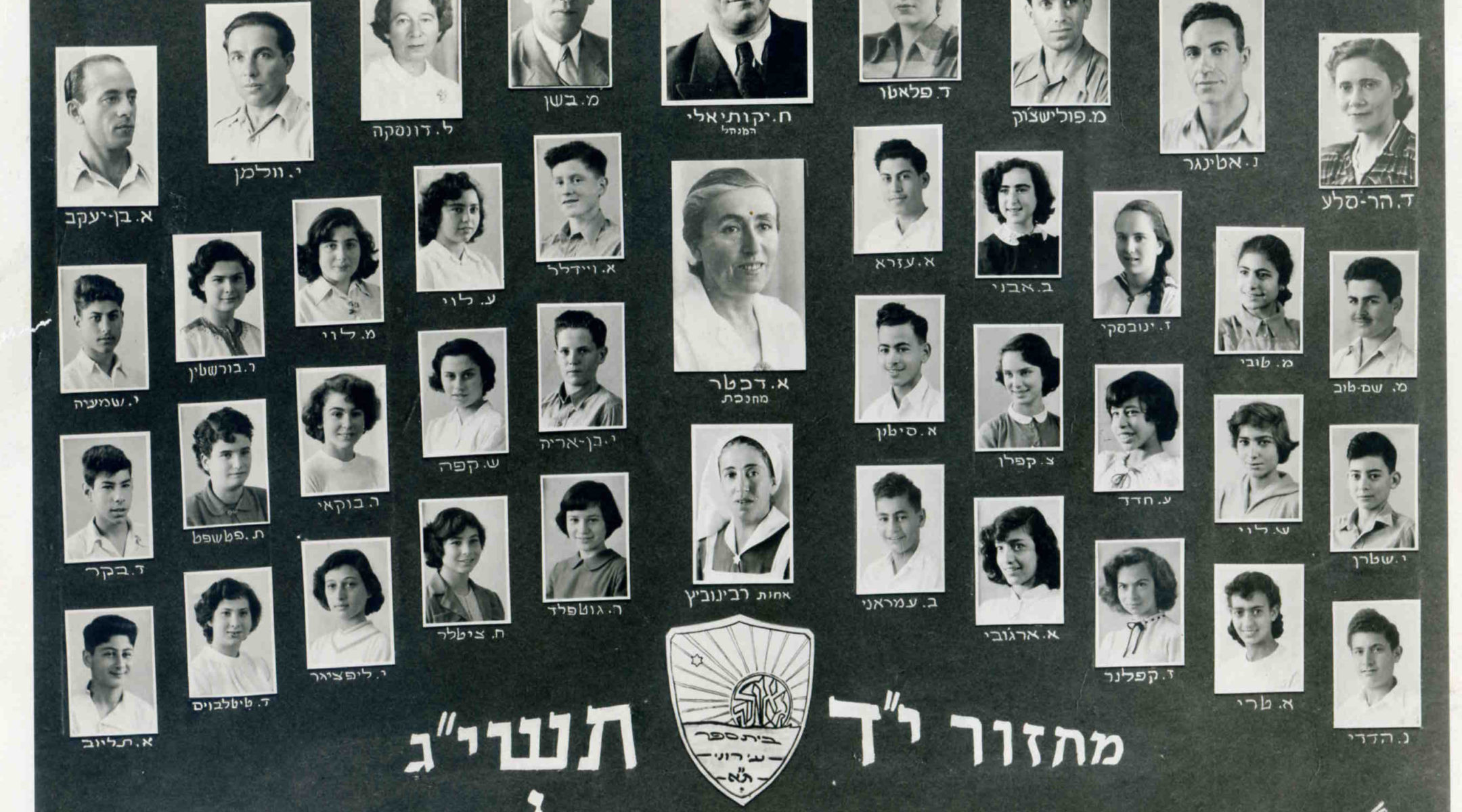 Next summerâ€™s reunion of the 1953 graduating class, shown here, of Tel Avivâ€™s Geulah Elementary School will be "like going back to your roots," said one student, Sarina Schroeder. (Courtesy Ora Bogomolny)
Advertisement

BALTIMORE (JTA) — Whenever Toronto resident Ora Bogomolny would return to Israel to visit her mother, she’d pass a hostel on the corner of Allenby and Hayarkon streets in downtown Tel Aviv.

Seeing the building that once housed the Geulah Elementary School summoned images of the two-person desks, the gymnasium’s pommel horses and wall-climbing ladders, and playing at the beach nearby.

More powerful was the warm sense of family that the former Ora Terry had felt by being among the classmates, her friends. Her mother worked, so Bogomolny spent many hours after school with them.

“Because I was an only child, my friends were very, very important to me,” Bogomolny said. “I needed them more than they needed me.”

Bogomolny, 74, has long thought of organizing a class reunion. Her husband, Eddy, always seems so happy at reunions hosted by his Niagara Falls and Montreal schools, she said.

Only recently, though, did Bogomolny start arranging one of her own, and the timing is impeccable: Next June will mark 60 years since the graduation of her Geulah class.

The school isn’t around anymore and Bogomolny did not maintain contact with any classmates, so she started from scratch to locate them. But Bogomolny has since accounted for nearly all 29 classmates, plus others who had left before the June 1953 graduation.

Just five people remain unaccounted-for, and Bogomolny hopes “Seeking Kin” can help find Avraham Guyer, Ziva Kapelner, Aliza Levy, Sarah Levy and Tamar Petshpat. Bogomolny does not know the married names of the four females, but heard from a classmate that Petshpat may have changed her surname to Green.

The reunion date isn’t set — Bogomolny is juggling the preferences of those in the Diaspora. One person asked that the reunion coincide with his planned trip to Israel for a wedding in May; another will be in Israel for Passover; another will celebrate a wedding anniversary there in July.

“As hard as it was for me to find them, it’s hard to find a date that works,” she said.

And the finding WAS hard, with the stops and starts that characterize most serious quests for people and information.

Bogomolny began with the class picture, which provided just enough to launch the search: Last names, but only first initials, appeared beneath each person’s visage. Bogomolny’s autograph book offered additional facts, with each handwritten poem or message including the writer’s first name.

While visiting Israel last summer, Bogomolny was interviewed on the “Hamador L’chipus Krovim” (Searching for Relatives Bureau) radio program. Several listeners provided leads for some of the 22 names of missing classmates that she had recited.

One man she found on Kibbutz Deganya, Yosef Shmaryahu, was so excited to hear from Bogomolny that he suggested an impromptu class reunion before her return to Canada. She resisted, wanting to do the reunion right.

Since the summer, though, some of those living in Israel have gotten together, conversed by telephone or e-mailed thanks to Bogomolny’s having connected them. Bogomolny, too, exchanges calls and emails with some people she’s found. Every two weeks she speaks by phone with Rivka Bukkai, who lives in the Tel Aviv suburb of Holon. She’s also learned that two classmates are dead and three are very sick.

Tracking down one childhood friend, Sarah Peretz, proved to be Bogomolny’s greatest challenge. She recalled Peretz’s family moving from Tel Aviv to Costa Rica at the beginning of her eighth grade. Bogomolny contacted the Israeli Embassy in San Jose, but it had no record of Peretz’s arrival. Bogomolny later learned why: Peretz’s family hadn’t registered with the embassy because they had traveled on British passports.

“When she called and left a message [stating] that she was looking for Sarah Peretz, and asking whether that was me, I didn’t know what to think,” said Peretz, now Sarina Schroeder, who has lived in Los Angeles for 40 years. “I couldn’t believe it because after 60 years, how can a person find you?”

Schroeder confessed to not having recalled Bogomolny or even the last name of Bukkai, who’d been a close friend.

“One reason I can think of for why I don’t remember anything was I was taken from Israel, from my friends, to Costa Rica,” Schroeder said. “Maybe I was in shock at that time.”

Still, Schroeder said she retains “a very good feeling” of a happy childhood spent in Israel. As she spoke with “Seeking Kin” last week, Schroeder grasped her own autograph book, which classmates had signed to wish her well upon departing Israel all those decades ago.

When she returns to Israel for the class’s 60th anniversary reunion, Schroeder said, she will bring the little book to show to the people who had penned the good wishes.

“I probably will be very emotional and very happy, and I will try to make connections with whoever wants to,” Schroeder said of the event. “It is going back to your roots. I have to see all these people, to remember, to live a little bit of that time again.”

All this is music to Bogomolny’s ears. She used to make the 15-minute daily walk to school with five classmates: four girls and a boy. Each one was a Yemenite, including herself. All were poor.

“Everyone did very, very well. I’m proud of them,” Bogomolny said.

It will be good, she added, to see those classmates — to see everyone — again.

(Please email Hillel Kuttler at seekingkin@jta.org if you know the whereabouts of the five missing students from the Geulah Elementary School’s class of 1953. If you would like “Seeking Kin” to write about your search for long-lost relatives and friends, please include the principal facts and your contact information in a brief email. “Seeking Kin” is sponsored by Bryna Shuchat and Joshua Landes and family in loving memory of their mother and grandmother, Miriam Shuchat, a lifelong uniter of the Jewish people.)