WASHINGTON (JTA) — Americans for Peace Now called on President Obama to support the Palestinians’ bid to upgrade their status in the United Nations to non-member observer state.

The stance by the left-wing group issued in a statement Tuesday places it at odds with others in the pro-Israel community. The statement by the group’s president and CEO, Debra DeLee, was issued two days ahead of the anticipated vote in the U.N. General Assembly on the Palestinians’ application for enhanced status.

“In the wake of the latest Gaza War, we believe the international community, led by the Obama administration, must take urgent action to restore faith in a negotiated two-state solution to the Israeli-Palestinian conflict,” DeLee wrote.

A number of major Jewish groups, including the American Jewish Committee, the Anti-Defamation League and B’nai B’rith International, oppose the bid and are lobbying against it among U.N. member nations.

Some leading lawmakers in Congress have threatened to cut assistance to the Palestinian Authority should its affiliated Palestine Liberation Organization press ahead with the bid.

J Street, also a left-wing pro-Israel group, released a position paper that did not take a position on the bid but pledged to oppose any effort to penalize the Palestinians for making it.

DeLee called on “all nations, including the United States and Israel,” to endorse the Palestinians’ request and “should likewise refrain from and reject punitive measures against the Palestinians in the wake of this initiative, including efforts by Israel or any other party to exploit this initiative as a pretext for actions that further erode the possibility of peace.”

The PLO was rebuffed last year in its bid to have the U.N. Security Council recognize Palestine as a state; the United States successfully lobbied against the move, threatening to use its veto.

There is no such veto in the General Assembly, where the Palestinians have an assured majority. Observer state status does not carry with it the privileges of full membership; observers must still apply to become members of U.N. constituent groups. The PLO is currently a non-member observer entity. 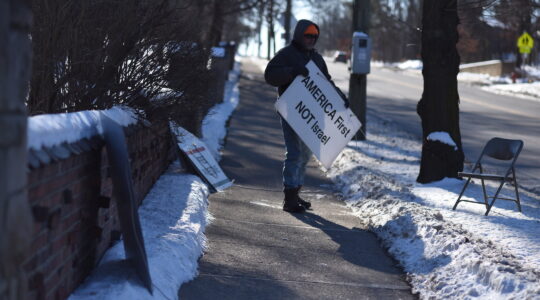