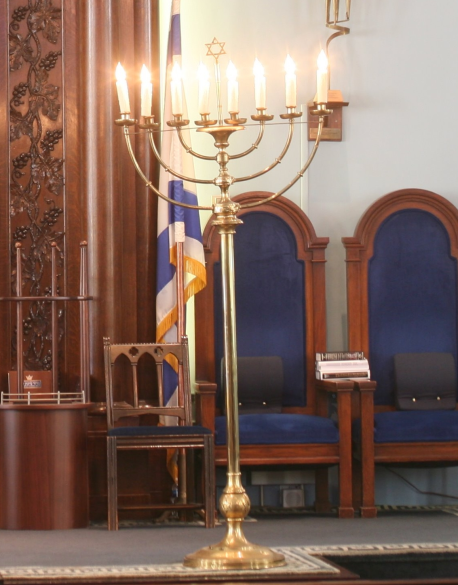 WASHINGTON (JTA) — It has become something of a White House Chanukah tradition.

For the second time, the Obama White House used a menorah from a hurricane-hit region to mark the holiday.

This Chanukah, Rabbi David Bauman brought to the White House one of two 90-year-old menorahs that survived when Hurricane Sandy ravaged Temple Israel in Long Beach, N.Y. The menorah used in 2010 at the White House was from a New Orleans synagogue hit by Hurricane Katrina.

“This 90-year-old menorah survived, and I am willing to bet it will survive another 90 years, and another 90 years after that,” Obama said before the lighting of the candles Thursday night at the White House Chanukah party. “So tonight, it shines as a symbol of perseverance, and as a reminder of those who are still recovering from Sandy’s destruction — a reminder of resilience and hope and the fact that we will be there for them as they recover.”

Jarrod Bernstein, the White House’s 32-year-old director of Jewish outreach, was behind the choice of candelabra. He told JTA that Jewish organizational efforts to help rebuild communities — Jewish and non-Jewish — hit by Sandy fit perfectly with President Obama’s emphasis on getting relief to the Northeast in the storm’s wake.

“Having a menorah with meaning allows us to embody the best spirit of Jewish experience, in the middle of what is a national challenge,” Bernstein said. “There is a Jewish dimension to this — the American Jewish community is ‘working to make this a more perfect union’ as the president often calls it.”

Bernstein described his “aha” moment during a drive to visit family in New York, where he served for years as a community outreach official for Mayor Michael Bloomberg. He had been agonizing about what would serve as the most potent symbol joining the holiday with Obama administration policy.

His wife, Hildy Kuryk — who also happens to be the Democratic National Committee’s finance director — suggested a menorah from one of the many New York-area synagogues hit by Sandy.

“The story of what’s going on there — the rededication and re-sanctification of these communities, there’s definitely a correlation” with Chanukah, Bernstein said.

Bernstein contacted the Metropolitan Council on Jewish Poverty, a group he was familiar with from his Bloomberg days and which he admired for working with both Jewish and non-Jewish communities. That led him, in turn, to Temple Israel, established in 1920.

The seven-foot brass menorah is one of a pair dating from at least the building’s 1923 construction, said Rabbi David Bauman, interviewed as he ferried the menorah to Washington for the party. They were spared because they were on an upper floor.

Bauman said he at first didn’t believe the White House was on the line. When he understood it was for real, he said, it was like a ray of light.

He recalled Psalm 30, associated with the dedication of the ancient Temple in Jerusalem: “Weeping may stay for the night, but rejoicing comes in the morning.”

Bauman said he hoped the Chanukah party would garner attention not only for the synagogue, but for his neighbors.

“The region and my synagogue’s devastation with Hurricane Sandy, has been incredibly dark,” he said. “Coming to the White House is not only an honor for us but for the entire region.”

Bauman, 41 and a reserve chaplain in the U.S. Marines, leads a nondenominational shul that he describes as “Conservadox” with both separate and mixed seating. There is also a beit midrash; much of the damage was to holy books and Torah scrolls.

The damage, he said, totaled $5 million, and insurance covered just a fraction of that. Moreover, his institution — like other houses of worship — are not necessarily entitled to the federal recovery money because of religion-state separation.

“Hopefully, this will be a way for us to get the story out and raise some money to rebuild,” he said.