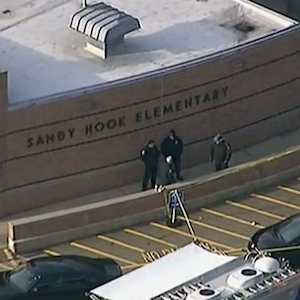 JERUSALEM (JTA) — An Iranian state-run media outlet reported on an Arizona businessman’s claim that Israel is behind the massacre at Sandy Hook Elementary School.

PressTV, Iran’s 24-hour English language news network, cited an interview with Michael Harris, who said that the massacre was an Israeli mission to teach President Obama a lesson. Adam Lanza, the man police have identified as the killer, was made the “fall guy.”

Harris, who PressTV identified as a former GOP candidate for governor of Arizona, publicly associates with neo-Nazi groups, according to the Washington Post.

In the interview, Harris cites what PressTV calls inconsistencies in the “cover story” of the massacre in Newtown, Conn., calling it a “terrorist attack.”

PressTV quotes Harris as saying: “The facts are now becoming obvious. This is another case where Israel has chosen violence and terrorism where their bullying in Washington has failed. Israel believes the U.S. ‘threw them under the bus,’ particularly after the recent Gaza war, allowing Israel to be humiliated in the United Nations. Their response was to stage a terror attack, targeting America in the most hideous and brutal way possible, in fact, an Israeli ‘signature attack,’ one that butchers children, one reminiscent of the attacks that killed so many children in Gaza?”

Harris also pinned other massacres by lone gunmen on Israel: “This is exactly what Israel did in Norway; the political party that voted sanctions against Israel was retaliated against by a ‘lone gunman’ who killed 77 children. This is what Israel always does, they go after the children. It is what they do in Gaza every day. It is what was done in Norway. It is what happened at Sandy Hook. Nobody buys the ‘lone gunman’ story anymore, not with the Gabby Giffords’ shooting, not with the Aurora ‘Batman’ shooting, certainly not with Breveik, and certainly not in Connecticut.”