In Israeli campaign, Netanyahu gets hit from the right and left 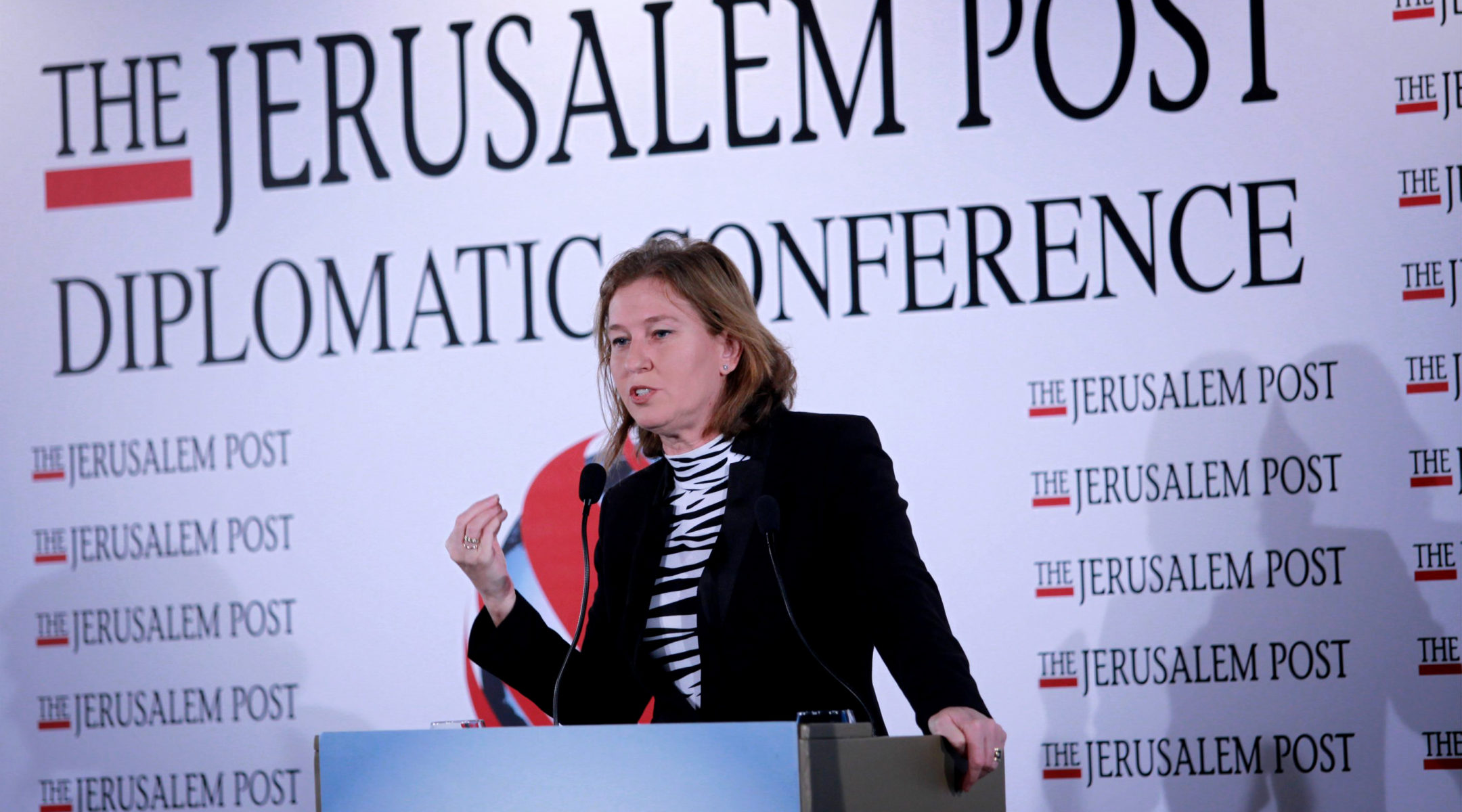 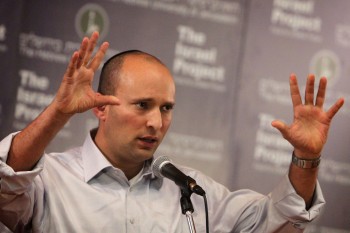 Naftali Bennett, head of the Jewish Home party, speaking at a political debate at the Hebrew University in Jerusalem, Jan. 8, 2013. (Miriam Alster/Flash90) 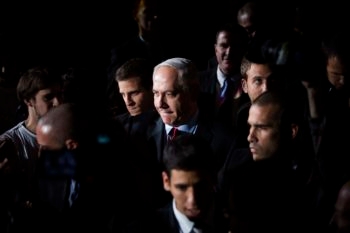 Israeli Prime Minister Benjamin Netanyahu, shwon attending an event at the International Conference Center in Jerusalem on Jan. 7, 2013, must draw voters even as most Israelis expect a victory by his Likud-Beiteinu slate. (Yonatan Sindel/Flash90)

Hundreds of voices rise from a packed dance floor Sunday as Benjamin Netanyahu, Israel’s prime minister, enters the room grinning, singing along with the pounding music overhead and leaning over the stage — somewhat uncomfortably, it seems — to shake hands with supporters.

It’s a rally for Young Likud, the youth wing of Netanyahu’s faction. His picture illuminates a screen behind the disc jockey, and huge banners hang above the dance floor emblazoned with the word “Machal” — the name for Likud that will appear on the ballot in Israel’s Jan. 22 elections.

“For whoever wants to defend and expand the state, there’s only one vote: Machal, Machal, Machal!” Netanyahu exhorts the crowd. “Bring everyone to the ballot box!”

For the prime minister, the message becomes more urgent by the day.

While pundits and polls for months have all but guaranteed him another term, Netanyahu’s path to victory in the past two weeks has hit two major obstacles: an ascendant challenge from the right and a center-left that threatens to unite against him. The result has been a dramatic drop in Netanyahu’s poll numbers.

In October, when Likud merged lists with the nationalist Yisrael Beiteinu party, polls had the joint list maintaining its current 42 seats in the 120-seat Knesset. Now most polls peg the joint list at 34 or 35 seats, with some going as low as 32 — still making it the Knesset’s largest party, but with a much smaller margin.

Instead of moving across the political map, most of those votes have shifted even further to the right — to the hard-line Jewish Home party.

Led by Naftali Bennett, 40, a charismatic former army officer and high-tech entrepreneur whose parents immigrated to Israel from San Francisco, Jewish Home has staked out some progressive social positions on housing and budget reform. On security issues, however, Bennett has taken a hard line. He favors annexing large swaths of the West Bank, firmly opposes Palestinian statehood and has tried to portray Netanyahu as inconsistent on security policy.

Jewish Home traditionally has been the party of Israel’s religious nationalist sector. But Bennett, with his clean-shaven face and barely noticeable yarmulke, has tried to appeal to all sectors of Israeli society. Fifth on his faction’s list is Ayelet Shaked, a secular woman from the traditionally leftist northern Tel Aviv.

“I want to make it possible for anyone to live in Israel, especially young people,” Bennett told a crowd of English speakers in Tel Aviv last month. “We’re opening the party for the religious, secular, for haredim, for everyone.”

Bennett’s hawkishness at times has gotten him into trouble. He suggested that he would disobey an army order to evacuate settlements, and this week Bennett said he would oppose drafting haredi yeshiva students in Israel’s universal conscription. Even so, polls have put Jewish Home at 14 or 15 seats, which would make it the Knesset’s third-largest party after Likud-Beiteinu and Labor. In the current Knesset, Jewish Home has just three seats.

Votes moving from Likud-Beiteinu to Jewish Home, both rightist parties, won’t hurt Netanyahu’s reelection chances because the right-wing bloc will remain the same size, and Likud-Beiteinu still is expected to be the largest party.

What could unseat the prime minister, though, is a center-left majority in the next Knesset. The center-left is split into three major parties: Labor, led by former journalist Shelly Yachimovich; Yesh Atid, which was founded last year by media personality Yair Lapid, whose father was a Knesset member; and Hatnua, the party founded last year by former Kadima leader Tzipi Livni that emphasizes Israeli-Palestinian peace. The latest polls have Labor winning 18 to 20 seats, with Yesh Atid and Hatnua at nine to 11 apiece.

Last week, Livni called on the three parties to unite ahead of the election. Instead of joining a Likud-led coalition, Livni wants the parties to form a “blocking bloc” in the Knesset to stop Netanyahu from leading the government.

But the center-left has been plagued by infighting throughout the campaign. Following an unsuccessful meeting on Monday with the leaders of the three parties, Yachimovich and Lapid accused Livni of using them for “political spin.” Livni is still pushing for unity.

“I’ll obviously be happy if you vote for Hatnua, led by me,” Livni said Tuesday in a video message. “But more importantly, vote for one of the centrist parties. You know what? In these elections there are only two ballots: an extremist ballot and a moderate ballot.”

Even with a fragmented center, recent polls show a tightening race. A poll conducted last week by the Times of Israel noted that 31 percent of voters have yet to choose a party and that most undecided voters are likely to break toward the center-left. And throughout the campaign, majorities of voters have said they care most about socioeconomic issues, which are being championed by Labor and Yesh Atid.

Likud has responded to attacks from the right and left by calling in its campaign for “a strong prime minister, a strong Israel.”

With a comfortable lead in the polls, Netanyahu’s challenge is to draw voters even as most Israelis expect a Likud-Beiteinu victory.

“It’s not every day that a prime minister puts on jeans and goes to hang out in Tel Aviv,” Netanyahu quipped to reporters as he headed into the Young Likud rally. Then he straightened up and said, “A leftist bloc necessitates a strong Likud-Beiteinu.”