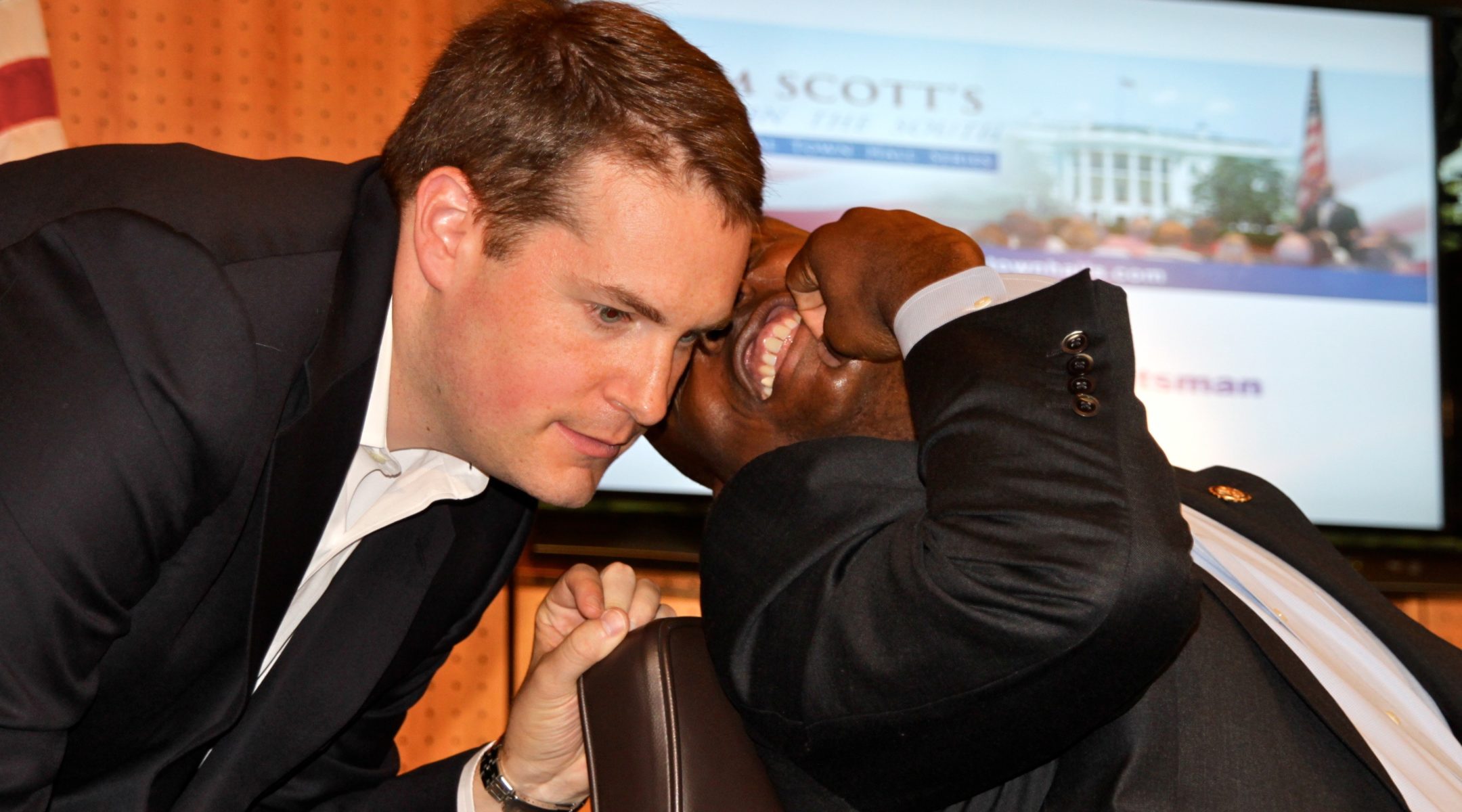 WASHINGTON (JTA) – On a Saturday night following Shabbat, Nick Muzin arrayed on his dining room table what would turn out to be the winning strategy to elect the first black Republican to Congress from South Carolina in more than a century.

The next night at the same table in his Charleston, S.C., home, Muzin hosted his weekly Talmud class.

The ascension of Tim Scott from the South Carolina statehouse to the U.S. House of Representatives — and last December to the U.S. Senate — is relatively well known.

First elected to the House in 2010 as a leader of the Tea Party, Scott won reelection last November before being tapped just a few weeks later by Gov. Nikki Haley to fill the seat vacated by retiring Sen. Jim DeMint. Scott’s quick ascendance, the rarity of his being a black Republican and his Tea Party stature has earned him national attention.

Less well known is the role of Muzin, the Montreal-born doctor, lawyer and Jewish scholar who has been instrumental in paving Scott’s way. Muzin, who is a naturalized American, was a policy adviser on Scott’s 2010 campaign and until December was his chief of staff.

Though Muzin now is director of strategy and coalitions for the House Republican Conference, he also has a role in Scott’s fundraising political action committee.

The close alliance – and friendship — between a black Tea Party Republican from the South and an Orthodox Jewish doctor-lawyer from Canada is a rarity in politics, and upends perceptions about how blacks and Jews interact, Muzin and Scott say.

Scott, 47, is the first to credit Muzin for his success. Without Muzin’s entreaties that Saturday night in January 2010, Scott may not have run for the Charleston-area House seat that opened with the retirement of Rep. Henry Brown.

“Initially, I was fairly reluctant; I did not have my sights set on Washington,” Scott told JTA in an interview. “He was crucial in helping me to get to that conclusion.”

Scott instead had his eye on the state’s lieutenant governorship, which is what first drew the men together in 2009. The lieutenant governor oversees the state’s Office of Aging, and Muzin, a lawyer with an medical degree from Yeshiva University’s Albert Einstein College of Medicine, was interested in health policy. So Muzin sought out Scott, and the two bonded over policy — and curiosity about each other’s beliefs.

“He’d be studying Bible all the time in his office and we would talk regularly about what I was learning in Daf Yomi every day,” Muzin said of Scott. Daf Yomi is the page-a-day Talmud study program. “He had a real appreciation for Jewish people and for religious people.”

The appreciation became evident early in the campaign when Scott told Muzin he wanted to release a statement on the May 2010 clash between Israeli commandos and a Gaza-bound flotilla that left nine Turkish nationals dead.

“I want to go on record saying that Israel was within its rights in international and maritime law to intercept the flotilla since Hamas, a terrorist organization in control of Gaza, has sworn to annihilate the Jewish people and regularly transfers weapons into Gaza,” said Scott, at the time a House candidate in a state where the Jewish vote barely registers.

The notion of an African-American Republican from the South making Israel a focus, as Scott has throughout his congressional career, has even become a target of writers at “Saturday Night Live.” In a skit over the weekend that didn’t make the final cut for the show, cast member Kenan Thompson plays Scott grilling defense secretary nominee Chuck Hagel on his fealty to Israel.

“As an African-American Republican from South Carolina, love of Israel is in my blood,” Thompson said to audience titters.

In Muzin’s case, his political trajectory baffles even some of his friends. In 2000 he rallied for the Gore-Lieberman ticket, but in 2004 he told the Yale Daily News that encounters with liberals at Yale had driven him rightward.

“I find that the student body here is ultra-liberal and extremely intolerant,” Muzin, then vice president of Yale’s conservative Federalist Society, told the campus paper.

Muzin joined George W. Bush’s 2004 reelection campaign as a counsel for the Republican National Committee and served as a medical adviser for the 2008 presidential campaign of Sen. John McCain (R-Ariz.).

In 2006, while working in Washington as an attorney defending physicians and pharmaceutical companies, Muzin began seeing the scion of a prominent Charleston family, Andrea Zucker. Within months, after a surprise proposal in Jerusalem during a trip to Israel, the two were married.

Zucker’s father, Jerry, was a Forbes 400 billionaire who owned, among other properties, the Canadian retail giant Hudson’s Bay Company. The Muzins moved to Charleston to help out with the family business.

“My wife bought me a tourist’s guide to the South,” Muzin said. “She said, ‘See this as an extended adventure.’ I kind of embraced it: I bought a truck, a King Ranch F-150” – a Ford. “I got into boating, I started training to compete in triathlons.”

The truck surprised friends. “I didn’t need it for any reason whatsoever,” Muzin said, laughing. He practiced medicine a day a week at a free clinic and started hosting weekly Talmud classes.

In 2010, with Obama’s health-care reform about to pass, Muzin again turned to medical policy. He sensed that Scott, the success-story son of a single mother, would be an effective spokesman against Obamacare.

“He came over to my house on motzei Shabbos and I laid out a memo and I said, ‘If you decide to run, these are the issues,’ ” Muzin recalled of that Saturday night.

Scott was won over and Muzin was soon running his campaign.

Scott quickly won the endorsement of DeMint and Rep. Eric Cantor, (R-Va.), who was set then to become House majority leader. Scott won the fundraising battle with his most serious challenger, Paul Thurmond, son of the late Sen. Strom Thurmond (R-S.C.), and the primary race before trouncing his Democratic challenger in the general election.

Muzin became Scott’s chief of staff and moved back to Washington, family in tow. He now has three children. He has sold the Ford truck.

Since December, Muzin has been leading the Republicans’ outreach to groups that rejected the party in the last election, noting “Hispanic voters, young and libertarian voters, women, Asians, African-Americans.”

Republicans are debating whether the party’s messaging or more fundamental policy changes are needed on such matters as entitlement spending, immigration and gay marriage. Muzin is focused more on the message.

“Our job in the Republican Conference is to tell people to stop talking about rape,” Muzin quips, referring to candidates in last November’s election who advocated against abortion even in cases of rape and incest. “We have to figure out who our best communicators are and get them on TV instead of people we don’t want to represent us.”

If anyone can pull this off, it’s Muzin, says Noah Silverman, the congressional affairs director of the Republican Jewish Coalition.

“He’s someone who has a natural ability to think in terms of questions that might be on the minds of non-traditional Republican constituencies,” Silverman said.

“We don’t agree on policy at all, but he’s a mensch,” says Tom Kahn, the top Democratic staffer on the House Budget Committee. “He is able to hold strong views and to disagree strongly, but to do it in a very agreeable way.”

Rabbi Levi Shemtov, the director of American Friends of Lubavitch who has known Muzin since his Washington days, says his biography is an example for community outreach.

“It’s pretty obvious that Nick could have done practically anything he wanted in terms of his education opportunity and background,” Shemtov said.

Stuart Feldman, a family friend who was part of the Charleston Talmud class and became a Muzin confidant, says that’s the key to Muzin’s leadership.