Putting the congregation on the bar mitzvah guest list 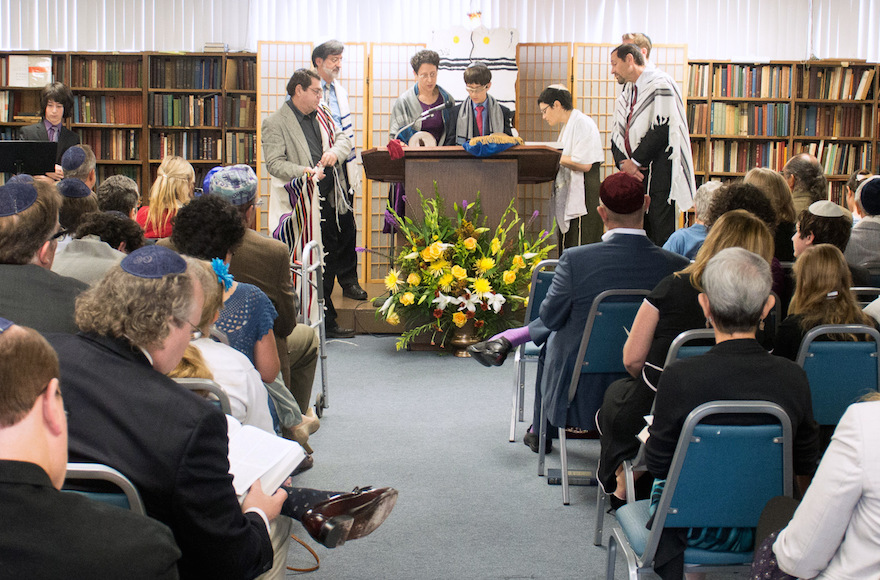 The October 2012 bar mitzvah of Milton Posner at the Movable Minyan, a lay-led congregation in Los Angeles where all the worshipers are invited to lunch and an aliyah is reserved for a minyan member. (Jeremi Peck)
Advertisement

LOS ANGELES (JTA) – More and more families planning bar and bat mitzvahs are taking the advice of Jeffrey Salkin, author of “Putting God on the Guest List,” by making sure to incorporate spiritual elements into their celebrations.

But are we re-examining who else we’re inviting to our b’nai mitzvah?

For many of us, the list is topped by family near and far, then co-workers, neighbors, teachers and those to whose simchas we have been invited.

But what about fellow congregants? Are you inviting them — I mean, all of them?

In a huge urban synagogue, this may be wildly impractical. But many of us belong to suburban synagogues with memberships of 200-300 families but regular Shabbat-morning attendance is just 30 to 50, on a good week. Are those congregants who regularly make the minyan welcome not just to your bar mitzvah service but to your table, too?

“Many rabbis speak regretfully of the ‘privatization’ of bar/bat mitzvah,” writes Rabbi Janet Marder, a former president of the Central Conference of American Rabbis, in an essay on the website of the Union for Reform Judaism. “Almost all of those attending a Shabbat morning service when a bar or bat mitzvah takes place are guests invited by the family.”

She goes on: “When congregants not invited by the family do show up at such services, they often express discomfort, feeling that they are not welcome in the synagogue without an invitation.”

I’ve had this experience myself. After attending a bar mitzvah service to which I was not invited at an out-of-town synagogue, my wife and I had an intense post-service discussion about whether or not we should attend the luncheon.

“They didn’t say you had to be invited,” I remember saying as I looked wistfully at the buffet table. But as we stood in the doorway, neither of us felt comfortable enough to venture in.

Rabbi Steven Silver of Temple Menorah in Redondo Beach, Calif., a suburban Reform synagogue near Los Angeles, insists that his congregants invite everyone who attends services to the lunch following the event.

“You want kids to have this rite of passage in front of their community, not as a private family event,” he said. “It’s not a birthday party but a bonding event to the Jewish people.”

To gain acceptance for his policy, which he says he had to approach “gingerly,” Silver says he explained to parents that while their children were attending Saturday morning services to prepare for their b’nai mitzvah, “they had developed relationships with many of the older congregants” and therefore it had become important “for their children to have them there.”

“We tell them to expect an extra 30 to 35 congregants,” said Silver, who asks that when there is assigned seating, some tables be assigned for the “community.”

For my own children’s bar mitzvahs, held at the Movable Minyan, a small lay-led congregation in Los Angeles, we followed the organization’s policy of inviting everyone to both the service and lunch. Even though there were only 20 or so regulars, the community total came to 60 after adding the spouses, children and extended family of the regular attendees.

Those who have sprung for a kosher bar mitzvah luncheon, beginning at $20 a head can understand easily why Silver had to broach the subject gingerly: It’s expensive!

To help keep down the costs, Silver said his temple hired a cook.

“Ninety-five percent of the parents now support the program. Their kids understand that they have been eating someone else’s bagel, and now it’s their turn to reciprocate,” Silver said.

Larger congregations with higher Shabbat attendance, like Temple Beth Am in Los Angeles, a Conservative temple to which I also belong, take a different approach. According to the temple’s executive director, Sheryl Goldman, b’nai mitzvah families are required to host a kiddush after services for those not invited to the more formal luncheon.

“It can be simple like challah, fruit and cholent, or very elaborate,” said Goldman, adding that the temple only in very special circumstances allows a bar or bat mitzvah in the late afternoon, when regulars are absent.

“We don’t want a private service,” she said. That would be “like a rental of space.”

But how to keep the service that takes place before lunch inclusive and communal?

At Temple Menorah, the fifth aliyah is reserved for the community. That way, Silver says, there is room to call up to the Torah a congregant who is getting married, has an anniversary or has some other compelling reason for an aliyah in addition to the family tree of b’nai mitzvah attendees who will be called up for the simcha that day.

Movable Minyan also reserves an aliyah for a minyan regular. I remember discussing with my wife who in our community we thought had welcomed and included our kids and should get the aliyah. On the morning when that person was called up, we felt the communal circle of “l’dor v’dor,” generation to generation, had been completed.

As Silver said, “The community validates the bar mitzvah.”