Merely opulent or way overboard? Marking a rite of passage in high style 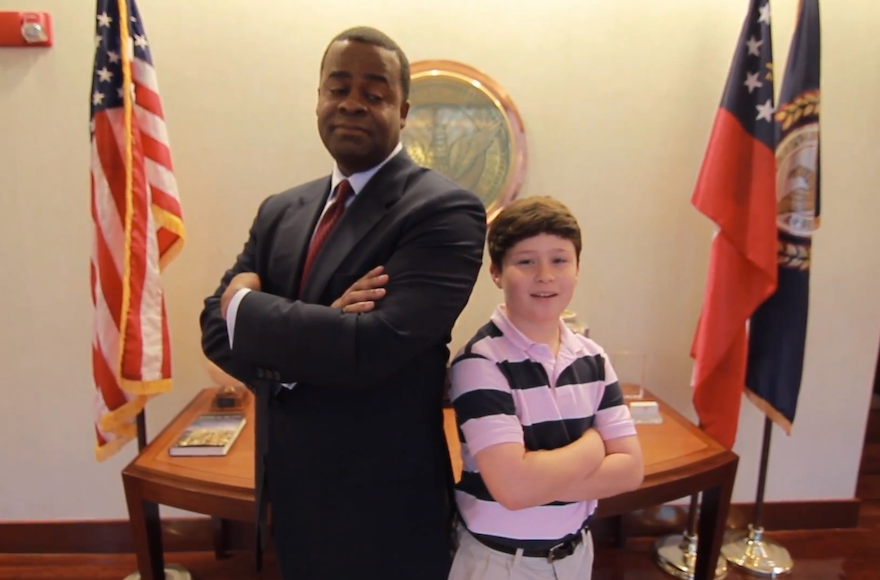 NEW YORK (JTA) — Dressed in a black-and-white tuxedo and surrounded by a Secret Service detail, former President Bill Clinton greeted well-wishers at a bar mitzvah held at an upscale hotel in Los Angeles, shaking hands with guests and patiently posing for pictures. Once everyone had arrived, the president turned to the audience to introduce the guest of honor.

“Ladies and gentlemen,” he said. “It is my distinct honor to introduce the next president — and the first Jewish president — of the United States of America!”

“Hail to the Chief” began playing from loudspeakers and a 10-foot model of the Washington Monument in the center of the room opened up to reveal an ebullient young Jewish teenager waiting inside.

The bar mitzvah had officially begun.

“The kid had been the class and school president, so he wanted a presidential theme,” said Jay Shwartz, the Los Angeles party planner who organized the affair. “We put up balloons in red, white and blue all over and had models of the Lincoln Memorial, Mount Rushmore and the White House.”

Themed bar mitzvah parties are nothing new. As long as American Jews have had a taste for the tacky, there have been parties inspired by cheesy Hollywood films and nearly forgotten pop stars. But the combination of growing Jewish affluence and the availability of new technological toys are driving the trend into the 21st century.

“Everybody’s trying to be creative and do something different than the other person,” said Joel Nelson, whose San Francisco Bay Area company has been producing bar mitzvahs for 31 years.

Some years ago, Nelson helped a family stage an “Alice in Wonderland” baT mitzvah in a rented warehouse on Treasure Island in San Francisco Bay. The party featured the Cheshire Cat, Mad Hatter and other characters walking around, as well as a section designed to look like the Mad Hatter tea party.

“There are very few who spend that kind of money, it’s not the norm,” Nelson said. “Sometimes I wonder if it might be a business write-off. But if you have one kid and you own a company in the Silicon Valley, then I can understand why you might want to put up a party.”

Increasingly, some of the money dropped on a lavish bar mitzvah isn’t even spent on the event itself but on its promotion. Last week, a YouTube video urging viewers to “save the date” for Daniel Blumen’s bar mitzvah went viral. The video, shot at locations around Atlanta and featuring a cameo by Mayor Kasim Reed, has the bar mitzvah dressed in an Atlanta Falcons jersey and draped in bling, rapping that the party “won’t stop till Sunday morn.”

Blumen’s spot was featured on the “Today” show, ABC News, CNN and even London’s Daily Mail. More than 130,00 people have viewed it online.

“It’s getting more and more outrageous,” said Sara Lowell, a high-end party planner in South Florida. “In one, the bar mitzvah boy has been kidnapped. In another, he’s flying a jet. If the dad knows the Miami Heat, he’ll get the players to make an appearance in the video to wish him a happy birthday.”

One highlight of the over-the-top bar mitzvahs is the guest of honor’s entrance, which can take on the form of a Vegas spectacle. Boys and girls celebrating the onset of adulthood make entrances accompanied by NFL cheerleaders, descending from the ceiling by a rope like Peter Pan or cruising into a room driving a miniature Ferrari.

“It’s a big deal,” said Alex Einhorn of Siegel Productions, a company in Boston specializing in planning bar mitzvahs. “Once they make the entrance, the stress is off. It’s a statement saying I’m here and I’m excited to celebrate with you.”

In 2008, the excesses of contemporary bar mitzvahs became a national issue when the New York Post reported on a New York affair that reportedly had cost $1 million. The bat mitzvah made her entrance by donning a Catwoman suit and descending by a rope to the floor of Cipriani, a swanky Manhattan restaurant. Upon landing, she was serenaded by rock star Jon Bon Jovi for 45 minutes.

“My husband did well that year and he was proud of himself, and he wanted to throw a huge party,” Liza Sandler, the girl’s mother, was quoted as saying.

The tendency to go a little overboard is by no means a uniquely American phenomenon. In Israel, a bar-bat mitzvah trend has celebrants surprising their guests by jumping out of objects — soccer balls, Torah scrolls and oversized hearts, to name a few.

A video of a bar mitzvah performing an elaborate song-and-dance number after emerging from a giant clam went viral last year on YouTube, gaining more than 100,000 views. Kiril Shahaf, the director of Ilanit Noy Productions, located near Haifa, credited his boss with creating the popular routine, which he called “The Pearl.”

“She was the first to do it six years ago and then everybody else stole our idea,” he said. “ ‘The Pearl’ is more popular today than it ever has been. It’s a huge attraction, and girls love it because they can put on a show in front of their friends and families.”

The lavishness and cost of some of the bigger bashes has been mercilessly mocked online and criticized from the pulpit, to little apparent effect. Rabbi David Wolpe of Sinai Temple in Los Angeles said he has sought repeatedly to rein in over-the-top Jewish soirees. A few affairs he attended were so outlandish, he felt compelled to say something to the parents.

“I tell them they are giving the wrong message to the child, never mind to the community,” Wolpe told JTA. “Sometimes they are under the impression that the religious value is commensurate with the value of the event. That is not true.”

Lowell, the Florida party planner, admitted some of the showier bar mitzvahs were narcissistic and had more to do with parental ambitions than a child’s desires. Nonetheless, she said there was nothing inherently wrong about putting on a show, as long as it combined substance with style.

“At the end of the day, the message children need to learn is that this is a coming-of-age celebration,” she said. “You look for depth and spiritual meaning, and if that is lacking, no matter how much money you spent, it’s ice cold.”