Long the bane of Venezuelan Jews, Chavez is gone. Now what? 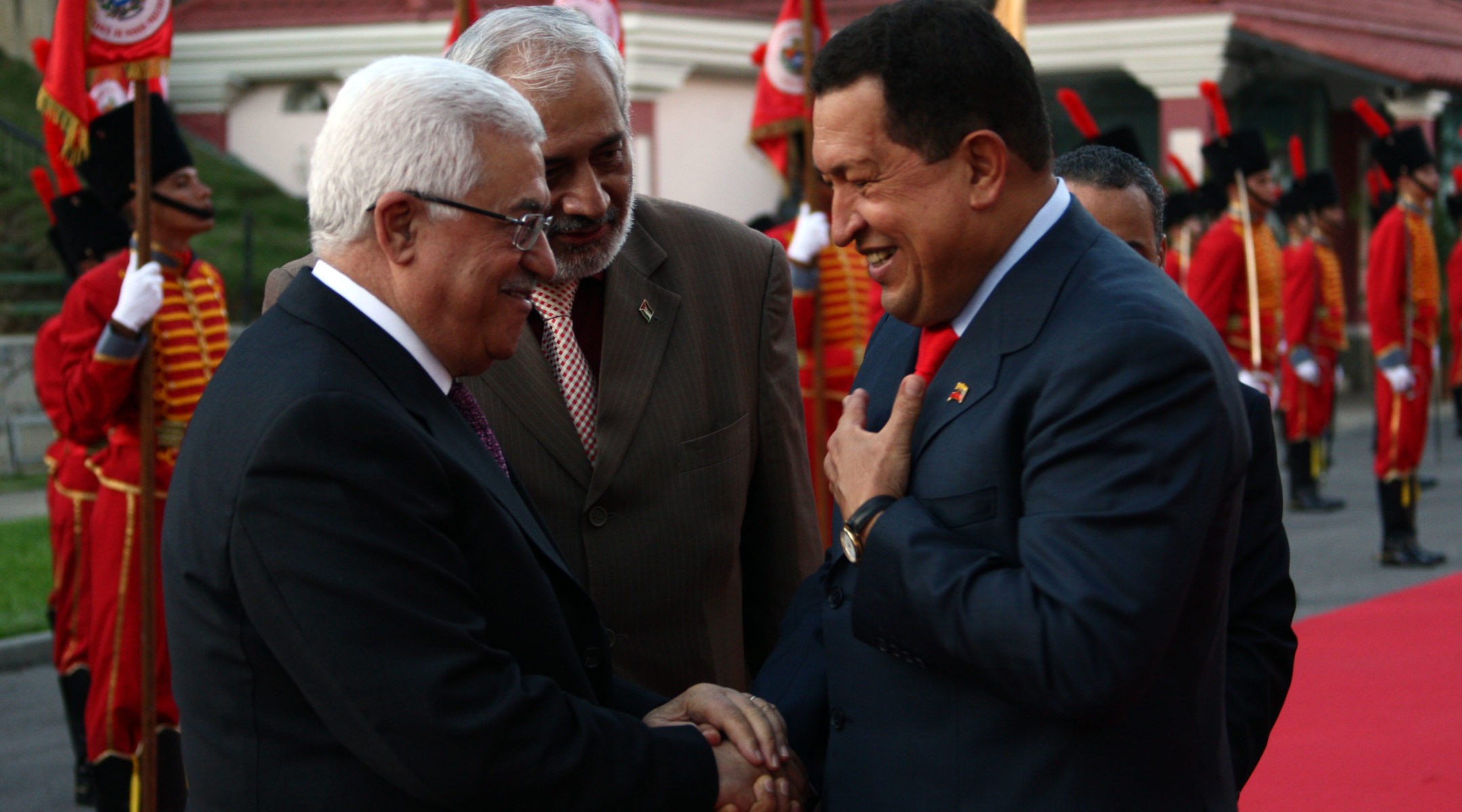 (JTA) — For more than a decade, Venezuelan Jews have been holding their breath, subject to the whims of a mercurial president who used his bully pulpit to intimidate, rail against Israel and embrace Iran.

There was the police raid of a Caracas school in 2004, allegedly to search for evidence in the high-profile murder case of a prosecutor. There were the demands by President Hugo Chavez when war broke out between Israel and Hamas in December 2008 that his country’s Jews rebuke Israel for its conduct in Gaza. There was Chavez’s warm alliance with Iranian President Mahmoud Ahmadinejad. There was the use of state radio to spread anti-Semitic canards.

Most recently, there were revelations that Venezuela’s intelligence service, SEBIN, was spying on the country’s Jewish communty.

While Chavez never explicitly threatened the Jews of Venezuela, his frequent harassment and staunchly anti-Israel positions kept them continually on edge. Afraid to criticize their president, the Jewish community found itself in a predicament that took on a frightening resemblance to the one faced by Jews in another staunchly anti-Western, anti-Zionist country: Iran.

But even with Chavez gone, felled by an undisclosed cancer at age 58 just weeks into his fourth term, Venezuelan Jews aren’t quite ready to exhale.

For one thing, Chavez leaves behind a country wracked by violent crime and mired in economic turmoil. For another, Chavez played such a commanding role in Venezuelan life and politics that nobody is quite sure what will happen to the country.

Perhaps most notably for Venezuela’s Jews, far fewer of them are still around to find out.

Over the past 14 years, Jews have been leaving the country in droves. When Chavez was elected in 1999, there were more than 20,000 Jews living in Venezuela. Today the community is estimated to have fallen to less than half that number. During the more challenging years of Chavez rule, Jewish organizations even developed a plan in concert with local Jews for the evacuation of the country’s Jewish community should the need arise. The plan is still on the shelf.

Jews were not the only ones to take flight from the Chavez regime. Hundreds of thousands of upper- and middle-class Venezuelans left during the Chavez years, seeking to escape Venezuela’s anti-business climate, the government’s nationalization of private companies, economic crises and a soaring crime rate. Jews left for many of the same reasons, with anti-Semitism by all accounts taking a back seat to concerns for economic and physical security.

With Chavez gone, there is an opportunity for change. But it’s far from clear things will improve for the Jews of Venezuela, at least in the short term.

Venezuela’s constitution appears to require that new elections be held within 30 days. In his final months, Chavez made clear his preference that his vice president, Nicolas Maduro, take over Chavez’s so-called Bolivarian revolution. The likeliest opponent to Maduro, who has echoed Chavez’s anti-Western rhetoric, is Henrique Capriles Radonski, who lost to Chavez by an 11-point margin in elections held last October.

Capriles, who identifies as a Catholic, also happens to be the grandson of Holocaust survivors — a fact Chavez exploited in launching anti-Semitic attacks against him.

During the 2012 presidential campaign, state-run media urged Venezuelans to reject “international Zionism” and vote against Capriles, describing him as having “a platform opposed to our national and independent interests.” Chavez also said the Mossad, Israel’s secret service, was out to kill him and accused Israel of financing Venezuela’s opposition. Government media described Capriles as “Jewish-Zionist bourgeoisie.”

The Anti-Defamation League and the Simon Wiesenthal Center condemned Chavez for his rhetoric.

The campaign was typical Chavez, only the latest in a long series of episodes that left Jews feeling deeply unsettled in a country that before Chavez had remarkably little anti-Semitism.

The first signs of trouble under Chavez came during the years of the second intifada, when the government sponsored rallies in support of the Palestinian cause. After one such rally in May 2004, the Sephardic Tiferet Israel Synagogue in Caracas was attacked.

But it wasn’t until November of that year that Venezuelan Jews felt directly targeted by the government, when security forces carried out an armed raid on a Jewish school in Caracas, Hebraica. The incident was described in a report by Tel Aviv University’s Stephen Roth Institute for the Study of Contemporary Antisemitism and Racism as “perhaps the most serious incident ever to have taken place in the history of the Jewish community” in Venezuela.

Chavez kept up his anti-Israel and anti-Western rhetoric throughout the 2000s, calling U.S. President George W. Bush a devil during a 2006 speech at the United Nations and linking Israeli and American “terrorist” policies. During the 2006 Lebanon War, Chavez accused Israel of perpetrating a “new Holocaust” and using Nazi-like methods to kill Lebanese and Palestinians.

Meanwhile, Chavez nurtured an ever-closer relationship with Iran. The seemingly incongruous friendship between Chavez, a secular socialist, and Ahmadinejad, president of an Islamic theocracy, was built around shared hostility to the United States, the West and Israel. The two leaders sharply increased bilateral trade, inaugurated weekly flights between Caracas and Tehran, and frequently visited each other. As the size of the Iranian diplomatic presence in Venezuela grew, Western security experts accused Venezuela of providing Iran with a Latin American base for illicit activities, including arms trading.

Venezuela’s final break with Israel came in 2009, during the three-week Israel-Hamas war in Gaza that began in late December 2008. Chavez severed diplomatic ties with the Jewish state, expelling the Israeli ambassador in Caracas and accusing Israel of committing genocide against the Palestinians. Chavez also insisted that the Jews of Venezuela rebuke Israel for its actions.

Chavez’s constant linkage of Venezuelan Jewry with Israel seemed to give presidential sanction to anti-Semitism, even if Chavez himself said he “respected and loved” Jews.

Anti-Semitic graffiti appeared in Caracas, equating the Jewish Star of David with the swastika. Broadcasters on state radio recommended the anti-Semitic forgery “The Protocols of the Elders of Zion” as an insightful read. Jewish institutions and houses of worship in Venezuela were attacked.

“People are being taught to hate,” then-Venezuelan Chief Rabbi Pynchas Brener told JTA in early 2009. “Venezuela has never seen anything like this before.”

But Chavez, a larger-than-life figure who dominated Venezuelan politics, was no Hitler. Venezuelan Jews were free to come and go as they pleased, and even many of those who emigrated returned frequently to visit — including Brener, who has since moved to Florida.

To some extent, Chavez watched over the country’s Jews. In 2009, the government gave round-the-clock police protection to the site of a Caracas synagogue that had been attacked.

But Venezuelan Jews also felt that Chavez was watching them — a suspicion vindicated by the publication early this year of documents showing that the SEBIN secret service was spying on Venezuelan Jews. The documents, which were obtained by the Argentinian media outlet Analises24, included intelligence reports, clandestinely recorded photos and videos.

For now, it’s unclear whether or for how long the anti-Jewish atmosphere Chavez allowed to take root in Venezuela will survive him.

But after 14 years of policies that prompted more than half of Venezuela’s Jews to pick up and leave — and with Venezuela’s economic and security problems now compounded by political turmoil — it’s hard to imagine very many of the Jewish emigres are hurrying back.