After Israel trip and apology to Turkey, Obama gains political capital. Will he spend it? 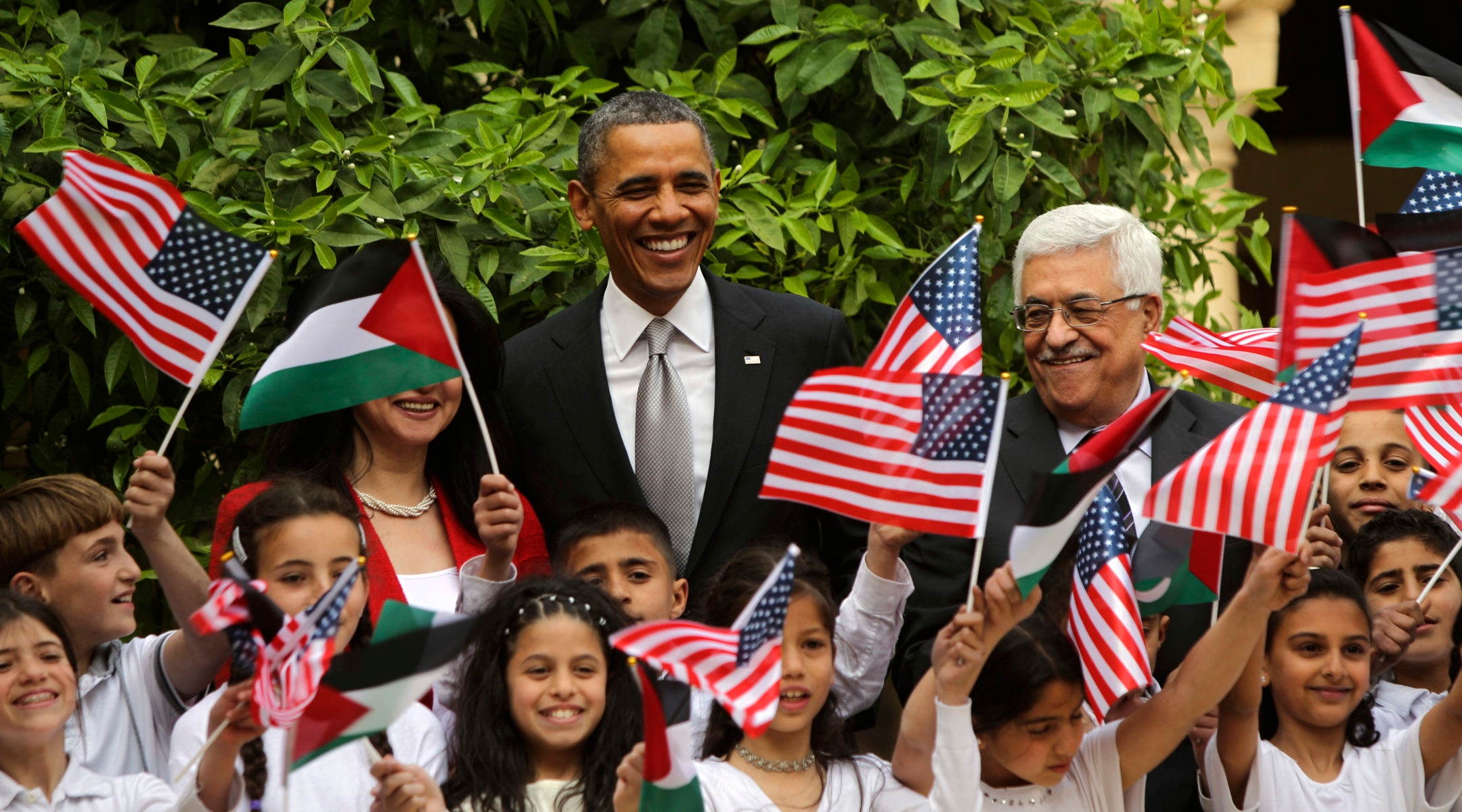 President Obama and Palestinian Authority President Mahmoud Abbas taking pictures with Palestinian children during a visit to the Church of the Nativity in Bethlehem, West Bank, March 22, 2013. (Atef Safadi/Getty)
Advertisement

President Obama placing a stone on the headstone of Yitzhak and Leah Rabin during a visit to Mount Herzl in Jerusalem, March 22, 2013. (Mark Neyman/GPO)

WASHINGTON (JTA) — For a trip that U.S. officials had cautioned was not about getting “deliverables,” President Obama’s apparent success during his Middle East trip at getting Israel and Turkey to reconcile has raised some hopes for a breakthrough on another front: Israeli-Palestinian negotiations.

The question now is whether Obama has the means or the will to push the Palestinians and Israelis back to the negotiating table.

U.S. Secretary of State John Kerry, who stayed behind to follow up with Israeli Prime Minister Benjamin Netanyahu’s team on what happens next, made clear in his statement on Israel’s apology to Turkey to place it in the broader context of the region’s tensions.

“As I discussed with Prime Minister Netanyahu this evening, this will help Israel meet the many challenges it faces in the region,” Kerry said in a statement issued Saturday evening.

After years of resisting, Netanyahu delivered the apology sought by Turkey since 2010 for the Israel commando raid on a Gaza-bound flotilla that killed nine people aboard a Turkish vessel.

There may have been a hint of what was to come in a remark delivered to reporters by Ben Rhodes, the U.S. deputy national security adviser, in a March 14 conference call before the trip.

“Israel as it makes peace is going to have recognize the broader role of public opinion in peacemaking,” Rhodes said, referring to the need to reach out to populations, not just leaders, in the region.

It was a theme Obama seized upon in his March 21 speech at the Jerusalem International Convention Center.

“Given the frustration in the international community about this conflict, Israel needs to reverse an undertow of isolation,” Obama said. Later in the speech, he added, “As more governments respond to popular will, the days when Israel could seek peace simply with a handful of autocratic leaders, those days are over.  Peace will have to be made among peoples, not just governments.”

The next afternoon, asked during a news conference with Jordanian King Abdullah how he brokered the Turkish-Israeli rapprochement, Obama made it clear it was about advancing shared interests in the region.

“I have long said that it is in both the interest of Israel and Turkey to restore normal relations between two countries that have historically had good ties,” Obama said. “It broke down several years ago as a consequence of the flotilla incident.

“For the last two years, I’ve spoken to both Prime Minister Netanyahu and Prime Minister Erdogan about why this rupture has to be mended, that they don’t have to agree on everything in order for them to come together around a whole range of common interests and common concerns.”

If there was much resistance in Israel to such an apology, it seemed to have dissipated in the wake of Obama’s charm offensive, which won over not only Israelis but even some American Jewish conservatives who have been among Obama’s fiercest critics.

“In terms of his attitude toward Israel, in the past three days Obama has altered his status in that regard from being the second coming of Jimmy Carter to that of another Bill Clinton,” wrote Jonathan Tobin, the senior online editor at Commentary magazine.

Emphasizing the Jewish connection to the land with visits to the grave of the founder of modern Zionism, Theodor Herzl, and a viewing of the Dead Sea Scrolls, Obama’s good will appears to have superseded any Israeli resentment for being pressured into the apology to Turkey. A snap poll by Channel 2 in the aftermath of Obama’s visit found that 39 percent of Israelis had changed their opinion of Obama for the better, the Times of Israel reported.

Whether Obama, like Clinton, will be able to leverage such good will into pressure on Netanyahu’s government — and whether he wants to — remains to be seen. Obama has made clear that he wants Netanyahu to give him time on Iran, telling Channel 2 in a pre-trip interview that he sees the dangers of a nuclear Iran arising in about a year’s time, not in several months, as Israeli officials reportedly believe.

Obama also made clear that he wants to see progress in the Palestinian-Israeli talks, but he did so in a passive way, not by offering solutions but by urging Israelis to pressure their government.

“I can promise you this, political leaders will never take risks if the people do not push them to take some risks,” Obama said in his March 21 speech. “You must create the change that you want to see.”

That’s not a clear plan, Robert Satloff, the director of the Washington Institute for Near East Policy, wrote in a post-trip analysis.

Nonetheless, should Obama proceed, Satloff suggested, he now has the political capital to do so.

“If the basic idea behind visiting Israel was to open the administration’s second term on surer footing in terms of U.S.-Israeli relations than what characterized the opening months of the president’s first term,” Satloff wrote, “he appears to have succeeded.”