Seeking Kin: Bringing Jacques Faitlovitch to the screen and relatives back in touch 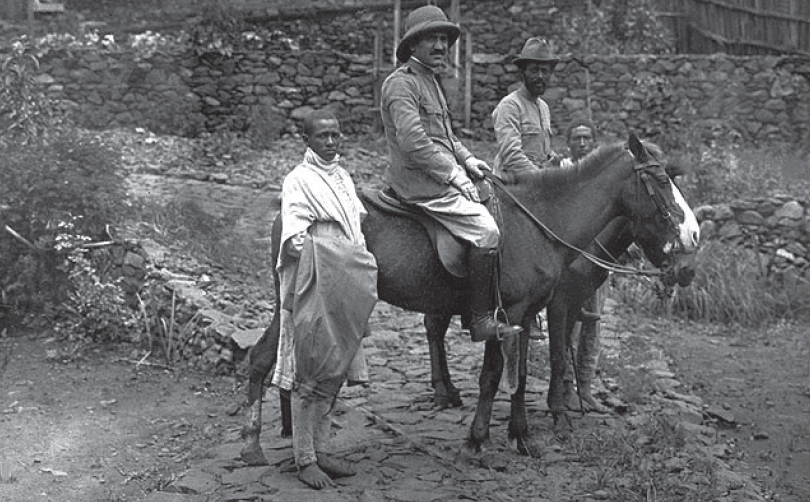 French-Jewish director Maurice Dores says his documentary may be the first cinematic treatment of Jacques Faitlovitch, above, who devoted his life to Ethiopian Jews. (Courtesy Maurice Dores)
Advertisement

BALTIMORE (JTA) – A “Seeking Kin” column in April 2012 excited Gal Adam Spinrad – and now the Cincinnati woman has cause to be happy anew.

Adam Spinrad has long been fascinated by the legend of her relative, Jacques Faitlovitch, who more than a century ago left his native Lodz, Poland, bound for Ethiopia. He devoted much of his life to the Jews living there, becoming one of the first European Jews to vouch for them as co-religionists and bring them into the fold.

As a UCLA student in 1992, Adam Spinrad wrote a research paper about Faitlovitch, and over the years she has plumbed her mother’s memory bank for information about him. So when last year’s “Seeking Kin” article related the story of a Haifa man’s efforts to honor Faitlovitch, Adam Spinrad contacted me. That’s how she learned the column had heard from another Faitlovitch relative.

That was Jonathan Faith, whose ancestors had settled in England and shortened their surname. Faith’s branch turned out to be the one that Adam Spinrad’s mother, who grew up in Lyon, France, remembered visiting in the early 1960s.

A documentary titled “Jacques Faitlovitch and the Lost Tribes” was screened recently at the Tel Aviv Cinemateque. The filmmaker, Maurice Dores, believes it is the first cinematic treatment of Faitlovitch, who died in Israel in 1955.

The documentary has its own family connection. Dores made the French-language film with his daughter, Sarah – he was the director, she was production director. Both live in France.

Dores said he made the film to shed light on Faitlovitch as “an important part of Jewish history and Ethiopian history,” and someone who considered Ethiopian Jews “like they were brothers.”

“We can say that Faitlovitch was the first European man who took out Africans from Africa not to make them slaves, but to make them ministers and professors,” said Dores, explaining that several Ethiopian Jews whom Faitlovitch sent for schooling in Europe would later serve under Emperor Haile Selassie.

Beyond that, Dores related by telephone from his apartment in central Tel Aviv hours before the film’s screening that the Faitlovitch documentary will provide important historical context for those whose knowledge of Ethiopian Jewry might be limited to the community’s celebrated exodus for Israel during Operation Moses in 1984 and Operation Solomon in 1991.

At a screening in Ashkelon, a woman raised in Ethiopia approached Dores to thank him.

“This is our history,” she told him.

It is Adam Spinrad’s history, too.

Previously unaware of the film, she expressed an eagerness to see it. Adam Spinrad said she would relay the news about its release to Faith and other relatives as far as Australia — some of whom she discovered after the initial “Seeking Kin” column appeared. They haven’t figured out precisely how they are related to Faitlovitch or each other, only that they are. Adam Spinrad, for example, said she thinks her maternal grandfather was a first cousin of Faith’s paternal grandfather.

“Everybody’s grown up knowing that Jacques Faitlovitch is a relative,” she said. “That’s how we know we’re related, even as we try to place each other on the [family] tree.” In that way, she said, Faitlovitch is “kind of a linchpin.”

Dores, too, was drawn to Faitlovitch. He said they share a similarity as ethnologists fascinated by Africa and its people. Before turning to filmmaking, Dores said, he was a physician and a psychiatrist who spent eight years living in Senegal and South Africa. He and his daughter had made an earlier documentary, “Black Israel,” about Jews in Africa, North America and the Caribbean.

“An ethnologist is not someone who explains to people ‘you are like this’ or ‘they are like that,’ ” Dores said. “An ethnologist gives another person an opportunity to speak, to be known in humanity. It’s a question of respecting other people. And I think that Faitlovitch had respect for people who were without respect. This is a lesson of humanity.”

(Please email Hillel Kuttler if you would like “Seeking Kin” to write about your search for long-lost relatives and friends; include the principal facts and your contact information in a brief email. “Seeking Kin” is sponsored by Bryna Shuchat and Joshua Landes and family in loving memory of their mother and grandmother, Miriam Shuchat, a lifelong uniter of the Jewish people.)