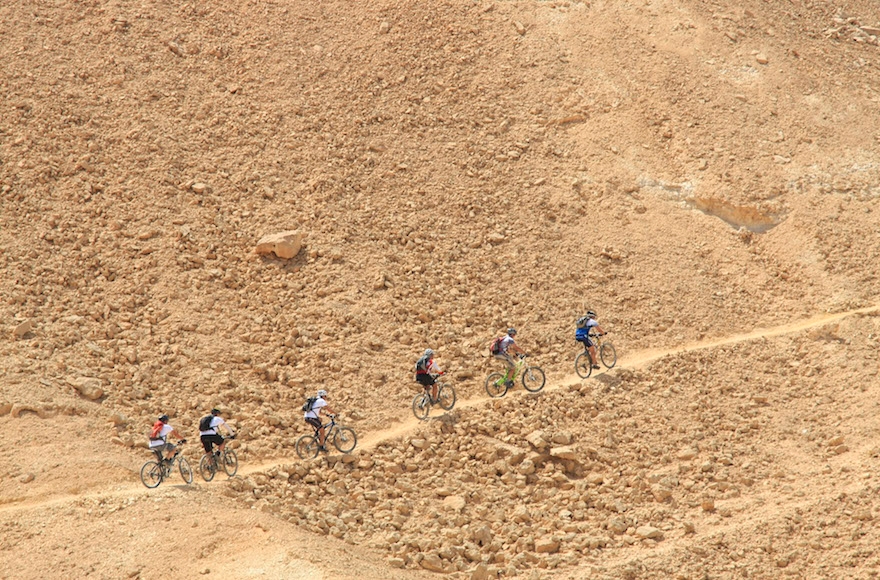 TEL AVIV (JTA) — Sprawling across a land area comprising more than half of Israel, the Negev Desert has long been seen as a vital national resource.

David Ben-Gurion, Israel’s first prime minister, famously wanted to make the desert bloom. Subsequent governments sought to enhance the region’s appeal to tourists and develop its military potential. A massive complex of army bases is slated to open near Beersheva in the coming years, while near the southern city of Eilat, entrepreneurs have built vast solar power fields.

But one Negev businesswoman has a different economic plan for the desert: Fill it with bike paths.

Aviva Schreiber is the co-founder of iBike, a boutique hotel geared toward cyclists and hikers near the Negev’s massive Ramon Crater. The desert climate, she says, is ideal for bicycle tourism — especially in winter, when the Negev’s dry heat is a welcome change from the rain and snow that covers Europe.

“People from Berlin cry” when they cycle in the Negev, Schreiber said. “They couldn’t ride a meter in the winter. They get here and they’re crazy about the fact that they can ride.” 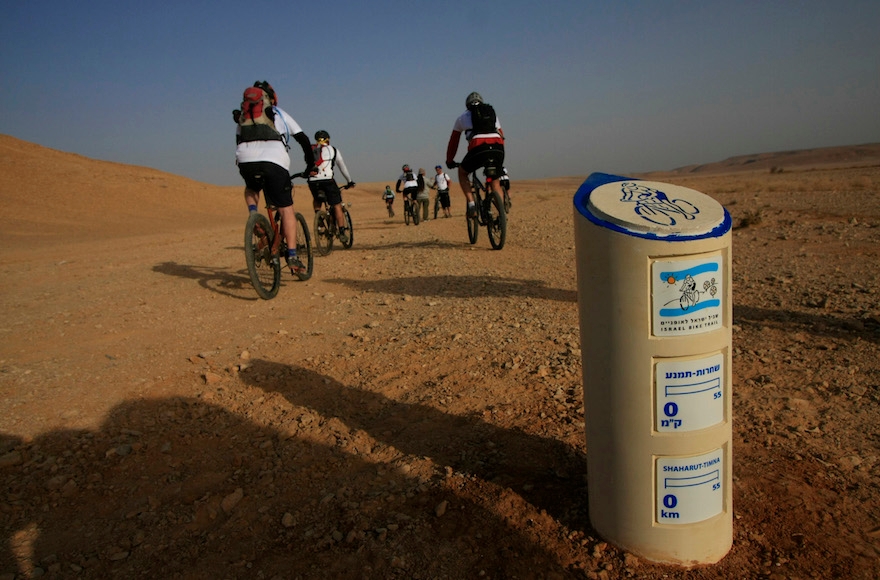 Across the United States and Europe, authorities eager to promote the environmental and health benefits of cycling have created municipal bike share programs and paved countless miles of bike lanes. In Israel, bike paths are being blazed across the Negev and Galilee, providing not only recreation opportunities to locals, but a powerful draw for foreign cycling enthusiasts.

Later this month, President Shimon Peres will inaugurate a 25-mile bicycle path starting at a sculpture park near the Ramon Crater. The government is also working on a trail that takes riders through Christian sites near the Sea of Galilee and another that cuts diagonally across Jerusalem. The Binyamin Regional Council, which governs Israeli settlements in the central West Bank, is about to open a bike path showcasing the area’s natural and archeological attractions.

Hillel Sussman, director of the Israel Bicycle Trail, says that within five years the government hopes to complete a contiguous bicycle trail parallel to the Israel Trail, the nearly 700-mile hiking path that runs from Eilat up north to Mount Hermon, at the tip of the Golan Heights.

“People can get to know nature, the land,” Sussman said. “If we can do it through bicycles, and that’s how people want to get to know it, that’s better than motorcycles or jeeps. It helps the environment.”

Though Israel has developed official bike trails, enthusiasts say that plenty of navigable routes have long crisscrossed the country. And with snow on Mount Hermon, a desert in the south and green hills in between, Israel provides a range of landscapes to lure bicycle tourists. There are 150 miles of bike paths in Israel’s Negev forests alone, according to the KKL-Jewish National Fund.

The problem, bike advocates say, is that most people don’t about it.

When guests come to iBike, the staff shows them a range of trails for biking, hiking or driving jeeps. The hotel rents out bicycles and a range of accessories and offers guides and bike parking spaces. In recent weeks, Schreiber said, guests have arrived from Canada, Switzerland, France and Australia.

Still, Schreiber wishes the government would do more to promote Israeli cycling abroad.

Bike paths in Israel’s cities also need more attention, said Yotam Avizohar, director of Yisrael Bishvil Ofanayim, an organization whose name means both “Israel for Bicycles” and “Israel on a Bicycle Trail.” He noted that developing trails in old cities like Jerusalem poses challenges because it means expanding roads and, in some cases, eliminating parking spots.

One exception is Tel Aviv, which boasts 60 miles of bicycle paths. Flat, compact and only about a century old, Tel Aviv has opened paths along its coastline and on major avenues. The city also offers Tel-O-Fun, a bicycle-sharing program that had 30,000 foreign users in 2012. The program will have a total of 180 stations by the end of the year and there are plans to expand to adjacent suburbs.

“You look at the city and don’t understand how we existed without it,” said Ido Shamir, CEO of Tel Aviv’s Economic Development Authority.

But even as local and national government agencies invest more in trails, Avizohar said that Israel’s best resource for expanding bicycle tourism are amateur Israeli cycling enthusiasts who aid visitors in finding and navigating trails. Government officials, he said, are beginning to understand how cyclists can help them.

“We’ve found solutions, but there isn’t enough information,” he said. “They look at bikers not as troublemakers, but as people who can provide insight.”