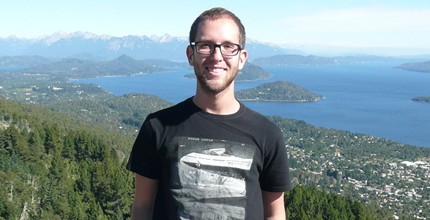 Tal Blumstein wooed women with a fake story about his Israeli army service, then found success with the truth about his musicianship. (Courtesy Tal Blumstein)
Advertisement

“You’re dismissed from your IDF mandatory army service by law,” he said and called the next soldier-to-be.

I was frightened by the diagnosis. I had worn glasses since I was 3, but I never thought I would lose my vision at 18.

It turned out not to be as serious as it sounded: My eyes just didn’t get used to darkness as quickly as they should.

It took me time to digest the enormity of the news: I didn’t need to serve in the army.

As a slim, 5-foot-8 musician, I never wanted to follow in the footsteps of my father, who served in the artillery force and fought in the first Lebanon War in 1982, so I was relieved to be released from combat. But I still wanted to serve my country. Army service was always an inseparable part of being Israeli. I grew up knowing this was something all good citizens should and want to do. And I did.

Having played the piano from age 6, I auditioned with hundreds of others for two spots as pianist in the IDF Orchestra. I was accepted.

The 60-member orchestra represents the Israel Defense Forces for important ceremonies and events, including welcoming foreign presidents and politicians. I performed for dignitaries, heads of state, played with famous artists and even traveled the world three times to raise money for the army.

Performing for hundreds of people in a foreign country made me proud to be Israeli. People paid to see us, and we made them feel more connected to my country.

Unfortunately, none of this helped me find a girlfriend – or even a date.

One night at a bar in Tel Aviv, I spotted a pretty brunette. She seemed a little older than me, in her early 20s.

“Are you in the army?” she replied without answering my question.

“I’m a pianist in the IDF Orchestra,” I said proudly.

Silence. Her face showed nothing. I couldn’t read what was going on in her mind.

“Oh, sorry, I have to go meet my friends,” she said, and left me there, standing by the bar stool, surprised, trying to figure out why she left so fast. After all, I said only two sentences.

Did I look bad? Was I not confident enough? Maybe it was something I said?

After the scenario was repeated at parties and bars in Eilat, Jerusalem and Raanana, I came to realize that my prestigious job in the army wasn’t so prestigious with local females. It seemed they were more excited by military men than music men.

I never understood why women were so attracted to combat soldiers with guns. I guessed it made the soldiers manlier, tougher. But was I less a man because I didn’t fight? Why did being an army musician make me less attractive?

Some nights I wondered what I could have achieved with the fairer sex if I only carried a weapon. I felt left out, and it was frustrating.

After my service, I decided to continue my music career in the United States. I was 22 when I moved into an apartment in Jersey City, N.J.

One night at the bar around the block from my apartment, I flirted with a cute American Jew named Danielle. I told her I’d been a soldier in the Israeli army. Since being a soldier was more unusual in the U.S. than in Israel, where everyone must serve in the army right after high school, I had hoped the young Jewish women here would appreciate my military service more than Israelis.

“Have you ever shot a weapon?” she asked.

“Yes, but only in training,” I said. I could see the answer ruined my shot at dating her. I’d moved countries, but was my fate with women going to be the same?

One day on a ski trip to Austria with three other jobniks – the Hebrew term for army geeks, or soldiers who didn’t fight – we decided we had to come up with a new story for our military service. We went to a local bar and the act began:

“Hey there. What’s up? Is this seat taken?” I asked a pretty blonde French tourist.

“No, go ahead,” she replied in a heavy accent.

A few minutes later came the million-dollar question: “So what do you do?”

This time I had a good answer: “I’m a combat soldier in the Israel Defense Forces.”

She liked my story and, finally, success. But I felt weird. It was the first lie I had told about my army years. My friends always said that I was too nice and that I care too much. Maybe they were right.

On the ski trip, I tried the story a few more times — and felt guiltier for every woman that believed it. When the week was over, I realized I didn’t want to lie anymore. I wanted to be myself.

Although the lies got me a few great nights with beautiful women, I wanted to find a real girlfriend – and I couldn’t with a lie.

Just a few weeks ago in New York’s Greenwich Village, I introduced myself to  a beautiful, tall, blue-eyed woman sitting at a bar.

“What are you doing in the city?” she asked. “You don’t sound like you’re from here,” she added before taking a sip of her apple martini.

“I just finished my service in the army orchestra in Israel.” She took another sip. “I’m a jazz pianist now,” I added.

“Wow, that sounds amazing,” she answered enthusiastically. We ended up talking for hours and she gave me her phone number.

Turns out in artsy downtown Manhattan, I had the big guns after all.