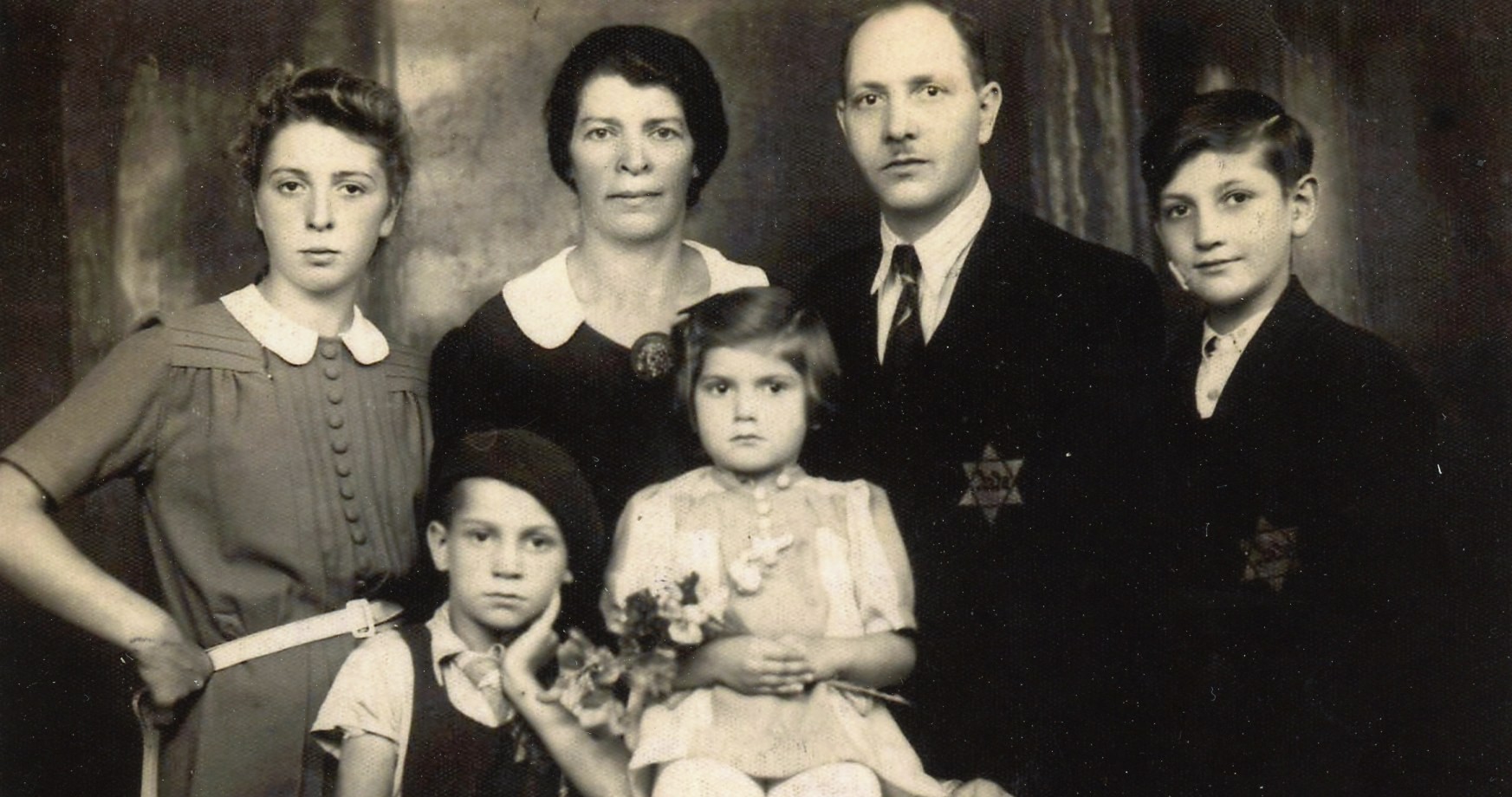 Rose Goteiner, left, is shown with some family members during their incarceration in Poland’s Dubrowa ghetto: parents Haskel and Sheindel, brothers Alfred, next to Goteiner, and Herman, right, and sister Ruth. (Courtesy Rose Goteiner)
Advertisement 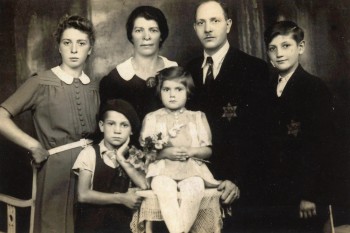 Rose Goteiner, left, is shown with some family members during their incarceration in Poland’s Dubrowa ghetto: parents Heskel and Sheindel, brothers Alfred, next to Goteiner, and Herman, right, and sister Ruth. (Courtesy Rose Goteiner)

BALTIMORE (JTA) – Picking up her mail about a year ago, 88-year-old Rose Goteiner stopped in her tracks upon seeing the photo on a newsletter cover.

In the middle of the front row was a girl wearing a light-colored dress, hands at her sides and staring into the camera.

Goteiner believes it is her sister, Ruth Konigstein. And now Goteiner is hoping against hope that Ruth is still alive and that the sisters might miraculously reunite in their twilight years.

“I thought I was going to die when I saw it,” Goteiner, of Boca Raton, Fla., said of the picture. “Right away I knew it was her. My whole body was shaking. Right now, I’m shaking.”

Goteiner last saw Ruth, as well as two brothers, Herman and Alfred, and her parents, Heskel and Sheindel, in the Dubrowa ghetto in Poland in 1943. Ruth was 4 or 5 at the time; Rose was 17 or 18.

That year, the Nazis deported Goteiner, first to the Gelenau labor camp in Germany, then on a three-day march to Reichenbach, a sub-camp of the Gross-Rosen concentration camp.

The fate of the others? Even now Goteiner doesn’t know. Shortly after being liberated, Goteiner heard from another survivor that they may have been deported to Auschwitz and, presumably, their deaths. (Three siblings who presumably were killed survived the war, and two of them are still alive.)

“I remember everyone’s face,” she said, no doubt aided by the treasured family photograph she has kept since the war. It sits in a frame atop her bedroom dresser, a formal portrait made of herself with her parents and siblings during their imprisonment at Dubrowa. Heskel and Herman, then about 13, are wearing the compulsory yellow Jewish star on their suit jackets. Rigid, harsh expressions characterize everyone’s face – all except Herman’s. His lips indicate a slight smile.

Herman also displays a bandage on his right cheek, where he was shot by German soldiers. The soldiers had stormed the family’s ghetto apartment after being tipped off that the Konigsteins were allowing butchered meat to be packaged in their kitchen and sold on the black market. Fearing their execution, the parents escaped out a window while Herman held off the intruders by pushing against the door – until being shot. Heskel and Sheindel hid for several weeks and eventually returned. 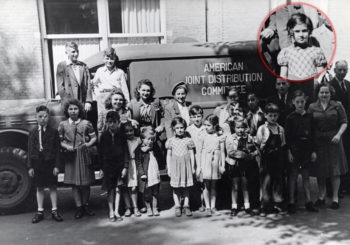 Rose Goteiner believes that her sister, Ruth Konigstein, is shown in the middle of the bottom row of this 1946 photograph taken in Amsterdam. (Courtesy American Jewish Joint Distribution Committee Global Archives)

In both photographs, Ruth’s square countenance features ear-length hair parted above the left eye. The resemblance between the two might be so uncanny as to prove that Ruth survived the Holocaust, was assisted by the JDC – and may be found today, when she’d be about 75. Or perhaps Goteiner’s memory and yearning for good news after losing so much are playing tricks on her.

There’s no way to know which is correct — at least not yet. The JDC’s director of global archives, Linda Levi, said the organization’s records and ship manifests did not turn up the name Ruth Konigstein (or an alternative spelling, Konistein).

The name might have appeared in manifests of one ship in particular because the JDC’s caption states that the photograph shows “16 children who departed for the U.S. after their visas and immigration papers were arranged by the local offices of the JDC. These children went to America on the S.S. Marine Flasher.”

Another possibility is that the girl in the group picture is indeed Ruth, with her given name not appearing in records because it had been changed or was forgotten amid the Holocaust’s trauma.

The Marine Flasher made several journeys between Europe and the United States during that period, Levi said, often bringing Jewish orphans to America.

Levi said several people in the photograph have been identified by visitors to the JDC website and others who telephoned. One woman, Galia Kempis, of Brooklyn, N.Y., called to say that she is the girl in the front who’s holding a doll and that her brother, who lives in Canada, is the boy to her left wearing overalls.

The picture was one of 1,500 released by the JDC in its two-year campaign documenting its relief efforts during and after World War II. The JDC invites visitors to the project’s website to identify those pictured and relate some of the context.

If Ruth survived the Holocaust, it would reverse her loved ones’ assumptions. In separate documents filed with Yad Vashem in the 1980s and 1990s, Goteiner, her sister Eda Lehman and her brother Joseph Aris stated that Ruth had been killed in the Holocaust.

In 1992, an uncle, David Arthur Zyto, who resided in Stockholm, also filed a document with the Holocaust-commemoration institution. In it, he wrote that Ruth (whose date of birth was given as March 28, 1938) had been “murdered, probably together with her parents at Auschwitz.” While the documents, known as “pages of testimony,” enable people to memorialize their loved ones, they do not demand proof of their death.

William Connelly, a technical information specialist at Washington’s U.S. Holocaust Memorial Museum, said that Ruth’s name isn’t mentioned in any records of the International Tracing Service. The ITS documented the names of many survivors shortly after the Holocaust.

Should Ruth Konigstein ultimately be found through this article, she and her siblings will have their niece, Gloria Jaffe, to thank. Jaffe, of Cleveland, discovered “Seeking Kin” when she typed the words “long-lost relatives” into a search engine. She then contacted “Seeking Kin” to ask for assistance.

Goteiner and her late husband, Henry, raised two daughters, who produced three grandsons. And after the Holocaust, good luck delivered Goteiner the three siblings she had presumed gone.

Her elder brother, Joseph, had survived the war in Russia, settled in Israel and lived the rest of his life in the United States before he died.

Older sisters Eda and Lena survived a number of camps; some together and some apart. Lena, now 90, lives in Cleveland, and Eda, 92, is in Arizona. Eda cries every time she looks at the JDC photo, Goteiner said.

Goteiner sheds her tears, too, including while being interviewed for this article. The portrait on her dresser is her only photograph of Ruth, Alfred and Herman. But Goteiner is hoping she’ll gain many more pictures when she sees her long-lost sister again.

“I hope she’s alive. Maybe she was adopted by somebody” after reaching America, Goteiner said of Ruth. “That’s her, 100 percent. I can swear by it. … I’d hug her, kiss her and cry, mostly just to know she’s alive.”

(Please email Hillel Kuttler at seekingkin@jta.org if you know the whereabouts of Ruth Konigstein. If you would like “Seeking Kin” to write about your search for long-lost relatives and friends, please include the principal facts and your contact information in a brief email. “Seeking Kin” is sponsored by Bryna Shuchat and Joshua Landes and family in loving memory of their mother and grandmother, Miriam Shuchat, a lifelong uniter of the Jewish people.)