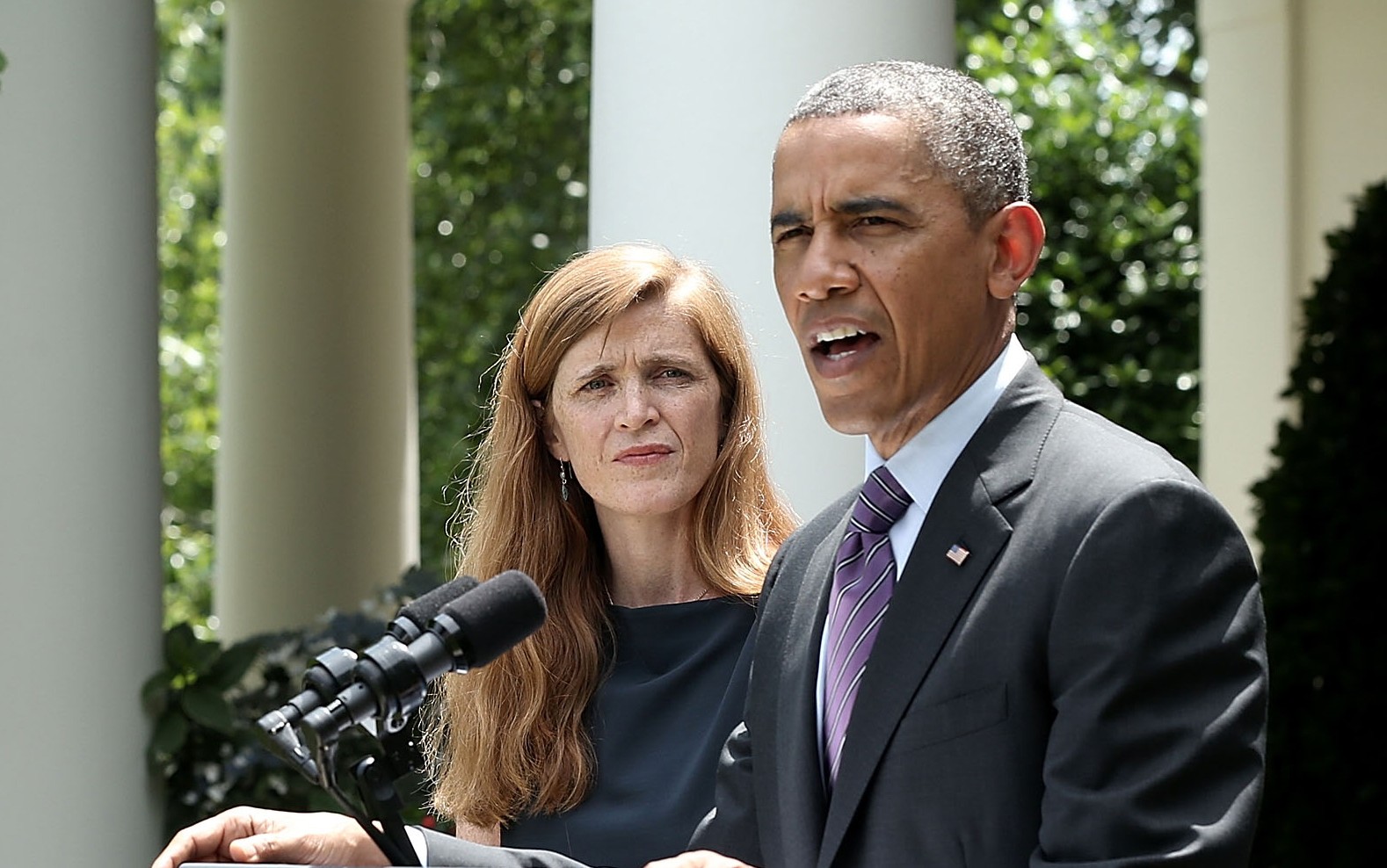 Samantha Power, recently nominated as U.S. ambassador to the United Nations, listens to President Obama as he announces the nomination of Susan Rice to be the next National Security Adviser at the White House, June 5, 2013. (Alex Wong/Getty)
Advertisement 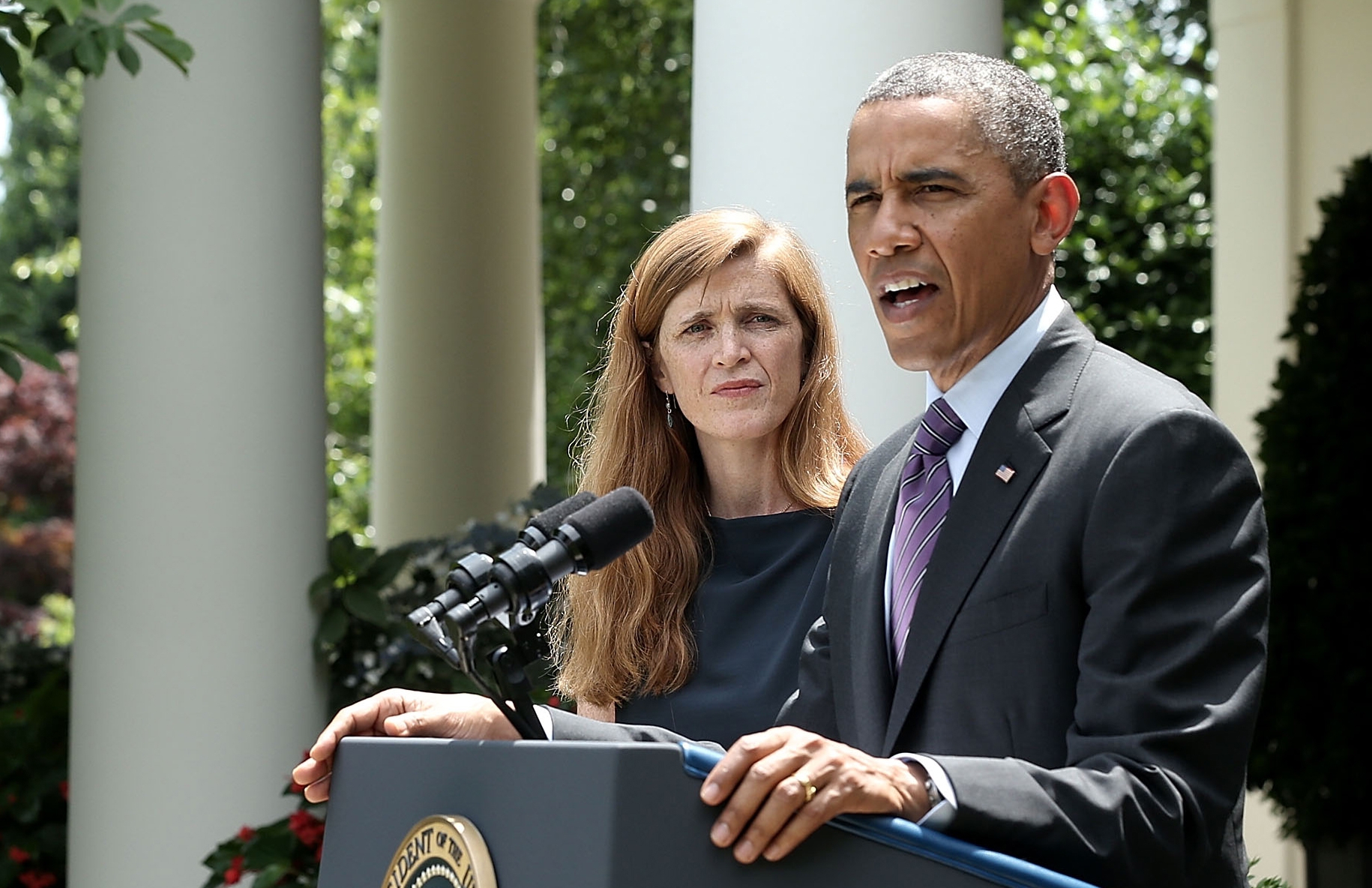 Samantha Power, the nominee for U.S. ambassador to the United Nations, listens as President Obama announces at the White House his nomination of Susan Rice to be the next national security adviser, June 5, 2013. (Alex Wong/Getty)

WASHINGTON (JTA) — Samantha Power brings to foreign policy an activist impulse that many in the pro-Israel community wish was more prevalent among American diplomats.

Except Power, a former White House National Security Council staffer nominated this week by President Obama to represent the United States at the United Nations, also has directed her interventionist inclinations at Israel.

A former journalist and Harvard-educated lawyer known for her work on human rights and genocide, Power presents a rare and polarizing dilemma for the pro-Israel community: Embrace her proclivity for tough U.S. intervention and hope it never manifests in her dealings with Israel, or block her nomination.

Two conservative Jewish groups, the Zionist Organization of America and Emet, have taken the latter approach. In urging the Senate to kill Power’s nomination, they have cited a 2002 video in which Power appears to advocate transferring U.S. assistance from Israel to the Palestinians and deploying an intervention force to protect the Palestinians, among other statements.

“The overwhelming evidence of her entire record causes us great fear and concern,” the ZOA said in a statement.

Meanwhile, an array of Jewish groups — including the Anti-Defamation League, the Jewish Council for Public Affairs and the Conservative movement’s Rabbinical Assembly — have endorsed Power unreservedly.

The ADL and the Rabbinical Assembly in separate releases each used the phrase “champion of human rights” to describe Power, who first came to wide public attention with the publication of her 2002 book, “A Problem from Hell: America and the Age of Genocide,” which considered American inaction in the face of various genocides.

Notably, two groups that maintain a regular U.N. presence, the American Jewish Committee and B’nai B’rith International, had no comment. B’nai B’rith said it was withholding approval of Power’s nomination until she addressed her earlier remarks under oath during Senate confirmation hearings.

“Israel has few real friends at the United Nations and at the top of the list is the United States, and it is really incumbent on the representative to be prepared, willing and able to rebuff and repel that kind of language,” said the group’s executive vice president, Daniel Mariaschin.

A similar dichotomy is playing out among Republican senators, with Sen. John McCain (R-Ariz.), a leading critic of what he sees as Obama’s gun-shy foreign policy, saying he would support her, and Sen. Ted Cruz (R-Texas), a Tea Party favorite, expressing deep skepticism at the choice.

“As United Nations Ambassador, Samantha Power will aggressively represent the United States interests in an increasingly hostile body,” he tweeted, and then, “Power will also be a strong supporter of our close friend and ally Israel.”

The difference was pronounced this week even among Republican Jews, with the Republican Jewish Coalition urging senators to ask Power hard questions about past statements and Rabbi Shmuley Boteach, whose failed candidacy last year for the U.S. House of Representatives was touted by the RJC, singing her praises.

“I take my yarmulke off to President Obama for one of the most impressive actions of his presidency, namely, the nomination of Samantha Power to the post of American Ambassador to the United Nations,” Boteach wrote in the Huffington Post.

Power, 42, was born in Ireland, but moved to Pittsburgh as a child. Her coverage of the Balkan wars for a number of American media outlets in the 1990s led to an interest in human rights law.

Her 2002 book drew strong reviews and attracted the attention of Barack Obama, who then was contemplating a Senate run. Power joined his 2008 presidential campaign as an adviser and later the Obama White House, where she worked on multilateral organizations.

Central to critiques of Power is a 2002 chat she had with a University of California, Berkeley professor, Harry Kreisler, when she was heading Harvard University’s Carr Center for Human Rights.

Kreisler, hosting Power on his public access program, framed a question about U.S. intervention in the Israeli-Palestinian conflict as a “thought experiment” and asked Power what she would do if “one party or another” seemed ready to commit genocide. At the time, Israelis and Palestinians were mired in the second intifada.

“It seems to me at this stage, and this is true of actual genocides as well and not just major human rights abuses which we’re seeing there, you have to go in as if you’re serious, you have to put something on the line,” she said. That meant taking the billions of dollars “serving Israel’s military” and investing it instead in the state of Palestine and a “mammoth protection force.”

Power also noted that taking such a step “might mean alienating a domestic constituency of tremendous political and financial import.”

The comments aroused widespread concern in the pro-Israel community when they surfaced during the 2008 presidential campaign, including among some who are now championing her nomination.

Power and her defenders have played down the significance of those comments, emphasizing that Kreisler had asked the question purely hypothetically. Kreisler’s query also could be construed to have been referring to threats against both Israelis and Palestinians, but Power chose to address only what the United States should do to protect the Palestinians.

“The cardinal sin when you’re on video: Don’t answer hypotheticals,” said a former Obama administration official who worked closely with Power and asked not to be named. “She answered an academic question.”

The Power nomination is hardly the first time a nominee has divided the pro-Israel community. But in the past — including most recently the nomination of Chuck Hagel as defense secretary — the community’s positions  have ranged generally from outright opposition on the right to silence or discomfited acquiescence in the center.

Josh Block, who directs the Israel Project and was sharply critical of the Hagel pick and other administration policies, praised Power, and described her views as evolving since the video.

“Over the past few years, Samantha has made a commendable effort to build ties with the pro-Israel community and develop deeper appreciation of the issues vital to our interests in the region, Israel’s security and the U.S.-Israel relationship,” Block said in an email.

“Some may not be aware that in her role at the NSC, she also helped lead the administration’s efforts opposing the Palestinian bid to circumvent peace negotiations with Israel with unilateralism at the U.N.”

Boteach in his Huffington Post column said he convened a meeting in 2011 between Power and Jewish leaders to clear the air after the 2002 video led to accusations that Power was anti-Israel.

“In the presence of the leaders of our community, she suddenly became deeply emotional and struggled to complete her presentation as she expressed how deeply such accusations had affected her,” Boteach said.

B’nai B’rith’s Mariaschin attended the meeting and said she delivered an “important” statement. However, he said his group was withholding approval of the nomination until Power addressed her earlier remarks under oath and publicly in the Senate confirmation hearings.

Jarrod Bernstein, the White House’s former Jewish liaison, noted Power’s key role in working with Susan Rice to head off anti-Israel initiatives at the United Nations. Power would succeed Rice at the U.N.; Obama tapped Rice this week to be his new national security adviser.

“Someone once told me in the White House, we are in the pay-for-performance business,” Bernstein said. “And Samantha Power performs vis-a-vis the pro-Israel community.”