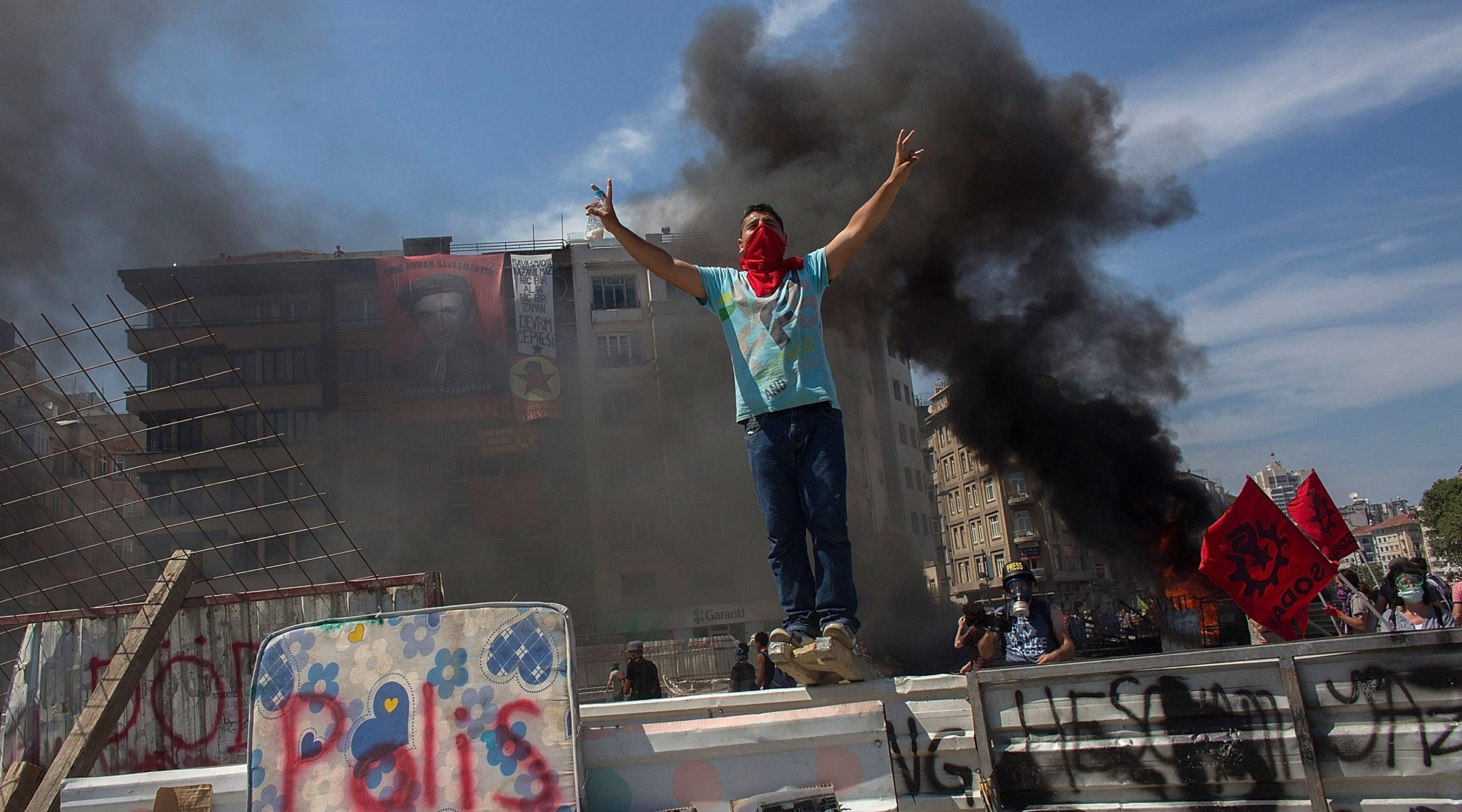 Protester standing on top of a barricade during a demonstration near Taksim Square in Istanbul, Turkey, June 11, 2013. (Lam Yik Fei/Getty)
Advertisement 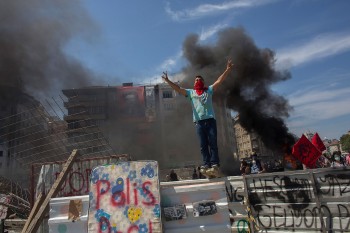 Protester standing on top of a barricade during a demonstration near Taksim Square in Istanbul, Turkey, June 11, 2013. (Lam Yik Fei/Getty)

TEL AVIV (JTA) – As the budding protest movement in Turkey against Prime Minister Recep Tayyip Erdogan struggles to gain a foothold, Israel is watching the developments with some measure of ambivalence.

On the one hand, Erdogan has led Turkey away from a close alliance with Israel, using his perch to castigate Israel for its treatment of the Palestinians and curtailing once-cozy military ties with the Israel Defense Forces. A popular uprising that leaves Erdogan politically wounded could be welcome news for Israel.

On the other hand, Turkey has been one of the few redoubts of stability in an increasingly volatile Middle East and among the few governments able to broker relationships between Israel and its Arab adversaries. Turkey and Israel also have been engaged in reconciliation talks over the past three months.

With other states in the region enmeshed in civil war, messy political transitions or other forms of political turmoil, adding Turkey to the list of volatile states would mean even more uncertainty for Israel.

“We say this is great, he berated us, but we don’t know who will come after him,” Efrat Aviv, an expert on Turkish politics at Bar-Ilan University’s Begin-Sadat Center for Strategic Studies, said of Erdogan. “We know his strengths and weaknesses. We know how to deal with him. It would be hard if someone new came in who we didn’t know.”

Protests in Istanbul’s Taksim Square, which began on May 28, initially opposed a city construction

plan slated to replace a park. But since then the protests have spread throughout the country and morphed into a broader condemnation of Erdogan, who has led Turkey for 10 years and plans to run for president next year.

Erdogan, the head of the conservative Muslim AKP party, has ordered authorities to crack down on the protesters. This week, police arrested hundreds of journalists, medics who were treating protesters and even local shop owners who have aided the demonstrations.

Though these protests may weaken Erdogan within Turkey, they’re unlikely to affect Israeli-Turkish negotiations because Erdogan is unlikely to lose his grip on power, according to Alon Liel, a former Israeli ambassador to Turkey.

“They can’t get rid of him,” Liel said. “I don’t think there will be any implications. He’s the same person at the head of the same party.”

But Aviv says a loss of domestic power could prompt Erdogan to improve foreign relations and “make him get closer to Israel.”

Turkey and Israel had a strong alliance a decade ago, but their ties began to deteriorate not long after Erdogan came to power. The nadir came in 2010, when Israeli naval commandos stopped a pro-Palestinian flotilla intent on breaking Israel’s maritime blockade of Hamas-controlled Gaza. A violent confrontation aboard one of the boats, the Mavi Marmara, left nine Turkish nationals dead, incensing Erdogan.

Turkey recalled its ambassador from Israel and subsequently downgraded diplomatic ties with Jerusalem.

During his visit to Israel in March, President Obama orchestrated a phone call in which Israeli Prime Minister Benjamin Netanyahu formally apologized to Erdogan for the Mavi Marmara incident, sparking reconciliation talks between Israel and Turkey that are ongoing.

One regional leader who may benefit from the turmoil in Turkey is embattled Syrian President Bashar Assad, according to Liel.

Erdogan’s government has been aiding Syrian rebels and has taken in hundreds of thousands of Syrian refugees, so a blow to Erdogan could be good news for the Syria-Iran-Hezbollah axis – and bad news for Israel.

Gallia Lindenstrauss, a research fellow at Tel Aviv University’s Institute for National Security Studies, says that while the protests may weaken Erdogan’s government, they demonstrate that Turkey is a still a democracy — a good thing in a region filled mostly with autocracies.