Seeking Kin: In Israel, a happy reunion tinged with sadness 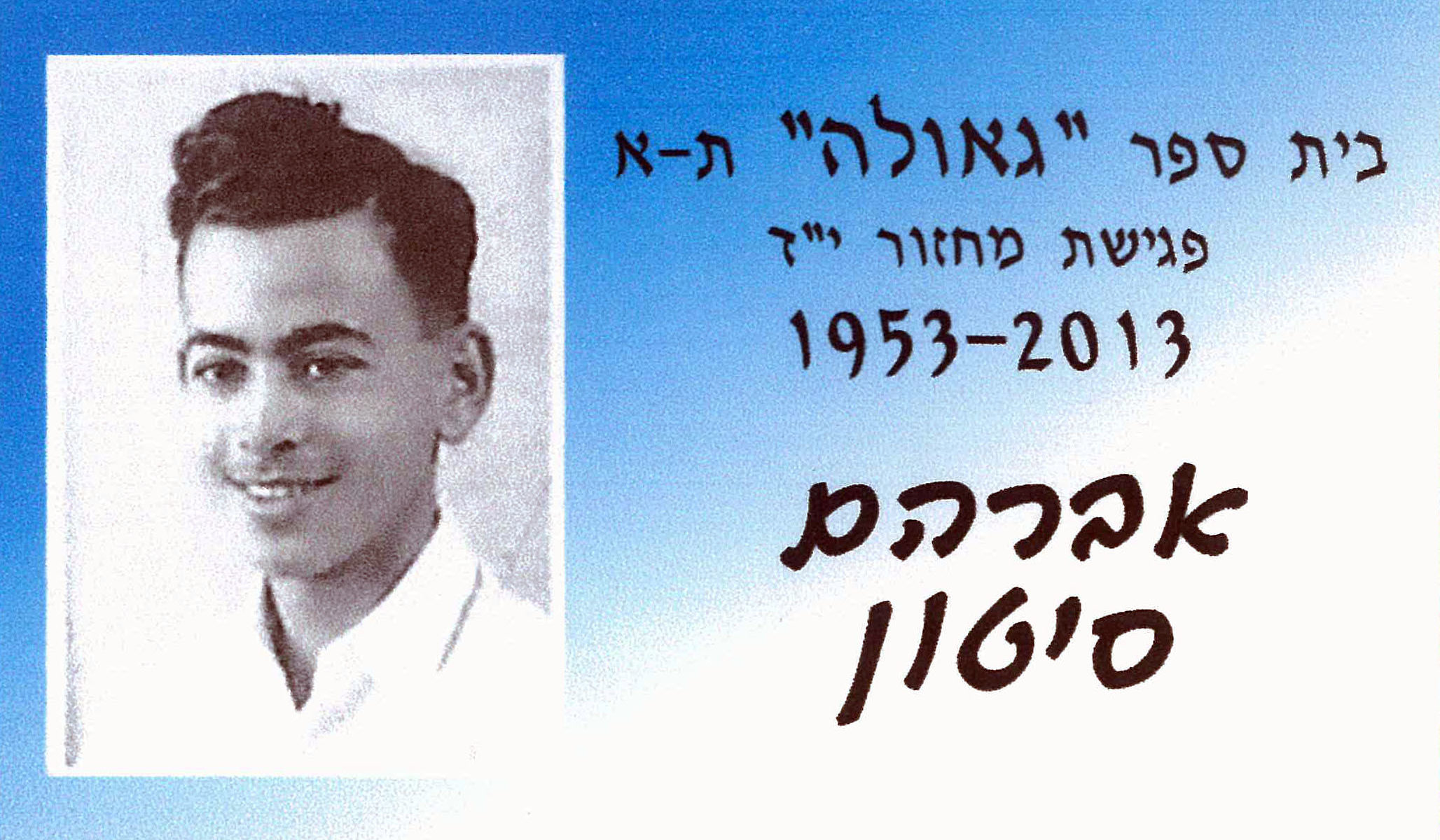 The slide made for Avraham Siton at his elementary school's 60-year reunion. (Courtesy Ora Bogomolny)
Advertisement

BALTIMORE (JTA) – Ora Bogomolny sounded subdued, as if the phone call to her Israel apartment had disturbed her sleep.

Indeed, she had experienced a nightmare just hours before receiving the call from “Seeking Kin” on June 13.

Bogomolny had learned that Avraham Siton suffered a fatal heart attack in a Manhattan hotel room mere hours before his scheduled flight for Israel to attend a reunion of their Tel Aviv elementary school class — an event spearheaded by Bogomolny.

The previous night’s get-together of the class of 1953 had gone beautifully. But Siton’s death “destroyed all the good feeling we had” from the event, said Bogomolny, who described herself as being “in shock.”

She had decided last year to organize the reunion – an endeavor about which “Seeking Kin” wrote in November. Eventually she found Siton living in New Jersey, and the two would have regular contact. Bogomolny, of Toronto, even met Siton and another Geulah Elementary School classmate, Mashiach Moshe Shem-Tov, for lunch twice last winter while visiting Florida. The two men had homes in the North Miami Beach area, but hadn’t known about the other until Bogomolny reunited them.

In calls and emails, Siton told her how much he was looking forward to the June 12 reunion. Two days before Bogomolny left her home for Israel, Siton sent one last email.

Twenty-nine children comprised the class of ’53 at Geulah, which was located in downtown Tel Aviv. The school no longer exists, but the building does — it wasn’t far from the reunion festivities at the Tal Hotel. Two classmates, Dov Becker and Rachel Gutfeld Younish, handled most of the reunion’s logistical planning, and Bogomolny labored at finding everyone – and she did just that. Some, like her, lived outside Israel. Six had died. Others were too ill to attend.

All told, 17 of the Geulah students came, six with spouses. Becker, who lives near Netanya, brought his daughter, Noa, a photographer.

At the reunion, attendees wore pins with their photos from the Geulah days. They oohed and aahed with each contemporary face recognized. Noa Becker’s camera captured the hugs and embraces.

After an hour they moved upstairs for a sumptuous buffet. Bogomolny (nee Perry) formally welcomed the class and related her search for each individual. Ziva Yanovsky Wexler spoke about the teachers as a slide show presented their visages. Younish waxed eloquent on friendships formed then and renewed only recently. Younish’s son, Guy, played a CD of period melodies, and the classmates sang along.

It was “a magical atmosphere,” Becker said.

But he and Bogomolny grew concerned by Siton’s absence. They glanced at the door constantly, awaiting his entrance. Others did, too. Siton, Bogomolny said, “was the star of the class: handsome, successful. He’d left for the U.S. at age 17. After I found him, everyone was looking forward to seeing him [at the reunion].”

Once found, Avraham Siton was thrilled to reconnect. “He was so excited to come to the reunion, excited to meet everyone,” Bogomolny said. “We spoke and exchanged emails all the time. I’d get a response five minutes later from his iPhone.”

Siton, 74, had enjoyed a successful career, partnering with Buddy and another older brother, Mike, in several clothing and linen businesses in the New York area, among them Sutton Stores. He and his wife, Paula, had three children, who produced seven grandchildren.

In an interview, Buddy Sutton said Avraham was “very good-hearted,” serving on the board of Brooklyn’s Maimonides Medical Center and building a synagogue there in memory of their parents, Hillel and Bahira. The brothers owned Florida winter homes near each other. They played golf together, and Avraham made a point of including a cousin with poor eyesight.

“We were very attached,” Buddy said, and Avraham’s sudden death is “going to take forever to accept.”

Two days before the reunion, Bogomolny called the Tel Aviv Hilton and learned that her classmate had not checked in, as planned. After the reunion, she grew more worried and asked Becker to call Siton’s wife in Long Branch, N.J.

On the phone, Becker didn’t understand what “passed away” meant, so he asked to speak with someone fluent in Hebrew. Buddy Sutton came on the line and told Becker what had happened, adding that his brother had been healthy and active. Bogomolny called, too, and Sutton described Avraham’s great anticipation of the reunion.

Now the surviving classmates grapple with the cruelty of it all, especially the timing. Psalm 30:11 speaks of turning mourning to joy; now the order was reversed.

Mini-reunions will continue. Before returning to Toronto, Bogomolny will get together with two classmates residing near Tel Aviv. A friend living on Kibbutz Degania invited Becker to visit. The conversations will extend the joy and the mourning.

“It’s a paradox,” Becker said. “If we’d … known he died, I wonder whether the event would have proceeded – and if it did, what the atmosphere would have been. It certainly wouldn’t have been happy. This was the fates laughing.”

Bogomolny had invested her all into this once-in-a-lifetime event.

“Sometimes I wonder if it was a good idea to have a reunion. Maybe if I didn’t have the reunion, he’d still be alive,” she said. “Maybe he was overexcited.”

Bogomolny can take solace in the reunion having drawn Siton back toward his childhood friends. For those he would never see again, he’ll remain forever young.