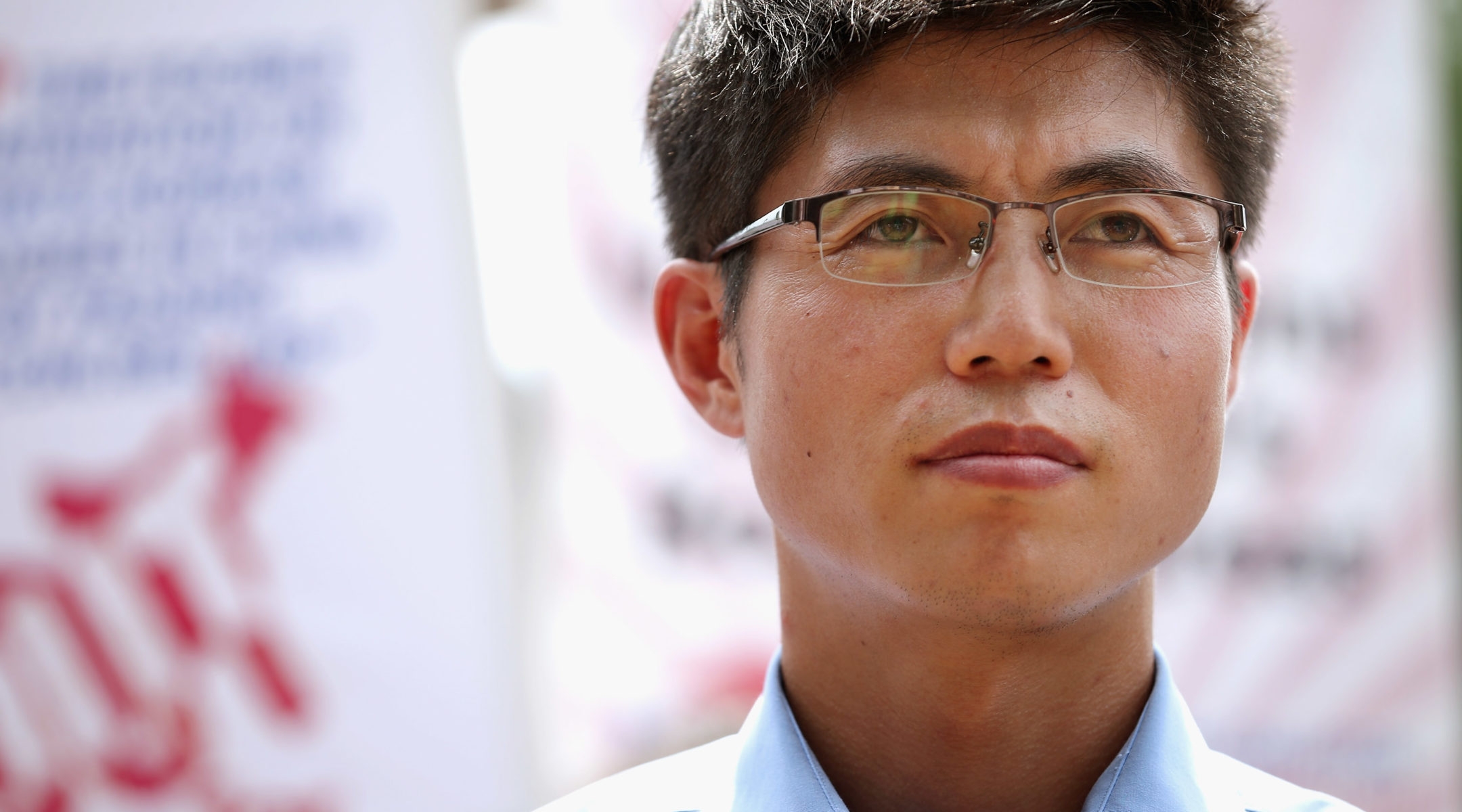 BRUSSELS (JTA) — When guards dragged Shin Dong-hyuk from his North Korean cell in 1995, he was pretty sure the end was near.

Dong-hyuk, then just 13, was born in the prison known as Camp 14, not far from Pyongyang. Camp 14 is part of a network of political prisons believed to be the largest in the world, where an estimated 150,000 dissidents and their families live in conditions reminiscent of Holocaust-era concentration camps.

As he was brought to the camp’s execution field, Dong-hyuk realized he wasn’t the one due to be killed that day — it was his mother and brother. The boy calmly watched the executions, he says now, having been brainwashed into believing his family members deserved to die. After all, he was the one who had turned them in.

“They hanged her and shot him for planning to escape,” Dong-hyuk, now 31, told JTA in Brussels. “I was only brought to watch.”

In 2005, Dong-hyuk (pronounced dong-YUKE) became the only known survivor of Camp 14. In the years since, he has traveled the world raising the alarm about North Korea’s treatment of political dissidents, including five visits to the U.S. Holocaust Memorial Museum in Washington and a meeting with survivors in 2009 at the Simon Wiesenthal Center’s Museum of Tolerance in Los Angeles. He plans to visit Yad Vashem in Jerusalem later this year.

Earlier this month, he addressed a European Parliament conference on North Korea’s camps and was awarded the Moral Courage Award from the American Jewish Committee-affiliated group UN Watch, which considers Dong-hyuk a prime example of the human rights abuses overlooked in the world body’s eagerness to focus its attention on Israel.

To date, the U.N. Human Rights Council in Geneva has convened 19 special sessions, none on North Korea. Israel has been the subject of six — more than the Syrian civil war, in which 90,000 people are believed to have died, or the genocide in Darfur, which has claimed the lives of hundreds of thousands, according to some estimates.

“Shin Dong-hyuk doesn’t touch on our agenda, he is our agenda,” said Hillel Neuer, the director of UN Watch, “drawing attention to major human rights abuses that do not receive the attention they merit.”

Human rights investigators believe that many of the prisoners in North Korea’s six known political prisons were either born there, like Dong-hyuk, or placed there because their families had ties to suspected dissidents. Dong-hyuk’s father and grandfather were incarcerated because two of the grandfather’s brothers had defected, Dong-hyuk said in a recent interview on “60 Minutes.”

Dong-hyuk’s accounts of his treatment at the hands of sadistic guards, and the arbitrary torture to which he was subjected, are reminiscent of Holocaust accounts. But Dong-hyuk is careful to avoid such comparisons, saying the only thing Nazi camps have in common with those in North Korea is “that they never should have existed.” Yet he feels a certain kinship with survivors of the Nazis.

Yoon Yeo-sang of the Seoul-based Database Center for North Korean Human Rights is not so reticent, likening global inaction on North Korean camps to the world’s indifference to the Nazi genocide in Europe.

“What goes on in North Korea is maybe worse than the Holocaust, where the Nazis were active for 12 years,” Yeo-sang said. “The enslavement of the camps in North Korea has been going on for decades.”

Dong-hyuk lost a piece of his index finger as punishment for breaking a machine at a military factory where he and his family were forced to work. Another time he was given a choice between hunger and a beating. He chose the beating.

The North Korean government has long denied the existence of political prisons, and in the absence of other escapees, there is no way to corroborate details of Dong-hyuk’s story. But Yeo-sang says that Dong-hyuk’s testimony is consistent with accounts by survivors from different areas.

Dong-hyuk said the trigger for his escape was meeting an inmate named Park, who had been on the other side of the electric fence and told stories of people eating pork and chickens. In the course of their escape attempt, Park was electrocuted and died on the fence. Dong-hyuk says he crawled over his friend’s body to escape.

From the camp, Dong-hyuk walked to China, bribing locals to avoid detection. He now lives in South Korea, where he runs an organization, Inside NK, that tries to publicize the cause of North Korean prisoners and document the testimony of survivors.

“Too much attention goes to [the North Korean leader] Kim Jong-un and his wife and too little attention to ending the camp reality,” Dong-hyuk said.

But there is also a personal reason for his devotion to the cause: Dong-hyuk says he feels guilty for betraying his mother and brother as a boy and hopes that admitting to his actions and raising awareness for other prisoners will serve as a small act of penance.

“Adolf Hitler and the Nazis mostly killed people they did not see as their own, but in North Korea our people are doing this to each other,” Dong-hyuk said. “I don’t know what’s worse.”