Seeking Kin: Unlocking the mystery of a childhood friend 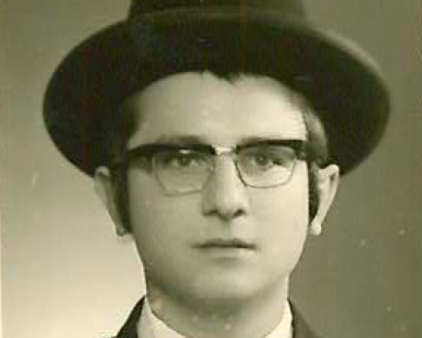 JTA PHOTO: Seeking Kin: Unlocking the mystery of a childhood friend Finding the gravesite of his childhood friend Moshe Zarchi was a goal of Zvi Halevy, shown here at his bar mitzvah, which occurred about the time he last saw Zarchi. (Courtesy Zvi Halevy)
Advertisement 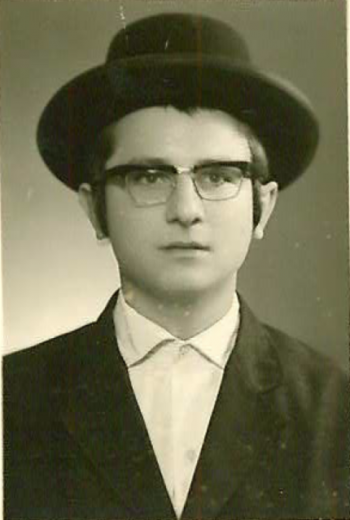 Finding the gravesite of his childhood friend Moshe Zarchi was a goal of Zvi Halevy, shown here at his bar mitzvah, which occurred about the time he last saw Zarchi. (Courtesy Zvi Halevy)

Halevy, 62 and a resident of Netanya, Israel, fondly recalls their friendship. It may have meant even more to Zarchi, whose parents gave him up for adoption.

Halevy learned only recently that Zarchi died in the United States more than 30 years ago – and perhaps was murdered. But he didn’t know where Zarchi had lived or where he was buried. He had hoped to stop by the cemetery during his next visit to his daughter and grandchildren, who live in Brooklyn, N.Y.

“Seeking Kin” learned recently that Zarchi is buried much closer to home: in the Eretz HaChaim Cemetery in Beit Shemesh, approximately 50 miles from Netanya.

“I’ll visit. The circle will be closed. I accept the situation, that these are the facts,” Halevy said. “It’s a shame that I didn’t meet him [later] in life, but the fact he’s buried in Israel is extraordinary.”

From 1959 to 1965 – Halevy gave the years as 5719 to 5724, from the Jewish calendar – the two boys attended the Belz Talmud Torah, an all-male, haredi Orthodox elementary school still operating at 63 Ahad Ha’Am St. in Tel Aviv. They were roommates for at least three years, and lived with one or two other students. Each morning, the children said Shacharit prayers, ate breakfast, attended Judaic classes and had recess. After lunch they had more classes, evening and nighttime prayers, dinner and secular studies.

“It was a very busy schedule,” Halevy said in an understatement.

Halevy liked spending time with Zarchi because of his intelligence and creativity. Halevy remembers him as someone who did “very sophisticated crafts,” like carving wood and making colored-sand designs in bottles.

“He had the hands of a craftsman. I liked studying with him because he had a sharp mind. I don’t know what his IQ was, but I’d have to think it was 120,” said Halevy, who would know such things from having spent 40 years as a teacher and principal of Judaic and secular subjects in Netanya’s haredi Horev School.

Wanting to know what became of his classmate, Halevy was interviewed on the Israeli radio program “Hamador L’chipus Krovim” (Searching for Relatives Bureau) in October. Last month, the show’s host, Izi Mann, received a telephone call from someone who connected Halevy to the family of Simcha Bunim Sonnenschein, a widower who had adopted Zarchi.

Although Sonnenschein died in 1998, his brother, Yosef Elimelech Sonnenschein, is now in his 90s and lives on Moshav Komemiyut, near Ashkelon. Halevy drove there in May to visit him and Yosef Elimelech’s daughter, Nechama Hoffman. He learned that Zarchi often visited the moshav on vacations from school. Halevy recognized a photograph of Simcha Bunim as the man who occasionally visited Zarchi at the Belz school.

At the moshav, Halevy learned that Zarchi had moved to the United States, married and had two children. But his hosts did not know their names, where Zarchi settled, when or how he had died, and where he was buried.

Malka Teichman, the daughter of Simcha Bunim and his second wife, Rachel, told “Seeking Kin” that she does not remember much about Zarchi because he had left home to serve in the military while she was young. Zarchi’s biological parents were poor and planned to hand him over to a Christian family or even a cult when her father, then living in Kfar Hasidim, near Haifa, intervened and adopted him. Teichman did not know his profession in America, but remembered her father saying that Zarchi had been murdered. 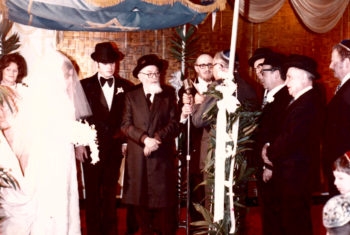 Moshe Zarchi, shown during his wedding in the United States, was the Israeli classmate whom Zvi Halevy had hoped to find. (Courtesy Malka Teichman)

Zarchi apparently received little attention in the Sonnenschein home. Rachel was a Holocaust survivor from Czechoslovakia who entered the marriage with five children of her own. Her first husband, Zvi Adler, was killed by terrorists while on guard duty near Jerusalem, Teichman said. Shortly after marrying Rachel, Simcha Bunim changed their surname back to Sonnenschein because she disliked the name Zarchi.

Halevy remembered his friend having entered the Belz school under a different pre-adoption surname, which later was changed to Zarchi. Halevy also recalled the boy being a Haifa native.

The search for Zarchi’s family and burial place apparently would remain open. But “Seeking Kin” contacted Teichman again, and she reported that her stepbrother, Aharon Adler, while visiting the previous Shabbat had mentioned Zarchi’s burial in the Beit Shemesh cemetery.

“Seeking Kin” confirmed that fact with a cemetery official, with a twist: Zarchi appears in the records as Moshe Isakovitch. He died on 25 Tevet 5741 and was buried in the Yeshiva University section in block 5, section 4. The Jewish date corresponds to Dec. 31, 1980 or Jan. 1, 1981, which matches the online searches revealing Isakovitch’s birth in 1951 and death in December 1980.

The official said his records list Isakovitch’s brothers as Shlomo and Yona and their father as Yitzhak. The official, who said he remembered the long-ago burial, recalled that Zarchi was a taxi driver who was killed.

The facts point to the correct person because Teichman had said Zarchi’s original surname was Isakovitch.

Halevy had long wanted to find his old friend so they could discuss their childhood memories. When he learned that Zarchi was dead, even killed, “I felt like I’d been smacked,” said Halevy, a father of six and grandfather of 25.

He now hopes to locate his friend’s survivors to learn more of his background.

(Please email Hillel Kuttler at seekingkin@jta.org if you know the whereabouts of the survivors of Moshe Isakovitch/Zarchi. If you would like “Seeking Kin” to write about your search for long-lost relatives and friends, please include the principal facts and your contact information in a brief email. “Seeking Kin” is sponsored by Bryna Shuchat and Joshua Landes and family in loving memory of their mother and grandmother, Miriam Shuchat, a lifelong uniter of the Jewish people.)