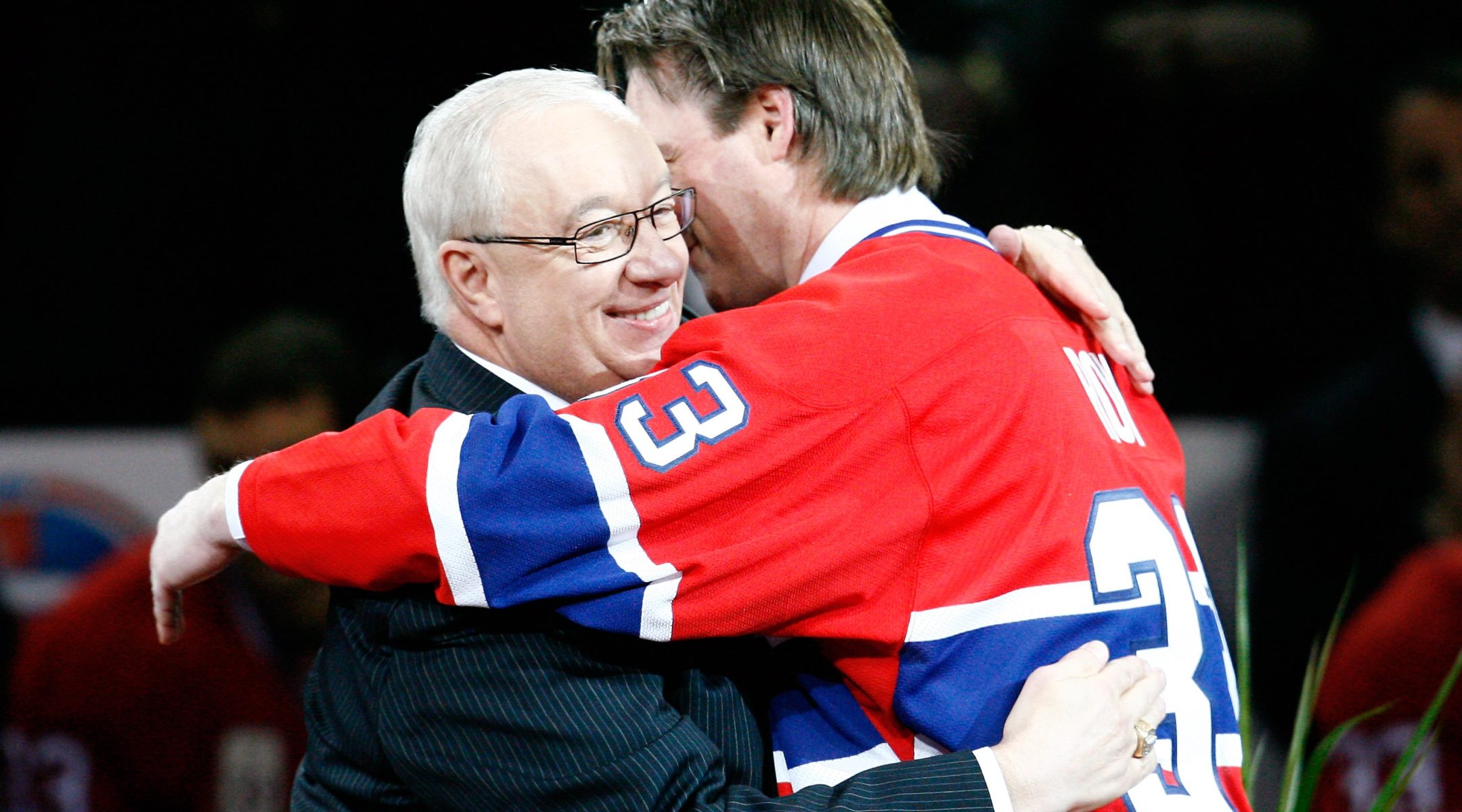 JERUSALEM (JTA) — Of all the compelling stories of athletic achievement and challenges overcome that could be told by the 9,000 participants gathering in Israel for the 19th Maccabiah Games, it might be hard to find one to top the tale of Jacques Demers.

He’s a coaching legend, having led the iconic Montreal Canadiens to the National Hockey League championship in 1993. He’s also a member of the Canadian Parliament.

And until about a decade ago, he would have been unable to read the words in this article.

Demers disclosed in his 2005 autobiography that he was functionally illiterate, a result of a traumatic childhood with an alcoholic father who beat him and his mother.

“I suffered from a tremendous amount of anxiety,” Demers told JTA in an interview last week from his home outside Montreal. “When you have that problem, people think you’re dumb and stupid.”

Demers, who unlike his players is not Jewish, will be behind the bench for the Canadian master’s team at the Maccabiah, the quadrennial gathering of Jewish athletes that opens Thursday in Israel.

It will be his second Maccabiah coaching appearance for Canada; in 1997, he guided the open division squad to a gold medal. The team included David Nemirovsky, a right wing who played three seasons in the NHL.

No one on that level will be on Demers’ roster this time as Canada competes against teams from the United States, Israel and Ukraine. But Demers is clear about one thing: As much as he loves Israel, this is a business trip. He means to bring out the best effort of his players and, he hopes, capture the gold.

Demers did plenty of winning in the NHL. He reached the playoffs in eight of his first 10 seasons coaching in the league, taking three division titles. His Stanley Cup-winning Canadiens finished third in their division despite attaining the most victories, 48, and points, 102, for any team he had ever coached.

When he addressed his Maccabiah team before it took the ice against the United States in the gold medal game in 1997, Demers dangled his country’s most cherished sports motif as a carrot for the players.

“This is your Stanley Cup. You want it, you go get it. This is your moment,” Lawrence Routtenberg, a right wing on the team, recalled Demers as saying.

Demers didn’t treat the Maccabiah “as just a charity event or a minor event,” said Routtenberg, a Montreal resident, who will be playing for Demers again at the Maccabiah.

Demers’ involvement with the Maccabiah has its roots in the strong friendships he has enjoyed with the Montreal Jewish community. They date to his childhood in the city’s Cote-des-Neiges neighborhood, where he delivered groceries to Yiddish-speaking customers.

As the Canadiens coach, Demers got to know Sam Eltes, who sat near the team’s bench at the famed Montreal Forum. About a year after he was fired, Demers was visiting Eltes’ Mercedes dealership when Eltes received a phone call from the head of Maccabi Canada. The caller said he needed a coach for the upcoming games.

The telephone was passed to Demers and the match was made.

Demers “has a love for the Jewish people, without question,” Eltes said. “He’s just a wonderful person.”

But until Demers published his autobiography, Eltes had no idea that his friend was illiterate. In retrospect, there were signs. When Demers would come to buy a car, he would bring his checkbook and tell Eltes to fill in a fair amount.

Demers had fooled his hockey colleagues, too. As a coach, and during his brief tenure as the general manager of the Tampa Bay Lightning, Demers kept his illiteracy a secret, delivering speeches by memory and assigning his assistants to handle paperwork and correspondence.

But coming clean publicly “has been a big plus for me,” Demers said.

His recovery included seeing a psychiatrist and taking medications that control anxiety.

“Sometimes I wonder how I was able to coach,” Demers said. “I think it was on adrenaline because there’s so much go, go, go in hockey.”

As a Canadian senator, a position to which he was appointed four years ago to represent the Conservative Party, Demers has worked to fight illiteracy. He believes that 48 percent of Quebec residents have literacy problems.

“There are a lot of people like me,” he said.

In September, Demers will join the Senate’s Foreign Affairs and International Trade Committee, where he expects Israel to be on his agenda. He also expressed interest in developments in Turkey.

But first there’s a tournament to play in Israel, a country whose citizens Demers admires for their industriousness and tenacity in establishing a homeland and defending themselves. He said he respects the devotion of Montreal Jews to the Jewish state, too.