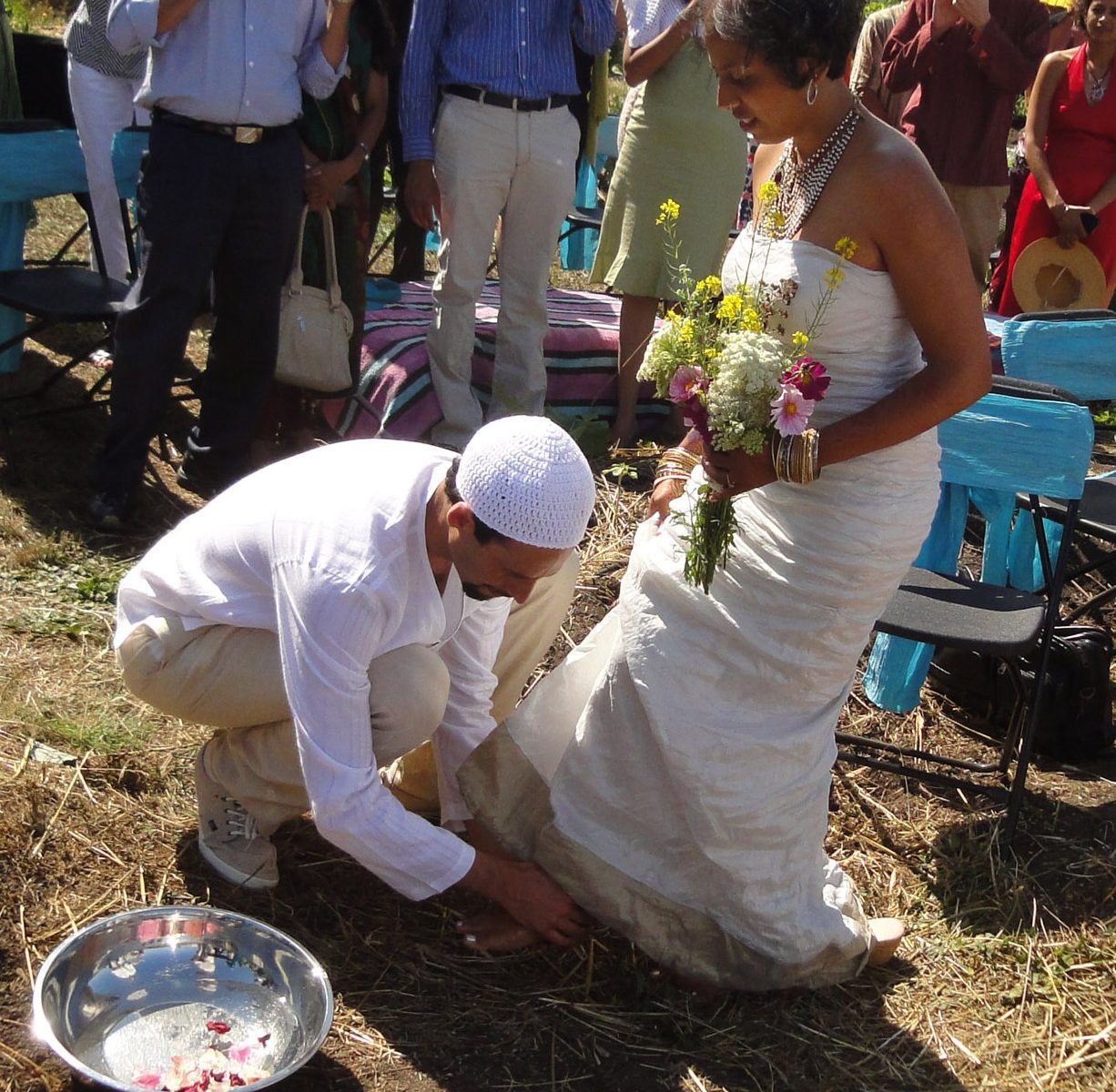 (JTA) — The bride emerged from a yurt, accompanied by her father. The groom and his mother came out of a greenhouse.

The four walked to a circular area delineated by a red string. In the center stood a huppah; beneath the wedding canopy, a copper tin with a small fire.

Micha’el and Aumatma BedarShah were married June 30 at Urban Adamah, a small Jewish educational farm in Berkeley, Calif. The couple chose the farm for their interfaith wedding, believing, as Micha’el put it, that “we understand our traditions so much more clearly when we directly experience the wonder of nature.”

Their fathers each carried a candle to the circular area “so they could both simultaneously light our candles and we could accept both of their heritages,” Micha’el says.

Micha’el, 35, and Aumatma, 32 — whose new surname is a merger of his Jewish last name first followed by her Hindu one — worked with officiant Rabbi Gabriel Cousens, who runs the Tree of Life Rejuvenation Center in Patagonia, Ariz., to plan what the rabbi calls a modern Essene ceremony. The Essenes were a Second Temple period Jewish sect who some scholars believe wrote what came to be known as the Dead Sea Scrolls.

Some aspects of the BedarShahs’ wedding were drawn from the Temple period, with the bride and groom washing each other’s feet and hands, as well as anointing one another with a few drops of oil “to purify each other,” Micha’el said. Frankincense and myrrh incense, used in Temple rituals, burned during the ceremony.

In planning their rituals, the couple were surprised to realize how many elements turned out to be similar to both Judaism and Hinduism. The huppah — in this case, Micha’el’s 100-year-old tattered tallit that had belonged to his grandfather — reminded Aumatma’s father and uncle of a mandap, the ornate covered structure used at Hindu weddings. “The Indian one is usually more stable, but open on all four sides,” she says.

When Micha’el smashed a glass, it was reminiscent of Hindu grooms breaking a clay pot. Both religions have circling rituals: At a traditional Jewish wedding, the bride circles the groom seven times; Hindu couples circle a fire seven times. The BedarShahs did both. And, when they exchanged vows, they did so, Micha’el says, in accordance with “the Torah of Moses and Israel the Vaishnav lineage of Gujurat,” a state in India.

The ceremony began with the sounding of a shofar in four directions, “activating the sacred space” and opening it up to the “Holy One of blessing in its most experientially felt form on the earth plane,” he says. Indian ceremonies use a conch shell to make a similar sound.

While the ceremony merged aspects of Judaism and Hinduism, the menu — other than a challah — lacked traditional staples, though the dietary restrictions of both faiths were observed. With the exception of one lentil-cooked dish, the organic buffet consisted of raw foods, including a “rawsagna” that featured a ricotta-like macadamia-nut cheese substitute, thinly sliced zucchini rather than pasta and raw marinara sauce, and the challah (made from sprouted grains, nuts and seeds).

Kat Morgan, Urban Adamah’s program manager, describes the wedding, the first to be held at the educational farm, as “a converging of worlds.”

“Here we are on a Jewish farm, with elements of Hindu in the ceremony and in the background, we have this big church next door and they of course were having their Sunday services. You could go past and you can hear the gospel music,” she says. “It was just a converging of worlds in a very spiritual way.”

If you know of a lifecycle event that would make a great story, please send an email to Lifecylist@jta.org.