For African migrants in Israel, a life in legal limbo 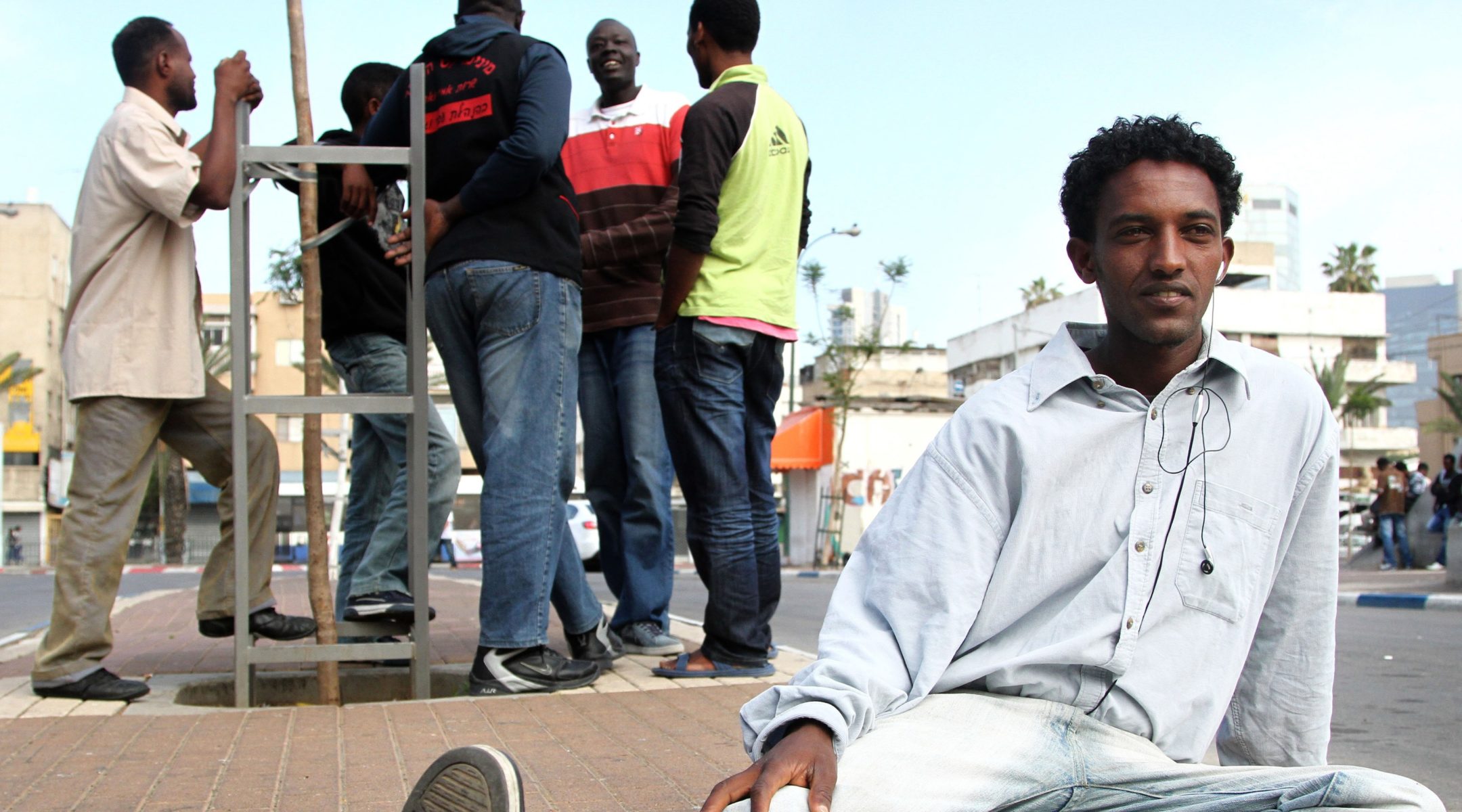 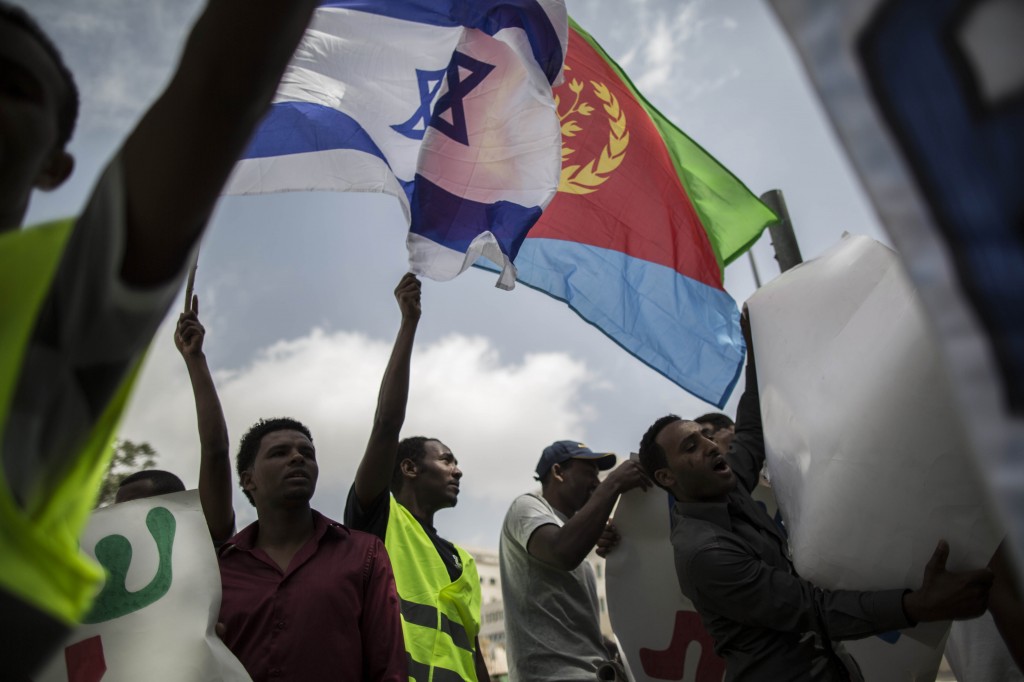 Eritrean refugees gathering outside Prime Minister’s Office in Jerusalem for a demonstration against the deportation of refugees from Israel, June 9, 2013. (Yonatan Sindel/Flash90)

TEL AVIV (JTA) — Hanging by his feet in a torture cell in the Sinai Desert, Dawit Demoz knew he had only one way to escape a nearly certain death: He would have to make good on his captors’ demand of a $3,500 ransom to buy his freedom.

Demoz, 23, tells a harrowing tale of escaping mandatory conscription in the Eritrean Army and following a desperate journey through Sudan, Libya and finally Egypt, where a human trafficking gang captured him in 2010 as he made his way toward the Israeli border.

For three weeks, Demoz claims, he was beaten, electrocuted and hung from the ceiling until his family was able to come up with the money to buy his freedom.

Demoz then was smuggled across the border into Israel, following a path that tens of thousands of Eritreans had followed before. He had hoped his struggles might finally be over. But as soon as he crossed the border, he was thrown in jail.

“I heard that Israel is a democratic country with Jewish people who know what a refugee is because they suffered before,” Demoz said. “So I thought Israel could save our life. But it’s not what I expected.”

Demoz is one of an estimated 62,000 migrants who have illegally crossed into Israel since 2006 — most of them Eritrean men driven from their homeland by an oppressive dictatorship that drafts them into the military as teenagers and can keep them there indefinitely. According to the United Nations, there are more than 300,000 Eritrean refugees and asylum seekers worldwide.

In Israel, they live without fear of torture and death. But their rising numbers have led to a backlash here, prompting a government crackdown that has nearly eliminated the cross-border flow. In July, Israel sent 13 detained Eritreans back home and has been urging others to self-deport for more than a year. 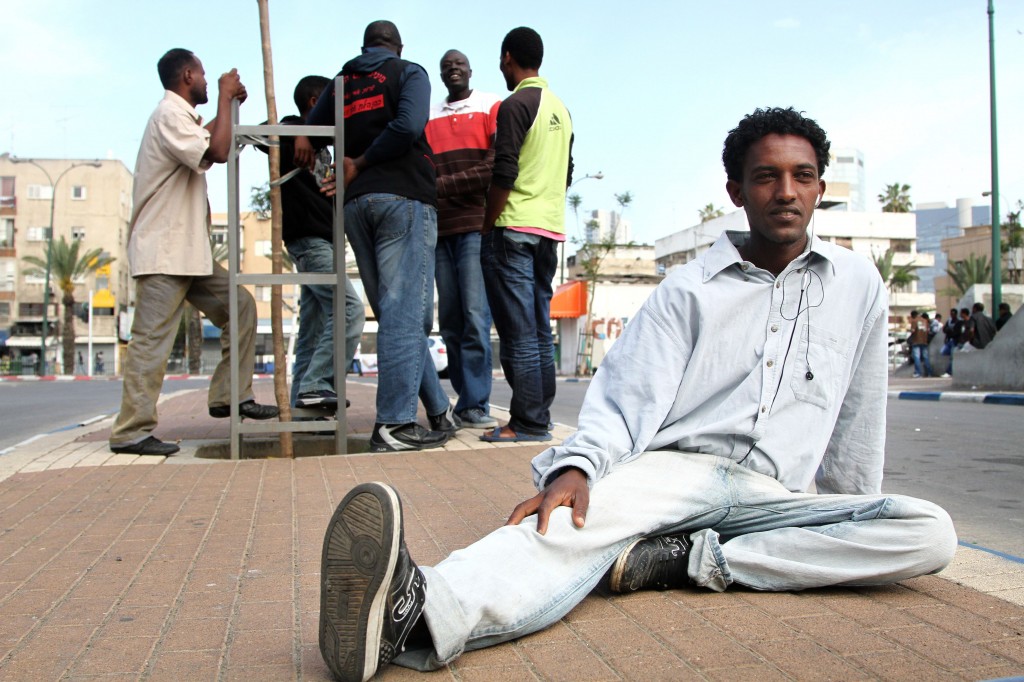 But though the influx has stopped, nearly 55,000 migrants remain in Israel, most of them in Tel Aviv. The government affords them limited rights and services, but does not recognize them as refugees, instead giving them temporary IDs they must renew every three months.

For these migrants, who arrived in Israel with no money, no Hebrew and no work permit, daily life often is a challenge.

“These are people who are here five years, and when they go to the Interior Ministry, they don’t know what will happen,” said Orit Marom, director of public activism for Assaf, a nonprofit that helps illegal migrants receive social services. “They’re always temporary.”

Like many Eritreans who have crossed into Israel, Demoz spent his first three months in jail while Israel determined his status. Upon his release, the army took him to Beersheva and gave him a one-way bus ticket to Tel Aviv.

His first three nights were spent with other Eritreans in a park across from the Tel Aviv bus station. But then a friend from back home found Demoz and took him into a one-room apartment he shared with three other men. It’s crowded, Demoz says, but better than sleeping outside.

“Some don’t have a place to sleep,” said Nordin Ishag, a Darfurian who came to Israel in 2007 and last year founded Darfur Friends Association, a social service organization. “They were sleeping in the park, the street. We cannot let them sleep outside. They are human beings.”

Despite its refusal to grant them permanent residence, the Israeli government provides a range of services to the migrants. Children receive free education through high school and infants get free medical care. This year, the Health Ministry opened an emergency medical clinic for migrants at the Tel Aviv Central Bus Station, and a Tel Aviv municipal program provides child psychiatric services and access to government services to the migrant population.

An array of community nonprofits also have sprung up to help.

For many, $25 is a significant sum. Demoz’s first job in Israel, working seven days a week at a metal shop, paid him just about $6.50 an hour. He has found each of his subsequent jobs — pool cleaning, building platforms for construction and working at a Herzliya hotel — through employment contractors in south Tel Aviv. The contractors match asylum seekers with jobs and pay their salaries — often with fees attached, ostensibly for taxes.

“There is one big problem here — we have no ID, no papers, no life,” said Sammy, 32, an Eritrean who worked 14 hours a day, seven days a week as a restaurant dishwasher before he was fired, with no severance, after three years.

Sammy was interviewed recently at a health clinic for asylum seekers and migrant workers run by Physicians for Human Rights-Israel. The clinic, staffed by volunteer doctors with specialties ranging from gynecology to physiotherapy, treats 7,000 people a year. For many of them, it is their only realistic way to get health care.

“It’s difficult to get a doctor beyond the human rights doctors,” said Ananwuna, 41, who said he owes nearly $10,000 to an Israeli health care provider for the 2010 removal of a uterine tumor.

Some Eritreans have managed to achieve a measure of success. Habton Mehari, 31, who came here in 2007 and calls himself “the luckiest refugee in Israel,” is on a full scholarship at Ben-Gurion University.

As of last year, he’s also a father, but the Interior Ministry won’t register his son in his name. He is also $3,000 in debt from his wife’s labor, he says, and often faces racism when he leaves campus.

For Demoz, the future remains uncertain. He hopes to be able to return home at some point. Until then, he wants the Israeli government to recognize him as a refugee.

“I want to be here and for the Israeli government to treat me like a human being,” he said. “All Eritreans who live in Israel want to go back to Eritrea, but we can’t go back now. These people have no other option.”