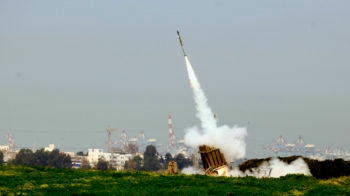 Israel’s Iron Dome defense system near the Israeli town of Ashdod has intercepted a volley of rockets fired by terrorist groups from the Gaza Strip area, March 11, 2012. (Flash90)

(JTA) — The Israeli army has deployed the Iron Dome rocket interception system around Tel Aviv in preparation for a possible strike by Syria.

The Iron Dome deployment near Tel Aviv was completed on Friday morning, Army Radio reported, adding it was the first time the system has been readied to intercept inbound fire from the north.

The deployment comes as expectations mount that the United States will launch a strike against Syrian President Bashar Assad’s forces following a chemical weapons attack last week that killed hundreds near Damascus. Syria has threatened to target Israel if it is hit.

On Thursday, administration officials told the New York Times that President Obama was prepared to move ahead with a limited military strike against Syria despite a stinging rejection of such action by the United Kingdom and mounting questions from Congress.

Britain’s parliament rejected a motion Thursday that would have mandated a military response to the chemical attack by Syria. The vote was a heavy blow to Prime Minister David Cameron, who had pledged his support to Obama and called on lawmakers to endorse Britain’s involvement in a brief operation to punish Assad for the attack, which American intelligence believes was ordered by the regime.

The vote was also a setback for Obama, who, having given up hope of getting United Nations Security Council authorization for the strike, is struggling to assemble a coalition of allies against Syria.

But unnamed administration officials made clear that the eroding support would not deter Obama in deciding to go ahead with a strike, the Times reported.

Pentagon officials said that the Navy had now moved a fifth destroyer into the eastern Mediterranean Sea. Each ship carries dozens of Tomahawk cruise missiles that would likely be the centerpiece of any attack on Syria.