Ethiopian aliyah: Mission accomplished. Absorption and integration, not so much

Ethiopian Jews kissing the ground upon arrival at Ben Gurion Airport as part of Operation Wings of Dove, which ended the Ethiopian immigration to Israel, Aug. 28, 2013. (Miriam Alster/Flash90/JTA)

LOD, Israel (JTA) — The airplane landed on the tarmac, “Ethiopia” emblazoned in red on its side.

A few government officials trickled down the airplane’s steps. They were followed by groups of Ethiopian Jews descending to the runway, some falling to their knees and kissing the ground. Inside the terminal building, shouts in Amharic greeted the new arrivals as friends and relatives, some separated from the immigrants for years, welcomed them to their new home.

“We are finishing an exile of 2,500 years,” Israeli Housing Minister Uri Ariel told the crowd. “But the work is not over. Now we have to make sure these new immigrants integrate into Israeli society, learning from the mistakes that were made in the past.”

Three decades of Ethiopian immigration to Israel culminated with the arrival of two planes at Ben Gurion Airport on Aug. 28, the 450 immigrants on board representing the last of more than 125,000 Ethiopians who have come during that period.

Ethiopian immigrants have been celebrated in Israel since the first waves began arriving in the early 1980s, and government ministers and dignitaries gathered in force to welcome the final arrivals. But while the crowd was mostly Ethiopians, all but one of the speakers at the welcoming ceremony was either Russian or Ashkenazi.

The split illustrates the challenge that Israel has faced in absorbing the Ethiopians, who have faced a range of integration obstacles. Ethiopians lag native Jewish Israelis in a wide range of socioeconomic metrics that have remained largely resistant to government efforts at budging them. Earlier this year, the government parried allegations that it coerced Ethiopian women into receiving a long-term contraceptive injection.

According to Israel’s Central Bureau of Statistics, only 43 percent of Ethiopian students passed their high school matriculation exams in 2011; only 22 percent scored high enough to go to college. Among all Jewish Israeli students, those numbers are 58 and 50 percent, respectively.

Ziva Mekonen-Degu, who directs the Israel Association for Ethiopian Jews, says that many Ethiopian parents are themselves uneducated and have little means.

“The parents can’t give the help that other parents can,” Mekonen-Degu said. “Ethiopian parents aren’t involved or influential enough.”

The problems continue into the army. Although Ethiopians have an above-average enlistment rate, they’re also more likely to end up in military prison or to drop out early. 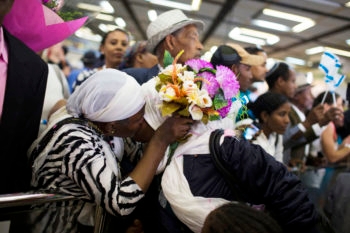 In addition, virtually all Jews born in Ethiopia are ineligible for vocational training programs offered by the Economics Ministry because nearly no one has a formal education. Instead, the absorption centers where Ethiopians live after immigration often connect them with service jobs such as cleaning or factory work.

Those jobs, in turn, make it harder for Ethiopians to purchase homes. As of 2010, Ethiopian homes were worth half that of the average Israeli home.

“Many of them were illiterate in Ethiopia,” said Jack Habib, director of the Myers-JDC-Brookdale Institute, a government-funded think tank that studies Ethiopian Israelis. “You’re not going to take people like that and get them into higher-level jobs. You can’t elevate the quality of jobs unless you equalize educational distribution.”

The Israeli government, along with several nonprofit organizations, provides a range of services and benefits to Ethiopian Israelis. The Absorption Ministry offers free college tuition, tutoring, loans and lower mortgage rates to Ethiopians. Solomon is pushing to enforce a law mandating that Ethiopians comprise 1.5 percent of all government employees. And Mekonen-Degu is lobbying the government to provide stipends for Ethiopians who enter vocational training programs.

“If I give [students] tools to deal with issues, they’ll succeed,” said Roni Akale, director-general of the Ethiopian National Project, a program that provided tutoring and youth activities for 4,500 Ethiopian teens last year. “What I can do is make them feel confident academically and socially.”

Government projects for Ethiopians, though, have a mixed record.

Homesh, a $230 million program for Ethiopian advancement run by five government ministries, was declared a “failure” by an official report earlier this year. According to the report, the program was disorganized, lacked accountability and failed to formulate a workable budget.

The answer to Ethiopian woes, says Solomon, lies not in government subsidies but in combating racism. According to Myers-JDC-Brookdale, about one in three Ethiopians has experienced discrimination.

“This has to come from the top; it has to be a clear message,” Solomon said. “The government needs to pass laws and place heavy punishments so that racism won’t happen.”

Even with the obstacles, a sense of optimism prevailed at the welcoming ceremony last month. Some veteran Ethiopian immigrants said that despite hardships they face in Israel, there’s no place they’d rather be.

“I found what I was looking for here,” said Ezra Eschale, who moved to Israel three years ago. “We were like this once. Everything will work out.”