In Ukraine protests, young Jews are marching with ultranationalists 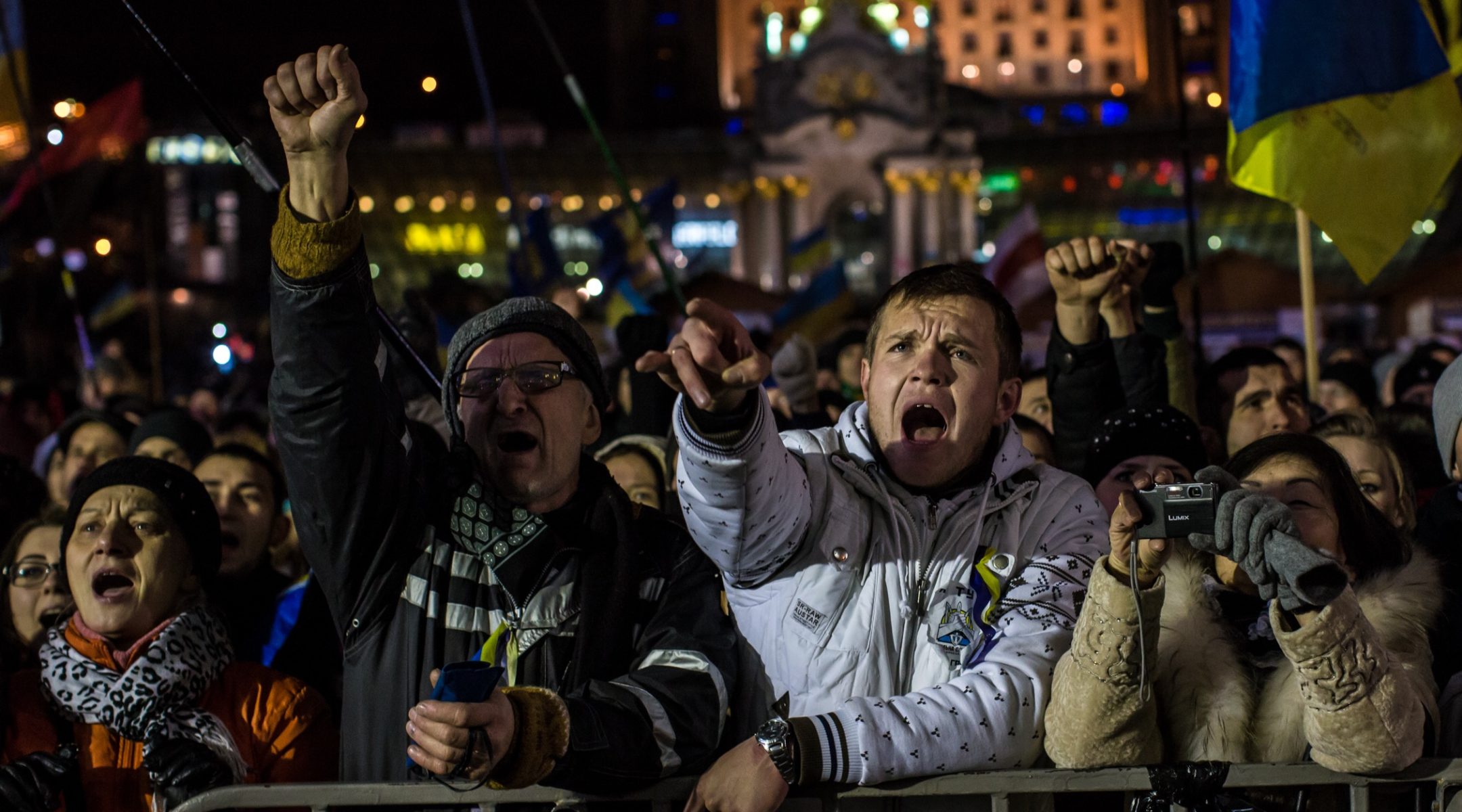 (JTA) — On the last evening in November, at least 31 protesters were taken into custody and dozens treated for injuries following a violent confrontation with Ukrainian police in Kiev’s Independence Square.

But that wasn’t enough to intimidate the crowds who have occupied the  main square of the capital since Nov. 21. Thousands showed up the following morning, including a young woman carrying a 10-liter pot of fresh borscht to help the crowd through another cold day on the square.

It was “like a carnival,” said Dmitri Gerasimov, 32, a Jewish klezmer musician who has taken part in the protests. “I didn’t feel any aggression in the crowd. It was like a public holiday.”

The ongoing protests — known widely as EuroMaidan, after the Ukrainian name for the square in which they have taken place — were sparked initially by anger over President Viktor Yanukovych’s refusal to sign an agreement that would have deepened ties between Ukraine and the European Union.

They have since blossomed into a full-blown movement seeking Yanukovych’s resignation, along with calls for an end to corruption and the “selective prosecution” that has landed opposition leaders in jail. The protesters also want a strengthened social safety net.

A number of young Jews are involved in the protests, which have drawn together a diverse coalition of liberal youth and opposition party leaders, including members of the ultranationalist Svoboda (Freedom) party, whose leader, Oleh Tyahnybok, has freely trafficked anti-Semitic stereotypes.

“If the nationalists are in favor of a regime change in the country, and I am also, then they won’t prevent me from going out into the Maidan with everyone and expressing my opinions,” Evgenia Talinovskaya told JTA. “The EuroMaidan movement is primarily identified with the educated youth. And Jewish youth in Ukraine primarily fall under that description.”

While it is difficult to know how much support there is for the protest movement among young Ukrainian Jews, the country’s orientation toward Europe has proven a divisive issue within its Jewish community. Older Jews tend to be more fearful of Ukrainian nationalists, whose resentment of Russian influence has led them to support a more pro-Europe orientation.

The community “is very split on the issue of the protests,” said Meylakh Sheykhet, Ukraine director for the Union of Councils for Jews in the Former Soviet Union. “Generally speaking, the young generation of Jews, just like other young Ukrainians, support this revolution. But the older generation of Ukrainian Jews, the ones who grew up and were educated in the Soviet system, they are not in support. They are very pro-Russian.”

Right-wing parties such as Svoboda, which garnered 10 percent of the national vote in 2012 parliamentary elections to become the fourth-largest party in Ukraine, bristle at Russia’s influence over their country. They have embraced EuroMaidan despite the right-wing tendency, evident elsewhere in Europe, to resist the encroachment of the European Union.

Ukrainian Jewish leaders have been unnerved by Svoboda, which it considers a threat to community security. The party’s use of anti-Semitic rhetoric also has prompted concern from the European Parliament.

“We fear that this situation will get out of control,” Rabbi Pinchas Vishedski, head of the Jewish community organization in the eastern Ukrainian city of Donetsk, told JTA. “And when there is chaos, minorities will suffer, as our history tells us.”

Other Jewish community officials, including the chief Chabad rabbi of Ukraine, Moshe Azman, have likewise condemned the protests as dangerous for the Jewish community. But those concerns have not been enough to keep Jews from joining the protest movement.

After mass emigrations in the 1970s and 1990s, the Jewish community in Ukraine shows no signs of leaving. And for young Jews, investment in Ukraine’s future is a part of their identity.

“I love Ukraine very much,” Talinovskaya said. “My parents are here, my friends are here, and I have no plans on emigrating, which means my children will be born here.”

Other Jews active in EuroMaidan echoed her sentiments.

Ahava (Anuta) Teslenko, a 29-year-old model and television personality, told JTA she considers her role in the movement “a demand of the soul and the mind” borne of the “necessity for an independent Ukraine.” And Gerasimov said EuroMaidan is a protest against a “Russian future” for the country.

“Many Ukrainian Jews who considered themselves Jews first have left Ukraine already,” Sheykhet told JTA. “So those who stayed, and who now make up the majority of the Jewish presence in Ukraine, consider themselves Ukrainian first.”

Anna Furman, 22, said being Jewish is no obstacle to her passionate involvement in the fight for Ukraine’s future. Like other young protesters, she believes a pro-European orientation for Ukraine, and the reforms that will entail, will change her country for the better.

“It’s important to note that healthy and informed nationalism entails support for the religious and cultural heritage of the people,” Furman told JTA. “What’s important is that this is the country we live in, and we are its citizens here and now. We can’t close our eyes to what’s happening around us.”

“None of us think that joining the European association will magically make our lives perfect, like a fairy tale,” Talinovskaya said. “But we have to start somewhere.”