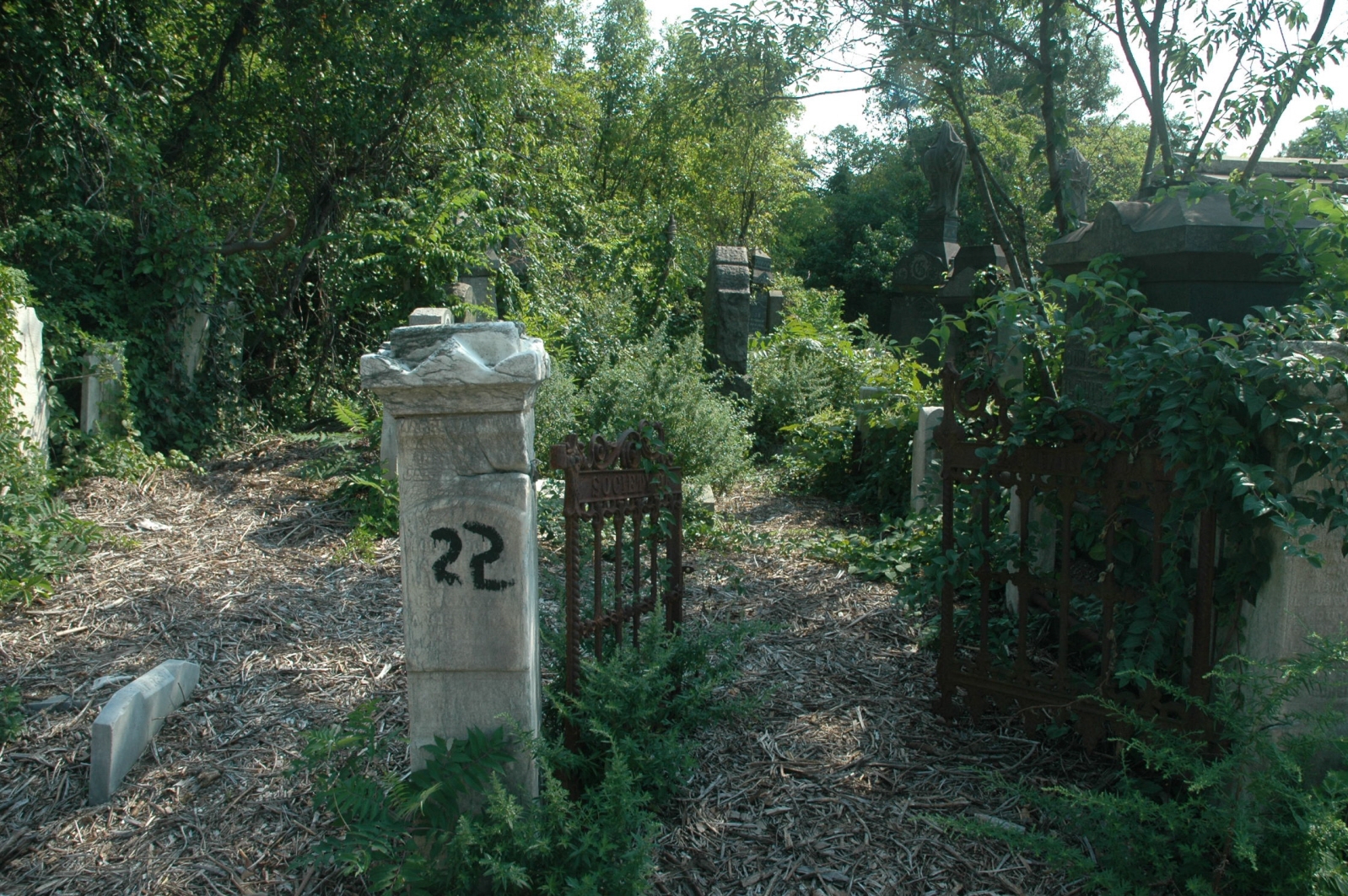 A section of New York's Bayside Cemetery in Queens before a UJA-Federation-funded cleanup. (Courtesy of the Community Association for Jewish At-Risk Cemeteries)
Advertisement

NEW YORK (JTA) — For years, the historic Jewish cemetery was so overgrown with weeds, plagued by toppled headstones, and littered with fallen branches, beer cans and snack-food wrappers that at least a quarter of its graves were impossible to reach.

Even now, after a $140,000 cleanup and improved maintenance procedures, the 35,000-grave cemetery relies on the generosity of a non-Jewish volunteer to repair its tombstones, fences and mausoleums.

The cemetery isn’t in Eastern Europe. It’s the Bayside Cemetery in the Queens borough of New York City, and it’s among countless Jewish cemeteries across the country in varying states of disrepair. Some 40 to 50 of them are in the New York area alone.

There are a plethora of reasons for Jewish cemeteries’ troubles. Many are owned by synagogues, associations or burial societies that no longer exist or are on their last legs. Once a cemetery stops bringing in revenues – i.e. fresh graves — the operating budget dries up unless sufficient money has been set aside for the long term. At Bayside, annual cemetery upkeep costs $90,000. 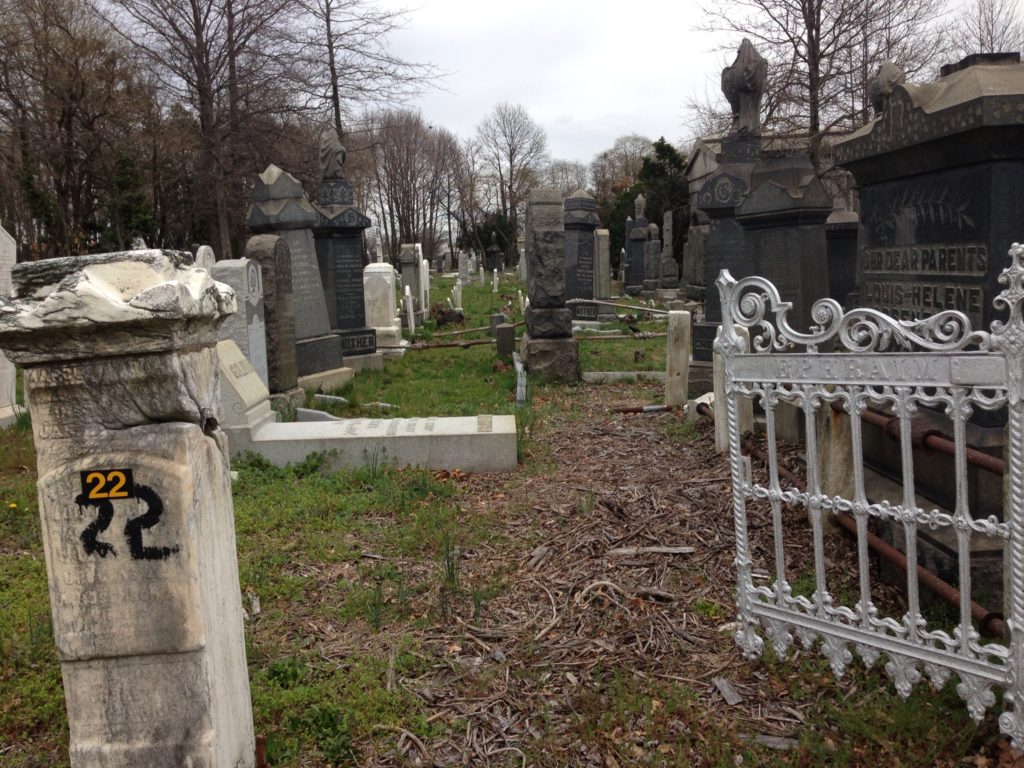 A section of New York’s Bayside Cemetery in Queens after a UJA-Federation-funded cleanup. (Courtesy of the Community Association for Jewish At-Risk Cemeteries)

“Based on current practices, substantially all Jewish cemeteries will be unable to pay for their upkeep within 25 to 50 years after their last grave is sold,” said Gary Katz, president of New York’s Community Association for Jewish At-Risk Cemeteries, a group founded in 2007 and funded largely by UJA-Federation of New York.

While most nonprofit cemeteries are required to put aside a certain percentage of their revenues into endowment funds for the future — ranging from 10 percent to 40 percent, depending on the state — most experts say that amount is not enough to ensure a cemetery will remain financially viable. Furthermore, many Jewish cemeteries are registered as religious organizations and wholly exempt from state regulations. At such cemeteries, plot owners have no way of knowing whether the family plot will be maintained two or three generations on.

Mark Stempa, who according to tax filings earned more than $500,000 in 2012 running two large nonprofit Jewish cemeteries in Queens — Mount Zion and Mount Carmel — and is a paid board member of a third, says his cemeteries are approaching capacity and already relying on investment income to cover operations.

“We conservatively invest, and hopefully that income generated from the trust funds is going to care for the cemetery in the future,” he told JTA. But, Stempa acknowledged, “What’s going to happen in 100 years, I really don’t know.”

“As the community changes, we’ll have more defaults,” Kaplan said.

In city after city, local Jewish communities – often, as in Bayside’s case, the local federation – are having to step in and put up money to save Jewish burial grounds.

“If the cemetery doesn’t have enough money and its owners abandon it, whose responsibility will it be to take care of it?” asked David Zinner, executive director of Kavod v’Nichum, a national organization that provides training to Jewish burial societies.

A number of communities are trying to ensure that their Jewish cemeteries are cared for in perpetuity by reshaping the way their cemeteries operate. The focus is on collaboration and long-term financial planning.

The Jewish Cemeteries of Greater Cincinnati was established as a nonprofit in 2004 by pooling the endowments of struggling and financially viable cemeteries and raising $6 million. The organization now runs most of the Cincinnati area’s Jewish cemeteries.

“We were very fortunate to have the Jewish foundation willing to put up a lot of money to make this happen,” said David Hoguet, executive director of the organization. “If money were available in other cities, you’d see more of this happening.”

The Jewish Cemetery Association of Massachusetts, created in 1984, now manages 108 cemeteries. It originally took over only insolvent cemeteries, but later absorbed several healthy and operational ones as well. It has raised $10 million to endow its operations — one-fourth of what is needed to cover its annual expenses in perpetuity.

A cemetery association launched in 2004 by the Jewish federation in New Haven, Conn., has taken ownership of eight cemeteries and created a centralized maintenance system that other Jewish cemeteries pay to use.

But cemetery collectives are the exception rather than the rule. Most Jewish communities don’t have any central association to deal with cemeteries, and those that do often have minimal funding or limited purviews. It’s also hard to get operational and financially healthy cemeteries that might be able to subsidize the care of other cemeteries to come under a communal umbrella.

Zinner says Jewish communities need to face the challenges of cemetery maintenance collectively – and ahead of time.

“Don’t wait until there’s a disaster,” he said. “Every Jewish cemetery should have a representative of the Jewish community at large on its board.”