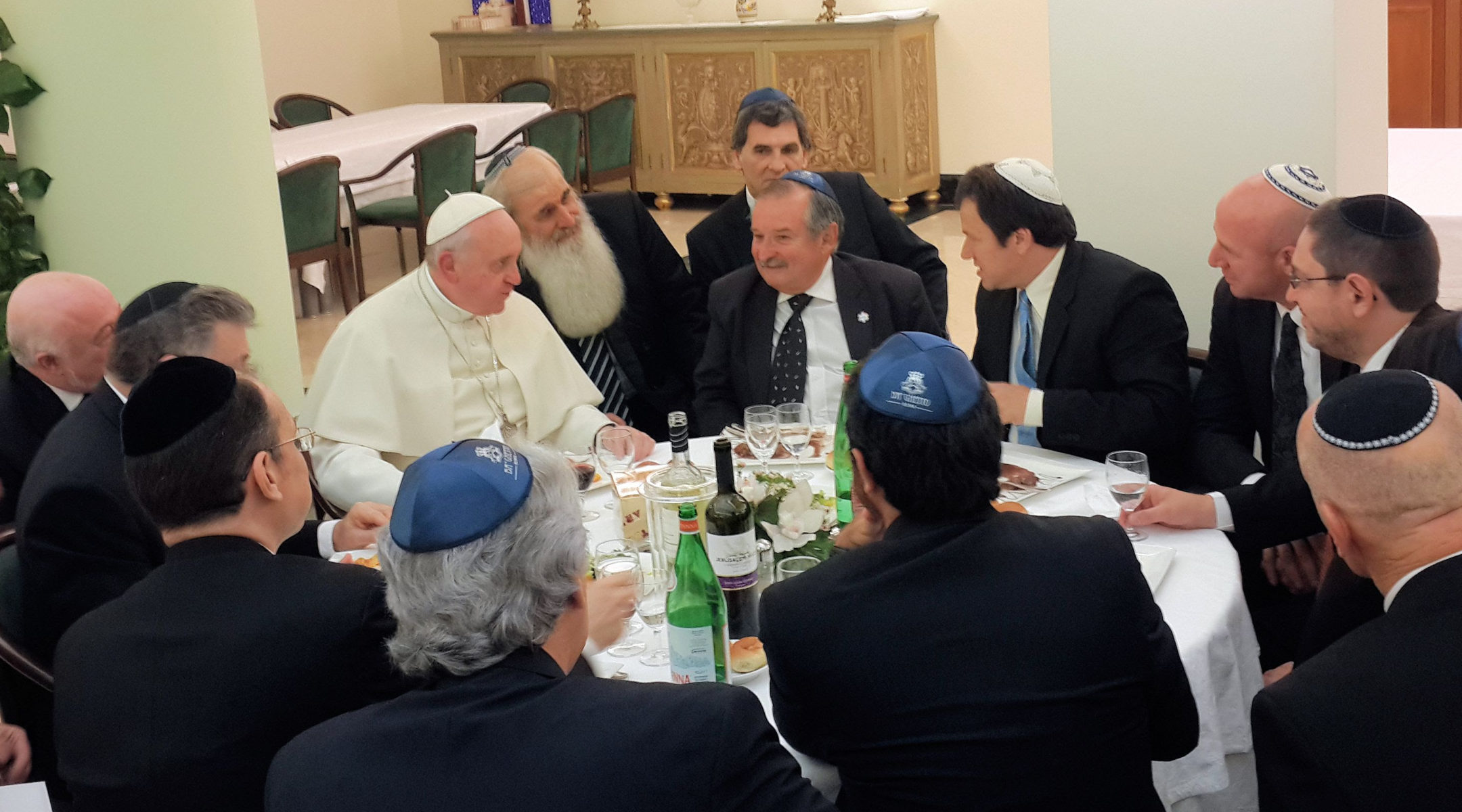 ROME (JTA) — Pope Francis treated a Jewish delegation from his native Argentina to a private lunch catered by one of Rome’s top kosher restaurants.

On Thursday, proprietors of the restaurant Ba’ Ghetto brought Roman Jewish specialties to the Vatican, where the pope hosted the group of rabbis and Jewish leaders at the Santa Marta guesthouse, his residence. A photograph showed the group seated at a round table covered with a white tablecloth. The menu included Jewish-style fried artichokes, anchovies and endive, sauteed zucchini and other foods.

Amit Dabush, a proprietor of Ba’ Ghetto, which sits in the heart of the city’s old Jewish ghetto, told ADNKronos that the pope tasted everything they brought.

“He told me that he really liked our pistachio mousse,” Dabush was quoted as saying.

The Argentine delegation, headed by the pope’s longtime friend Rabbi Abraham Skorka, the rector of the Latin American Rabbinical Seminary, was at the Vatican to help mark the Roman Catholic Church’s annual Day of Judaism, which was initiated in the 1990s to foster Jewish-Catholic relations and help Catholics understand the Jewish roots of Christianity.

Latin American Jewish Congress Executive Director Claudio Epelman, who organized the meeting together with Skorka, said the pope expressed hope that the meeting “will help nurture the seeds we have planted together,” according to the World Jewish Congress. He also emphasized how he was looking forward “with great expectations” to his visit to Israel in May.

Epelman, the WJC official in charge of dialogue with the Catholic Church, said the pope intoned a psalm in Hebrew with the Jewish leaders at the end of the meal.

Skorka, who co-authored a book with Francis when the pope was the Buenos Aires archibishop Jorge Bergoglio, gave a lecture Thursday at the Pontifical Gregorian University reviewing Catholic-Jewish dialogue from a Latin American perspective.

The Day of Judaism generally is marked on Jan. 17 in Italy, Poland, Austria and the Netherlands. Some events took place Thursday because of Shabbat.

In Poland, events included daylong observances in the town of Sandomierz that featured an ecumenical service, a roundtable discussion, exhibitions and a theatrical performance.