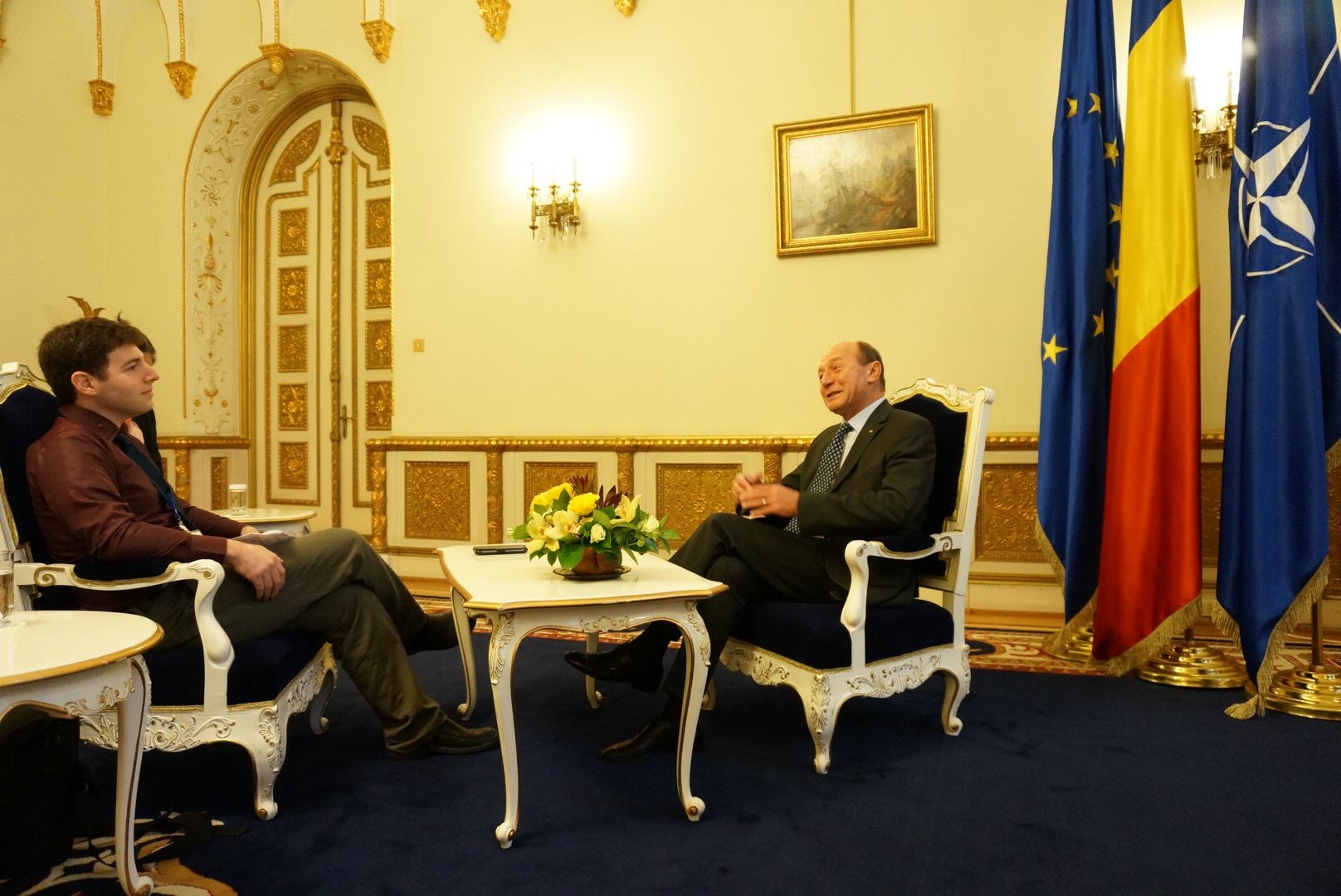 In December 1989, a childhood friend and neighbor from Haifa  posed a riddle to me that she had heard from her Bucharest-born mother.

“What’s the fastest way to get a nine-foot crocodile?” Alegra asked me that year, when we were both 8 years old.

I suggested raiding a crocodile farm, but Alegra said that according to her mom, all we needed to do was catch a lizard and leave it overnight at Nicolae Ceausescu’s presidential palace. “Presto, crocodile.”

The riddle was a political joke about rampant corruption under Romania’s communist dictator, whose lavish lifestyle ended that month in an execution and bloody revolution that served as the opening shot for the disintegration of the Soviet Empire. But in our childish minds, it was the recipe for the most awesome pet ever.

We never did find Ceausescu’s magical palace (the telephone company’s information desk operator proved uncooperative), but that quest left me expecting splendor when a taxi brought me, 25 years later, to an interview with Romanian President Traian Basescu at his office in Cotroceni Palace — Ceausescu’s former guesthouse.

Waiting to speak with the president ahead of his visit to Israel this week, I experienced another disillusionment. The entrance was a humble, green metal door leading to a frugal complex whose simple design betrayed its original function — a monastery. As for Basescu, his down-to-earth and friendly style was the antithesis of Ceausescu’s ways.

He spoke about his childhood friends in Israel (a doctor, an electrician and an actress who recently passed away) and I found myself telling him my own memories from that winter of 1989, when it seemed like the whole of Israel was glued to the television screen for news from Romania.

That’s not surprising considering that hundreds of protesters died in that historically significant revolution (and the fact that most Israelis had 1.5 channels to chose from). But for some 500,000 Romanian-speaking Israelis, including Alegra’s parents, the news was also personal. That personal connection, Basesecu said, is one of his main reasons for visiting Israel — home to the world’s second-largest Romanian-speaking diaspora, according to some estimates.

“In my visit, I want to show them [Israeli Romanian-speakers] that we stand by them,” Basescu said. “I find it especially moving that their Israeli-born children also speak Romanian.”

In Bucharest, Ceausescu’s name and shadow loom large this week — the revolution’s 25th anniversary — with constant reruns of footage from his ousting and execution. On Revolution Square, a heap of fresh wreaths stands shrouded in smoggy mist on the very spot where riots broke out on Dec. 21.

When I mention the tyrant’s name, Basescu chuckles and grimaces as if to say: “Here we go again.” He had served under Ceausescu as the Romanian merchant fleet’s chief envoy to Antwerp — a position that required high-security clearance and a nod from the dictator’s dreaded Securitate secret police. Basescu has said that his ties to Securitate were minimal and that he actually opposed the regime.

But he relaxes when he sees that my question is not about his history but rather the Ceausescu regime’s role in brokering peace between Israel and Arab leaders.

Ceausescu, in addition to being a corrupt despot, was also one of the Eastern Bloc’s most friendly leaders toward Israel. Steering his own course independent of Moscow’s anti-Israel line, Ceausescu helped facilitate the peace deal between Israel and Egypt and even hosted Israeli Prime Minister Menachem Begin in Bucharest during a secret visit in 1977. Ceausescu gained Israeli leaders’ trust by making Romania the only Eastern Bloc country to maintain diplomatic relations with Israel after 1967. Last year was the 65th anniversary of continuous diplomatic relations between the two countries.

At the same time, Ceausescu cultivated strong pro-Palestinian and pro-Arab credentials. Under him, Romania pursued an intimate relationship and military cooperation with Arab regimes — relations that benefited the country’s burgeoning plastics and oil refining industries. Ceausescu was a strong supporter of recognizing the first Palestinian declaration of independence in 1988, when the PLO was still widely regarded as a terrorist entity. He also called Yasser Arafat a good friend.

To this day, Romania has  strong ties both in the Arab world and with Israel, Basescu confirms. But he interrupts me to note that his country took “a step back” from its support for Palestinian unilateral actions — a reference to Romania’s abstention at the U.N. vote in 2011 on upgrading the Palestinian Authority’s status. Romania, he said, also supports Israel’s demand for Palestinian recognition of Israel as a Jewish state but at the same time advocates Israeli compromises on this and other issues.

As for resuming Ceausescu’s attempts to go down in history as a peacemaker, Basescu seems reluctant to pick up where Ceausescu left off.

Romania’s good relations with both parties make it a natural mediator, he hesitantly concurs, but it would act “only if we are asked. Otherwise, we wouldn’t like to interfere.”