Behind Japanese fascination with Anne Frank, a ‘kinship of victims’ 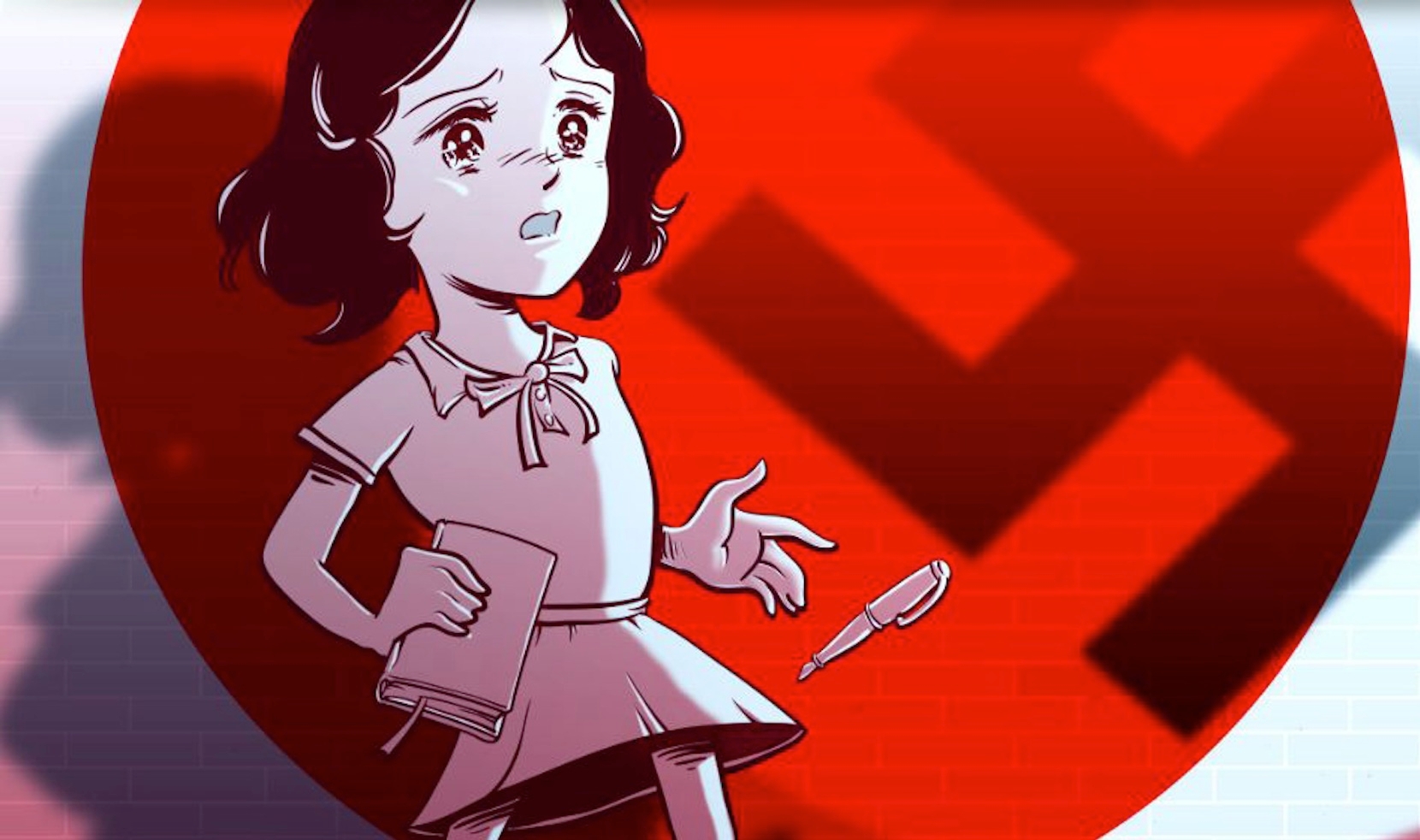 AMSTERDAM (JTA) — She speaks only Japanese and is not entirely sure what country she’s in, but 18-year-old Haruna Matsui is happy to stand in the rain for an hour with two friends to see the home of a person she has never met yet nonetheless considers her soul mate.

“We visited Paris and Brussels, so I just had to come here to see Anne’s home,” an excited Matsui told JTA last week outside Amsterdam’s Anne Frank House.

Matsui has read Japanese manga comic book adaptations of Frank’s diary several times and watched every anime cartoon film she could find about the teenage diarist who spent two years hiding in an Amsterdam attic before her arrest in 1944.

Frank’s story is so well known that dozens of nations are represented in the entry line of the museum established at her former hideout on Prinsengracht 263. Every year, more than a million people visit the museum, making it one of the Dutch capital’s most visited tourist destinations.

But interest in Anne Frank is particularly intense in Japan, where her story continues to reach new audiences through comic books, cartoons, museum exhibitions and educational initiatives.

For some Japanese, this is a source of pride. But researchers who have studied this fascination say it has a dark side, reflecting a tendency to focus on Japan’s victimhood during World War II while ignoring responsibility for atrocities committed by its troops who fought as allies of Nazi Germany.

“The Germans fought the French and English and the Jews in Europe, and then America and Japan had a war later,” she said hesitantly through a translator.

For many Europeans, Anne Frank is a potent symbol of the Holocaust and the dangers of racism. But the Japanese people tend to connect to her story for fundamentally different reasons, according to Alain Lewkowicz, a French Jewish journalist who wrote an elaborate iPad application,”Anne Frank in the Land of Manga,” about his investigation of the Anne Frank phenomenon in Japan. In January, a version of the work was published by the Franco-German television channel Arte.

“She symbolizes the ultimate World War II victim,” said Lewkowicz. “And that’s how most Japanese consider their own country because of the atomic bombs — a victim, never a perpetrator.”

Currently, approximately 30,000 Japanese tourists visit the Anne Frank House every year, 5,000 more than the annual number of Israeli visitors. That figure places Japan 13th in a list whose top 10 slots are all occupied by European and North American nations.

Japan has seen the publication of at least four popular manga comic books about Anne Frank and three animated films. The first Japanese translation of Anne Frank’s diary appeared in 1952, one year before it was first published in Hebrew.

“Basically, every Japanese person has read something about Anne Frank, which is even more amazing considering the shocking ignorance on history of many young Japanese today,” Lewkowicz said. “The older generation has read the book, and they buy the manga adaptation for their children.”

One place where Japanese children encounter Anne Frank’s story is the Holocaust Education Center at Fukuyama City, the only such institution in the region. Run by a Japanese reverend, Makoto Otsuka, the center has welcomed 150,000 schoolchildren since its establishment in 1995.

Located just 50 miles from where the American atomic bomb landed on Hiroshima in 1945, the center is home to a statue of Anne Frank, one of only two such statues found in Japan and the only ones in her memory in the Far East. The children also tour the center’s scale model of the Anne Frank House in Holland.

In 2011, the center received one of two cuttings sent to Japan from the chestnut tree Frank described in her diary. Japan is the only Asian country besides Israel with saplings from the tree. The one in Fukuyama is already nine feet tall, according to Otsuka, who spoke to JTA in Hebrew. He studied the language to improve his ability to study the Holocaust, he said.

“Anne Frank is a powerful symbol for peace in Japan,” Otsuka said. “That’s why her story resonates with so many Japanese, who have suffered the horrors of war.”

Otsuka began planning a Holocaust education center in 1971 after meeting Anne Frank’s father, Otto Frank, the only member of the family to survive the war.

“What I instantly saw in the man was how much love he had, despite everything he’d been through,” Otsuka said.

Introducing Japanese people to Anne Frank’s story was important to Otto Frank. His efforts in this regard may be part of the reason for the Japanese interest in his daughter, according to Ronald Leopold, director of Amsterdam’s Anne Frank House.

In his book, Lewkowicz juxtaposes Japan’s Anne Frank fascination with what he and many others consider Japan’s failure to fully acknowledge the actions of Japanese troops in areas they occupied in China and Korea.

“The Anne Frank-Japan connection is based on a kinship of victims,” Lewkowicz said. “The Japanese perceive themselves as such because of the atomic bombs dropped on Hiroshima and Nagasaki. They don’t think of the countless Anne Franks their troops created in Korea and China during the same years,”

In Korea, Japanese troops organized the rape of thousands of enslaved Korean women who were known as “comfort women.” They also perpetrated mass killings of Chinese civilians.

Japan apologized in 1993 to Korea and again in 1995 for having “caused tremendous damage and suffering to the people of many countries, particularly to those of Asian nations.” But many consider the apology insufficient and insincere, citing the absence of reference to war crimes and repeated visits by Japanese leaders to shrines honoring some of the worst perpetrators. Japanese Prime Minister Shinzo Abe’s visit last month to one such shrine sparked strongly worded condemnations from the Chinese government.

Otsuka says his museum is limited to the Holocaust and that other war crimes are not part of its scope. But he notes that the institution’s mission statement extended to “deepening the understandings of the period and helping to enhance awareness for world peace among young people.”

Despite this, Lewkowicz says that Otsuka is quietly working to raise awareness of the divisive issue of Japan’s wartime record.

“Don’t expect Otsuka to advocate adding the issue of Japanese war crimes to the national curriculum,” Lewkowicz said. “Japan is not ready. It may seem from the outside like an ultra-liberal society, but this is a false impression.”

Still, he said, “Slowly, bit by bit, Otsuka and other like-minded people are raising questions and telling people, also through the Anne Frank story, that some of what Japan did in those years is pretty much comparable.”