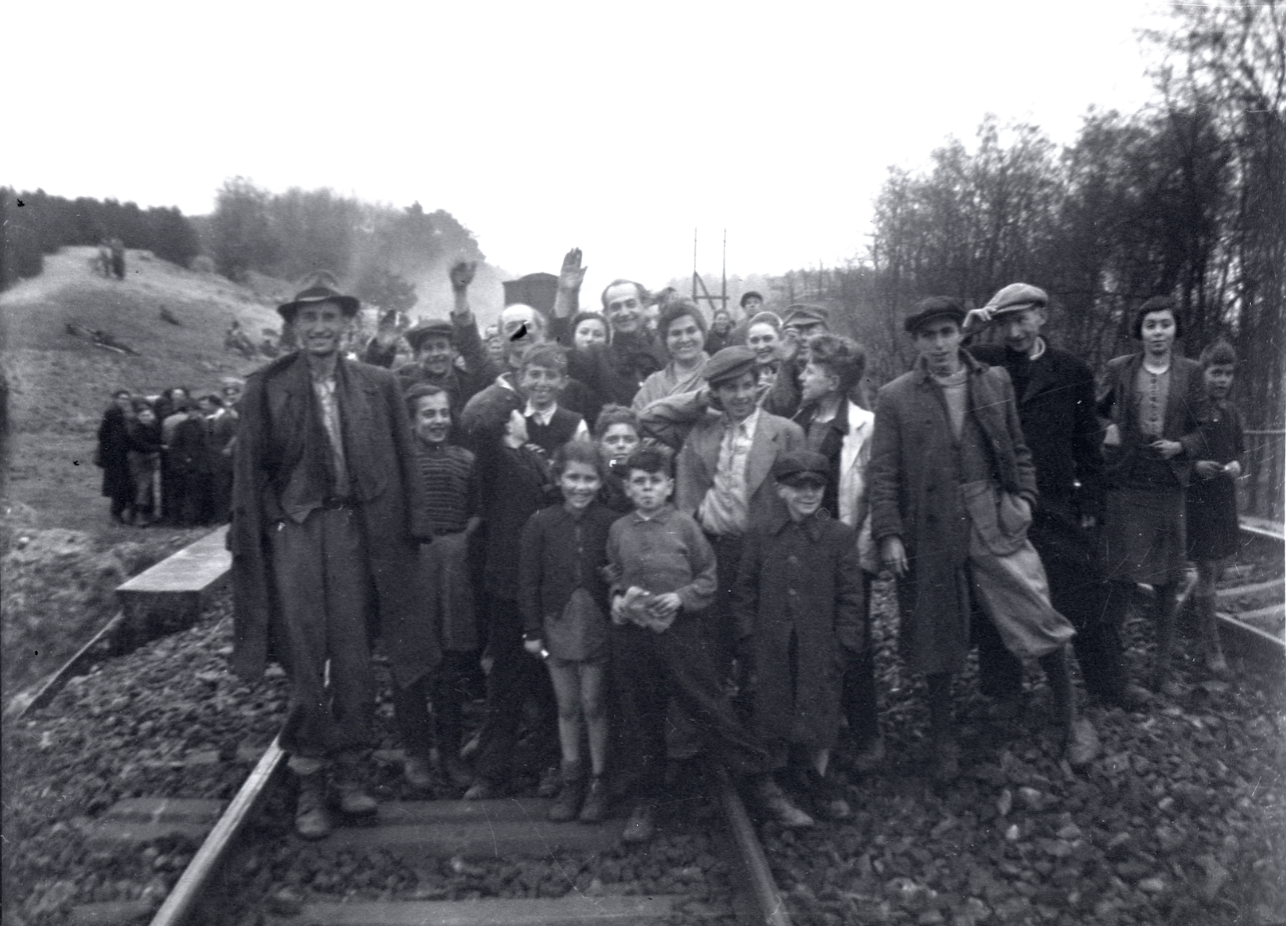 Former inmates who were transported by train from Bergen-Belsen were photographed in Farsleben, Germany, shortly after their liberation by U.S. troops on Apr. 13, 1945. (United States Holocaust Memorial Museum, courtesy of George Gross)
Advertisement

BALTIMORE (JTA) — Frank Towers, even at 96, still recalls the stench of the prisoner train when its doors were opened nearly seven decades ago.

“Not to be believed,” he said.

It was April 13, 1945, when the U.S. Army’s 30th Infantry Division, to which Towers belonged, freed prisoners from the Bergen-Belsen concentration camp in Germany who had been packed onto a train 40 to 50 cars long bound for Theresienstadt. They had been on the train for six days before it was stopped at a railway siding in Farsleben over a bureaucratic dispute.

After many of the train’s guards fled, some 200 Jews escaped. The escapees soon encountered a reconnaissance group from the 30th and led the soldiers to the train, where the remaining guards surrendered.

Once the doors were opened, the prisoners “just fell out,” said Towers, a first lieutenant and now a resident of Brooker, Fla., near Gainesville. “They were so happy to be liberated, they wanted to hug us — but we didn’t want them to touch us because we didn’t know what disease they were carrying.”

The post-Holocaust lives led by those whom Frank Towers, pictured here in 2006, and his U.S. Army comrades saved in 1945 are a source of gratification for him. (Courtesy Frank Towers)

Now Towers is determined to find the approximately 700 former prisoners he estimates could still be alive today from the 2,500 liberated by his unit. He says he has located 235. He’s had help from a woman in Israel who has located scores of survivors in Hungary — her father, a Budapest native, was among the saved.

About a decade ago, Towers established a website, www.30thinfantry.org, for the benefit of his cohort, and posted an appeal for the train survivors to contact him. A woman in Australia responded first, and “the whole thing snowballed” from there, he said.

On May 18, 2011, a reunion in Rehovot, Israel, drew 50 of the train’s passengers and more than 400 of their descendants. The survivors also flew in Towers and his son, Frank Jr., for the event.

“To be able to thank him for his service and what he did for our country and the world was so important to me,” said Col. Todd Cyril, a Pentagon official who as defense attache at the U.S. Embassy in Tel Aviv addressed the reunion attendees. “The train vignette is itself a great story, and what Frank has done to bring these people together is an even greater story.”

Towers has since met annually in Florida with smaller groups of survivors: in St. Petersburg in 2012, and the last two years in Boca Raton, including on Jan. 7. In February, some of the survivors plan to attend the 30th Division’s reunion in Savannah, Ga.

In Bergen-Belsen, the survivors had been held in the “star camp,” allowing them to wear their own clothes — albeit with the yellow Stars of David — rather than inmate uniforms.

Mostly they were foreign nationals, with many holding entry documents to prestate Israel and South American and other countries. They were held for future exchange with the Allies for German prisoners of war and lived in far better conditions than other camp inmates. Indeed, the trains from which they were rescued were passenger cars, not cattle cars.

Here’s what Towers and his unit did: They evacuated the liberated from the approaching battle zone.Towers, who at the time was serving as a liaison officer between the division’s headquarters and the regimental headquarters of the 743rd Tank Battalion, helped round up 50 trucks, ambulances and other military vehicles to relocate the freed prisoners.

The U.S. soldiers ordered local mayors to requisition housing, food and medical care for the survivors, said Steven Luckert, the U.S. Holocaust Memorial Museum’s curator of permanent exhibitions. Those requiring treatment, including for typhus, were taken to three buildings in Farsleben and nearby Hilersleiben that became ad-hoc hospitals. Approximately 20 prisoners had died on the train, Luckert said.

The convoy required several round trips to transport everyone late that afternoon and evening.

“We feel that Frank is a hero, but he says he’s not,” said Mattie Tugendhaft, 76, who was hidden during the Nazi occupation of his native Netherlands and whose wife, Myrna Reens, and father-in-law were liberated from the train. The Tugendhafts hosted the January gathering at their winter home. 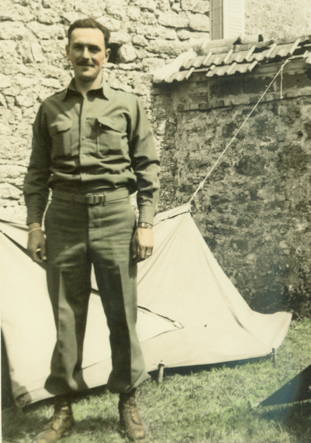 Eventually the survivors established new lives elsewhere and Towers returned to his hometown of St. Johnsbury, Vt. He attended college and in 1950 moved to Florida, where he worked as an office manager at the University of Florida.

The Tugendhafts became wealthy as owners of duty-free shops at Amsterdam’s Schipol Airport. Others freed from the train made their marks, too, like Warsaw native Micha Tomkiewicz, a physics professor at New York’s Brooklyn College.

Towers evinces pride relating the names of the Jews who became surgeons in Jerusalem and in London, and engineers, lawyers, teachers, businesspeople and housewives.

But a hint of shame accompanies his voice across the phone line, too.

“The whole thing has taught me to be more tolerant of people,” he said from his home. “In the past I was critical of Jews and other people, but it was not the right thing to do.”

Last April 11, the flag representing the 30th Infantry Division assumed a place of honor during the National Days of Remembrance ceremony, an annual event commemorating the Holocaust at the U.S. Capitol’s Rotunda. It was added to the 35 others after the U.S. Holocaust Memorial Museum in Washington and the U.S. Army Center for Military History determined in late 2012 that members of the division had liberated Holocaust survivors.

The flag, which now hangs at the museum, does not honor the heroism of Towers and his compatriots in Farsleben. Instead, the division is recognized for its liberation the day before of Weferlingen, a subcamp of the Buchenwald concentration camp in Germany.

According to Luckert, only divisions that liberated inmates in concentration camps qualify for the honor.

Towers is trying to find the U.S. soldiers from Farsleben; the drivers, medics and other staff in the military vehicles would’ve numbered at least 100, he thinks. So far, he’s been unsuccessful.

Two sergeants at Farsleben who attended past Florida reunions — George Gross, who photographed the group at the train tracks shortly after liberation, and Carrol Walsh, who went on to become a judge — have died.

Talking about his unit’s efforts in Farsleben, Towers said, “We were trained to fight a war. We weren’t trained to be humanitarians. But these people were dumped in our laps and we couldn’t just leave them.”

(Please email Hillel Kuttler at seekingkin@jta.org if you know the whereabouts of those who were liberated from the train at Farsleben on April 13, 1945. If you would like “Seeking Kin” to write about your search for long-lost relatives and friends, please include the principal facts and your contact information in a brief email. “Seeking Kin” is sponsored by Bryna Shuchat and Joshua Landes and family in loving memory of their mother and grandmother, Miriam Shuchat, a lifelong uniter of the Jewish people.)