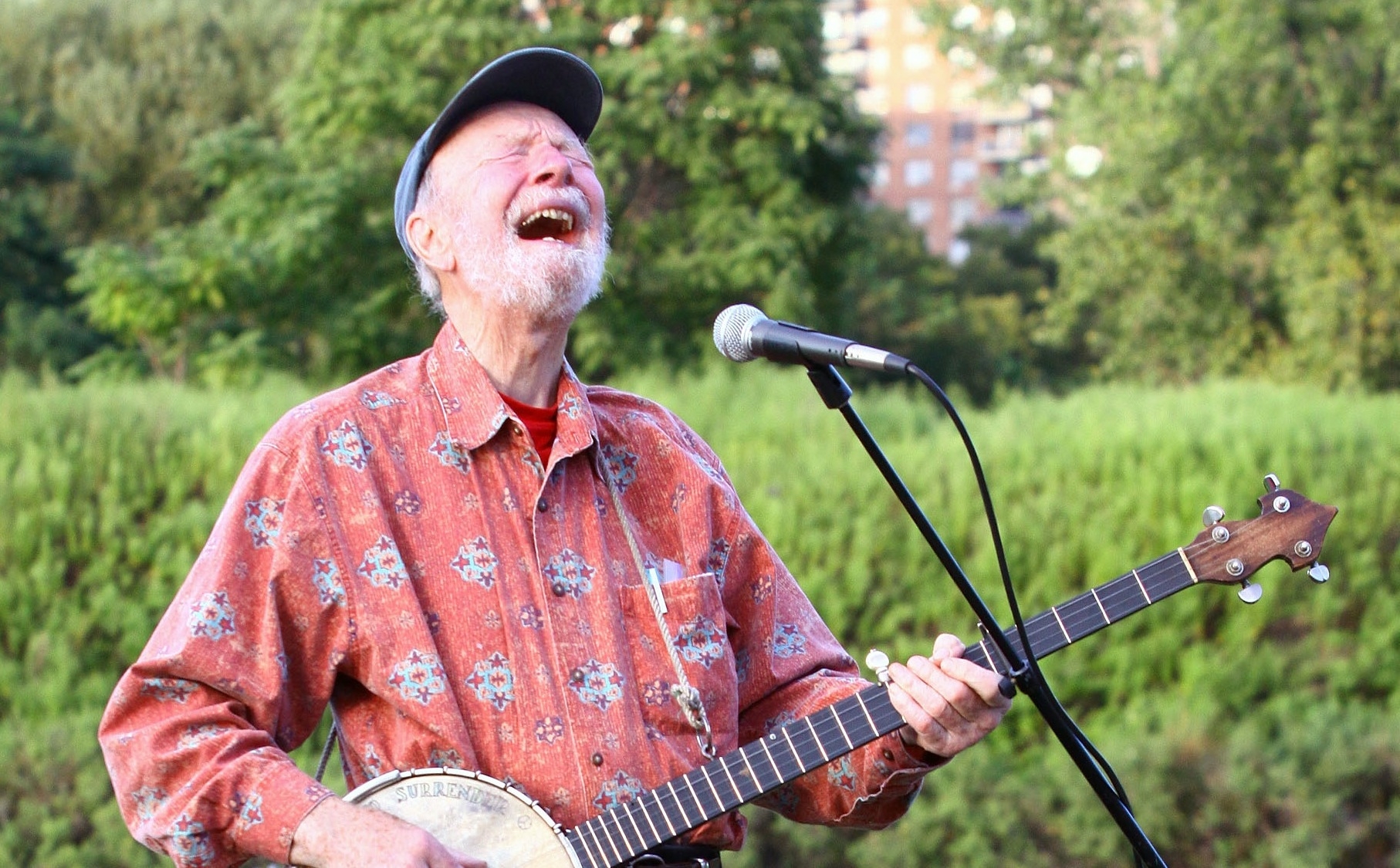 Today began on a sad note with news that Pete Seeger, a man for whom the modifier “legendary” seems hopelessly inadequate, had died in New York City at 94.

Unlike some of my friends who were weaned on Seeger’s music, I encountered the man only later. An image from Alec Wilkinson’s 2006 New Yorker profile in particular stands out: Seeger, then in his mid-80s, protesting the Iraq war on a snowy stretch of Route 9 near his home in Beacon, N.Y. He didn’t call in the press. He didn’t call in anyone. He just stood there, alone, cars passing and a freezing rain falling on his head, bearing a sign with a single word: Peace.

Nearly as much as the music he wrote and helped popularize, Seeger will be remembered for his leftist politics: He supported the labor and civil rights movements, was an unabashed communist (with a small “c”) and opposed America’s wars. He was blacklisted for being a party member in the 1940s, indicted for contempt of Congress and sentenced to a year in jail, though the conviction was overturned on appeal. But Seeger was never cowed, even as he grew frail. He performed with Bruce Springsteen at Barack Obama’s first inauguration in 2009 and, when the Occupy protests broke out in 2011, Seeger, supporting himself with two canes, joined a protest march of nearly 40 blocks in New York City.

Inevitably, such loyalties led Seeger to cross paths with Jewish activists over the years. Rabbi Michael Lerner, in the first of what surely will be many Jewish remembrances to come forth in the coming days, recalled when Seeger offered to perform at the first Tikkun conference in 1988. “Seeger understood that the kind of Judaism we espoused was rooted in the universalist and prophetic tradition that had led so many Jews to become deeply involved in the movements for peace and social justice – not the chauvinist nationalism that was becoming dominant in large sections of the organized Jewish community,” Lerner wrote.

Also inevitably, perhaps, Seeger was drawn into the increasingly vitriolic debate over Israel. Despite his longtime support for the Israeli Committee Against House Demolitions, and his disgust at what he once called “monstrous” Israeli military actions against Palestinians, Seeger declined to bow out of an online rally for peace in the Middle East, despite urgings from the BDS movement.

“My religion is that the world will not survive without dialogue,” Seeger told JTA’s Sue Fishkoff in 2010. “I would say to the Israelis and the Palestinians, if you think it’s terrible now, just think ahead 50 years to when the world blows itself up. It will get worse unless you learn how to turn the world around peacefully.”

Maybe it was his age and his familiarity with an Israel that preceded the occupation, but Seeger seemed capable of seeing beyond an Israel caricatured as just another outpost of Western imperialism. Seeger first visited Israel in 1964 and spent time on Israeli kibbutzim — just the sort of collective communal enterprises he loved. He performed Israeli folk tunes with the Weavers in the 1950s as part of the larger folk revival he was helping to champion. And just two years ago, he recorded a video for the Jewish retreat center Isabella Freedman that recalls the three questions posed by the Jewish sage Hillel (amazingly, it’s been viewed less than 500 times).

In 2011, after a report that Seeger supported a boycott of Israel, he acknowledged to JTA that he “probably said” he supported such a measure, but that his views on the Israeli-Palestinian conflict were evolving. My “opinions waver with each piece of information,” Seeger said.

We don’t live in a political culture with much tolerance for wavering opinions, regardless of one’s politics. At the risk of reading too much into that  single comment, I’d like to think Seeger was a link to an earlier moment — as he was in so many ways — a time before changing one’s mind was considered high treason in certain quarters, when folks still sat around campfires with banjos and moonshine.