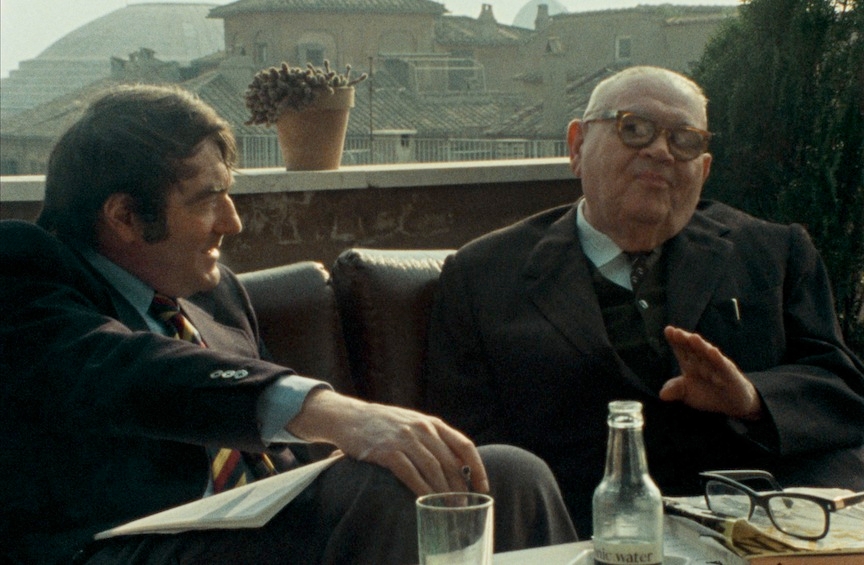 Filmmaker Claude Lanzmann speaks with Benjamin Murmelstein, the subject of "The Last of the Unjust." (Courtesy of Cohen Media Group)
Advertisement

LOS ANGELES (JTA) — When French director Claude Lanzmann finished filming and editing his eight-hour epic “Shoah” in 1985, he still had stashed away nearly 11 hours of interviews with one man.

The man was Benjamin Murmelstein, the last president of the Jewish council, or Judenrat, in the Theresienstadt (Terezin) ghetto in Czechoslovakia and the only Nazi-installed “elder of the Jews” not killed during the Holocaust.

Compressed into the 3 1/2-hour documentary “The Last of the Unjust,” the interviews conducted in 1975 reveal a man then 70 years old who in Lanzmann’s estimation was highly intelligent, ironic, did not lie, was hard on others and on himself, and was blessed with total recall.

Murmelstein also displayed a sardonic wit, upending the title of Andre Schwarz-Bart’s novel “The Last of the Just” into the self-designated “Last of the Unjust,” which was adopted by Lanzmann for his film title.

The roles played by the members of the Jewish councils in the Nazi-controlled ghettos of Lvov, Warsaw, Vilna and Lodz are still the stuff of debates, books and plays.

Were these men stooges who did the dirty work of the Nazis to save their skins and enjoy the illusion of power? Or were they brave, well-meaning individuals who sacrificed themselves in the hope of saving at least some of their fellow Jews?

Murmelstein comes across as having had a mixture of motives, hopes and ambitions, though apparently more intelligent and self-aware than other ghetto leaders.

A Viennese rabbi and deputy to the Jewish community president, Murmelstein first met Adolf Eichmann in 1938, after the Nazi takeover of Austria.

Eichmann ordered Murmelstein to organize the forced emigration of Austrian Jews, and even his detractors acknowledge Murmelstein’s role in helping more than 120,000 of Austria’s 200,000 Jews flee the country.

Over the next seven years, until the end of the war, the Viennese rabbi and the Nazi Holocaust organizer met and sparred again and again. Murmelstein may have gotten to know Eichmann better than any other Jewish leader.

As such, Murmelstein demolishes philosopher Hannah Arendt’s portrait of Eichmann as a mere bureaucrat carrying out orders and the personification of “the banality of evil.”

In reality, Murmelstein testifies, Eichmann was a “demon” — a thoroughly corrupt one at that — who also was a fanatic and violent anti-Semite, participating directly in the burning of Vienna’s synagogues during Kristallnacht.

Murmelstein lambastes Eichmann’s 1961 trial in Jerusalem as “a poor trial run by ignorant people,” and approvingly quotes a newspaper critic on “the banality of Mrs. Arendt’s own conclusions.”

While obviously trying to cast his own role as ghetto elder in as favorable a light as possible, Murmelstein, under sharp questioning, acknowledges his own shortcomings.

He owns up to enjoying a sense of power and, oddly, even of adventure, as well as to a reputation among his Jewish “subjects” as tough and mean.

But mainly he sees himself as a pragmatist among the self-deluded, noting, “If a surgeon starts crying during an operation, the patient dies.”

In general, Murmelstein holds a high opinion of his importance, arguing, “I had to save myself to save the ghetto.”

After the war Murmelstein, who held a diplomatic passport from the International Committee of the Red Cross, easily could have fled Europe. Instead he chose to remain in Czechoslovakia and stand trial on allegations of collaborating with the Nazis.

“The Last of the Unjust” is, above all, a fascinating examination of the human condition in extremis, especially in clinging to hope when every escape seems barred.

For example, when Eichmann and Nazi propaganda initially painted Theresienstadt as a lovely spa that lucky Jews could enjoy if they turned over all their money to the “Eichmann Fund,” 40,000 elderly Jews eagerly signed on.

In a lengthy interview with Lanzmann featured in the film’s production notes, the filmmaker mentions that even Murmelstein, who had no illusions about Nazi cruelty and trickery, “said he didn’t know about the gas chambers and that’s absolutely true.”

“In Theresienstadt, the Jews were afraid of deportation to the East, but they couldn’t imagine the reality of death in the gas chambers,” Lanzmann said.

Lanzmann illustrates the desperate longing for survival in the ghetto by quoting one inmate, who said, “He who wants to live is condemned to hope.”

And in words all latter-day analysts of Jewish action and inaction during the Holocaust might take to heart, the film concludes, “The elders of the Jews can be condemned, but they cannot be judged.”