From Jewish sleepaway camp to the big-time courts, Larry Brown leads the way 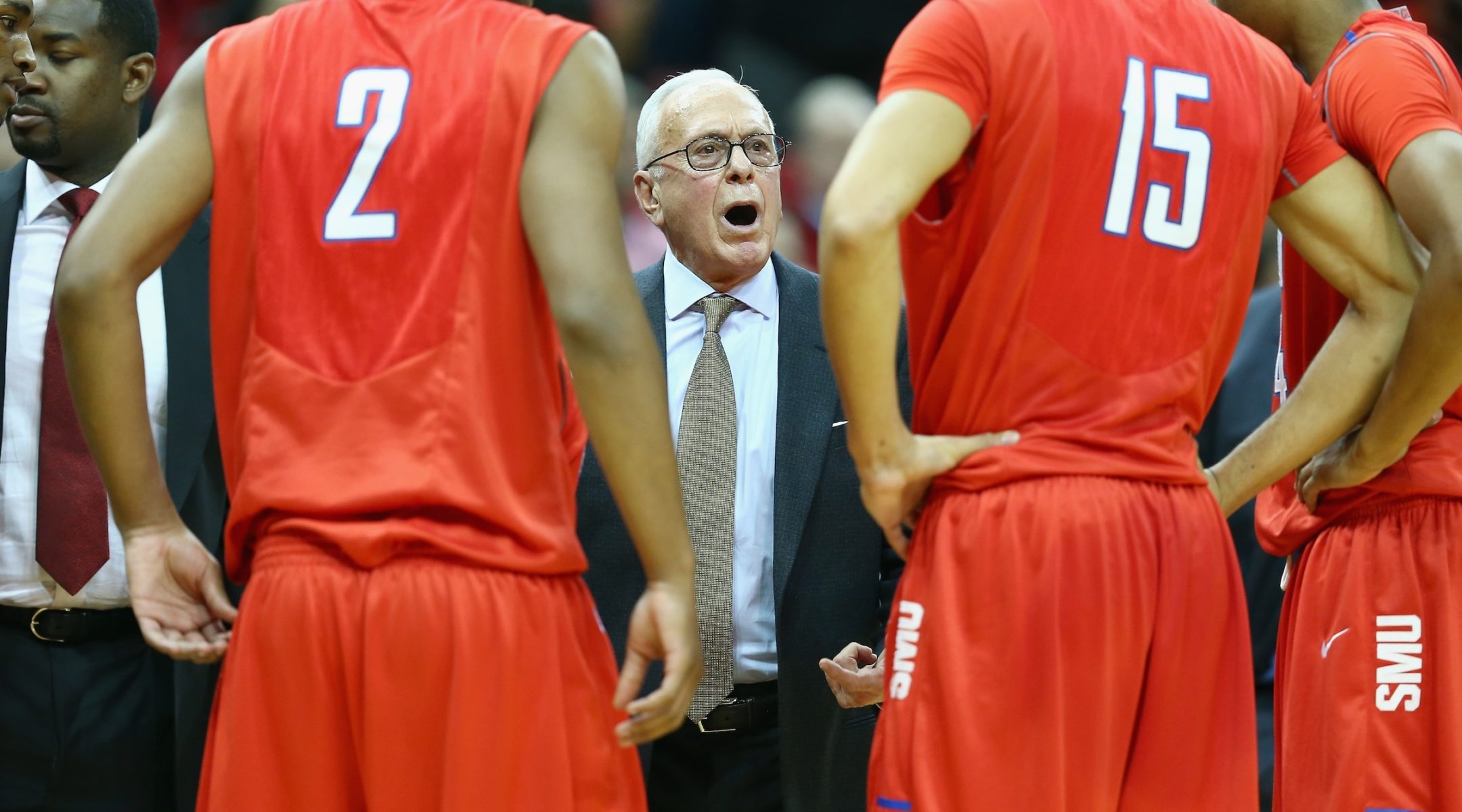 The day being Purim, Brown was asked whom he was masquerading as.

“I’m dressed like a coach,” the straitlaced Brown responded.

Not an NCAA Tournament coach, as it turned out this season.

Brown had hoped later that day to figuratively fit his team for tuxedos for the Big Dance, but his squad’s solid 24-9 record wasn’t enough for the selection committee to proffer an invitation.

Missing March Madness surely disappointed Brown, 73, a member of the Naismith Memorial Basketball Hall of Fame and several Jewish shrines for coaching success in the NBA and in college. He has guided nine NBA teams and two college programs before SMU, often turning around forlorn clubs quickly.

Despite the NCAA snub, that’s what he’s done at SMU. Brown brought a program absent from NCAA Tournament play for 21 years to a Top 25 ranking and what many college hoops observers expected to be a bid in just his second season in Dallas.

The Mustangs, however, will be playing in the postseason: The National Invitational Tournament made SMU a top seed in one of its four brackets. For Wednesday’s opening-round game, the Mustangs will play at home against the University of California, Irvine.

Home for Brown early on was Brooklyn, N.Y., and the Long Island suburb of Long Beach, where he and older brother Herb embarked on their careers as players and then coaches. Their maternal grandfather, Israel Hittleman, an immigrant from Russia, owned a bakery there where the whole family worked.

His grandfather was an observant Jew. The Browns attended a Conservative synagogue and the boys had bar mitzvahs.

“I wouldn’t consider myself really religious, but I was always proud I was Jewish and never hesitated to let everybody know,” Brown said in an interview this week with JTA.

His earliest leadership role was as a counselor at Camp Keeyumah, a Jewish sleepaway camp in Pennsylvania’s Pocono Mountains. The brothers were hired by head counselor Roy Illowit, who had become a father figure after their dad, Milton, died of a heart attack at age 43, when Larry was 7 and Herb was 12. (Their mother, Ann, died three years ago at 105.)

“I went to the camp, I worked at the camp, I became a counselor at the camp,” Brown said. “I always knew I wanted to coach and teach because the people who had the greatest influence on me, beside my family, were my coaches.”

One of his campers was Tony Kornheiser, who remembers Brown from the late 1950s for his hoops prowess — and for leading the boys’ raids on the girls’ bunks.

“He made sure to take care of his kids,” Kornheiser, the veteran co-host of ESPN’s “Pardon the Interruption,” said with a laugh about his former counselor. “He was a God-like figure in the summer-camp circuit. Everyone adored him and tried to walk like him.”

Brown, a point guard at Long Beach High School on the way to starring for the University of North Carolina and several clubs in the now-defunct American Basketball Association, dominated Poconos basketball games against teams representing other camps, Kornheiser recalled.

A few years later, in 1961, Brown led the United States to the gold medal at the Maccabiah Games in Israel. He has turned down offers to coach in the Maccabiah and has not been back to Israel.

In 1997 and 2005, it was Herb Brown who coached the U.S. squad to Maccabiah bronze and, in 2001, to gold. Herb served as his brother’s assistant coach with the Indiana Pacers, Detroit Pistons, Philadelphia 76ers and Charlotte Bobcats.

In Philadelphia, where they lived together, Brown was on the verge of quitting the 76ers out of frustration with star guard Allen Iverson, Herb recalled. But in a two-hour conversation one night, he persuaded Brown to stay the course.

His brother is “very introspective, sensitive and a perfectionist,” Herb Brown said by telephone from his home in Portland, Ore.

Kornheiser, who has covered sports for newspapers and as a broadcaster since the early 1970s, said, “There was nobody who didn’t like Larry — until Isiah Thomas.”

That was in 2006, when Brown was fired after coaching the Knicks to a 23-59 record in his lone season with the team and replaced by Thomas, then New York’s president and general manager.

Brown at his next stop piloted the Bobcats to the playoffs but was fired by another legendary ex-player, team owner Michael Jordan.

They were two blips in an otherwise stellar career with nearly as many successes as stations. Despite often turning have-nots into haves, Brown didn’t stay anywhere long. His maximum stint was six years in Philadelphia, where the 76ers reached the NBA Finals in the 2000-01 season led by Iverson, the league’s scoring champion and Most Valuable Player.

In Philadelphia, Brown acquired Eric Snow and inserted him into the starting lineup after the underutilized point guard was hardly seatless in Seattle. Snow now works as SMU’s director of player development.

Brown has “one of the best basketball minds I’ve ever been around,” said Brooklyn Nets general manager Billy King, whom Brown brought to Philadelphia as an executive.

The Philadelphia tenure for Brown is remembered in part for his tempestuous relationship with Iverson, who ranted against the coach’s questioning of his practice habits.

But perhaps befitting a man reflecting on a brilliant career — he is the only coach to win an NCAA title (1987-88 with Kansas) and an NBA crown (2003-04 with the Pistons), besides capturing a gold medal playing in the 1964 Olympics and a bronze medal as head coach in 2004 — Brown has come around on Iverson.

“Now that I’m away from him, I realize what an unbelievable, positive effect he’s had on my life,” Brown said. “When you coach a guy for six years, you’re going to have ups and downs, especially when you’re a demanding guy like me and realize what a great talent he is, and you want to bring out the best in him.”

Before this season, Iverson addressed SMU’s players – “as emotional a day” as the team’s had all year, Brown said.

“I want to see him get back in the game in some capacity,” Brown said of Iverson. “I think that we need him to be working for the Sixers. That would be a great thing.”

Brown’s return to coaching has worked out well for himself and SMU, where his son, L.J., a freshman, has dad for a roommate.

Dad shows no signs of slowing down. Another former player, Kiki Vandeweghe, now an NBA vice president, says he wouldn’t be a surprised to see Brown still working in basketball at 80.

“He said to me once, ‘Maybe I’ll teach high school,’ ” Vandeweghe recalled. “The love of the game always shines through. It’s the essence of every great teacher.”