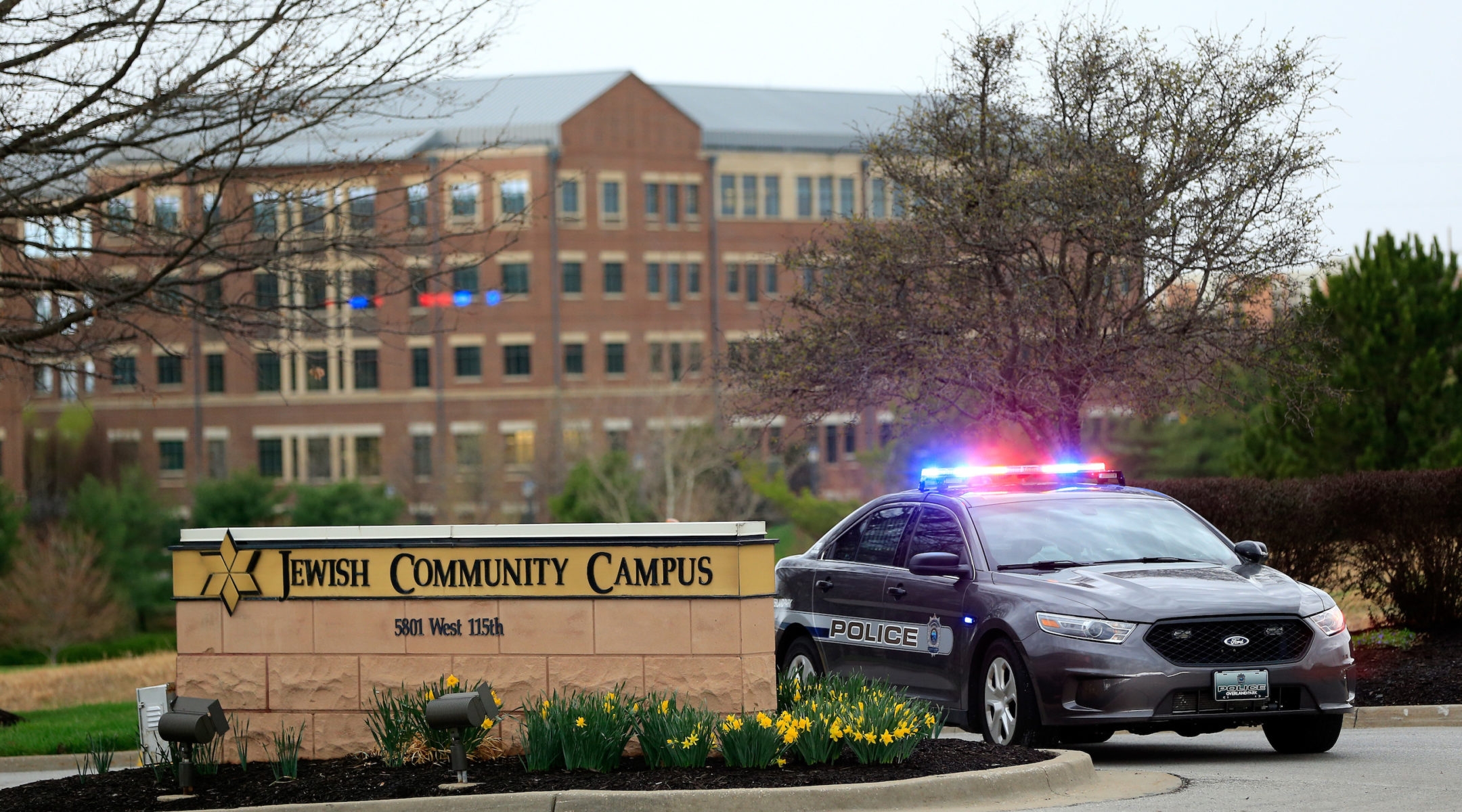 A police car is seen at the entrance of the Jewish Community Campus in Overland Park, Kan., after deadly shootings there and at a nearby assisted-living facility, April 13, 2014. (Jamie Squire/Getty Images)
Advertisement

OVERLAND PARK, Kan. (JTA) — Every Friday at noon, my 2-year-old daughter and I rush through the doors of the Jewish Community Center of Greater Kansas City to meet my father for lunch.

We are usually late, and the JCC’s Heritage Center, catering to active seniors (and their preschool-aged guests), is only our first stop. Vivien refuses to leave until she and zayde have had a run of the entire building. At the White Theater, she chatters on about the time she saw “Hershel and the Hanukkah Goblins.” She reads books about Purim and Passover in the library, points out the most colorful paintings hung in the atrium and chases soccer balls around the gym until it is time to go.

Only when I promise we can always return does she let us carry her back through those large glass doors, the ones now shattered by shotgun blasts.

It’s a surreal image, those scarred doors, no easier to believe for having seen it on TV than the fact that two lives were taken in the parking lot outside.

After all, I grew up here, too. This is the place my parents first left me to fend for myself as a day camper, where I made an awkward preteen stage debut, worked summer after summer as a counselor, later helped produce a film festival, ran my first meeting and now continue to volunteer, work, work out (occasionally) and build some of the strongest relationships I’ve known.

My experience differs only in the details from those of thousands of other Kansas Citians. In the hours since the shootings of Sunday afternoon, friends — some who moved away years ago, leaving few ties behind — have written, called, posted on Facebook. One commented that it felt like an attack “inside my childhood home.”

Much has been made of the JCC as a safe place, but this is not our haven, it’s our habitat, a campus full of organizations serving those in all stages and walks of life. There is a preschool, a K-12 day school and the offices of Jewish federation and multiple other philanthropic, vocational, educational and family-service agencies, as well as the respected theater and popular fitness and sports facilities.

Nearly anyone involved with the Jewish community, even tangentially, has a regular reason to stop by — for a meeting, a preschool pick-up, a rehearsal, a lecture, a volunteer assignment, a swim lesson, a Zumba class — or knows someone who does.

A mile away, Village Shalom, the second site targeted by 73-year-old white supremacist Frazier Glenn Cross, is another community hub. It is an assisted-living facility for seniors but also houses a kosher cafe, an art gallery, a social hall for community lectures and events, and a chapel where our family’s synagogue holds weekday minyanim (and where we celebrated our son’s brit milah two months ago).

These campuses are the physical manifestation of a remarkably cohesive Jewish community. Perhaps more so than in larger communities, Kansas City Jews hold tight across political and denominational lines.

But neither is the community an island. The Jewish Community Campus serves visitors of all religions and backgrounds; in the perfect phrasing of my friend Josh Stein, who works there, it is “the living room of our community, open and welcoming to everyone.”

In the moments before the shooter struck, an audience was gathering for a performance of “To Kill a Mockingbird,” a stage adaptation of Harper Lee’s call to tolerance. Across the hall, auditions were underway for KC SuperStar, an “American Idol”-style competition open to students from high schools across the region.

The two victims from the JCC parking lot would be identified as Dr. William Lewis Corporon and his grandson, 14-year-old Reat Griffin Underwood, who was there to audition. Both were members of United Methodist Church of the Resurrection. Many in the Jewish community count its members among our neighbors and friends. Pastor Adam Hamilton has built close relationships with local Jewish leaders, including some who participated in a church trip to Israel.

The third victim, Terri LaManno, a Catholic mother of two, was killed in the parking lot of Village Shalom, where she had come to visit her mother, a resident at the home.

The victims may not have been Jews — as the murderer likely intended — but they were members of our community all the same.

All year, the JCC has been celebrating its centennial — a time for looking back and retelling, something Jews know how to do. But throughout the building, the black-and-white and faded-color photos from the first 100 years are dwarfed by the banners bearing the center’s slogan: “100 More.”

We must deal with the necessary reactions: profound sadness, anger, some fear, heightened security and insecurity. But in the hours after the lockdown was lifted, people rushed in, not away — clergy, counselors, off-duty JCC staff — arriving to see how they could help.

As Pesach begins, this may now be the moment that separates the center’s last century from its next, “l’dor v’dor.” Let all who are hungry come and eat. There will be more life, and the doors to the community will only open wider.