After his hunger strike, Alan Gross’ backers ramp up calls for U.S. action 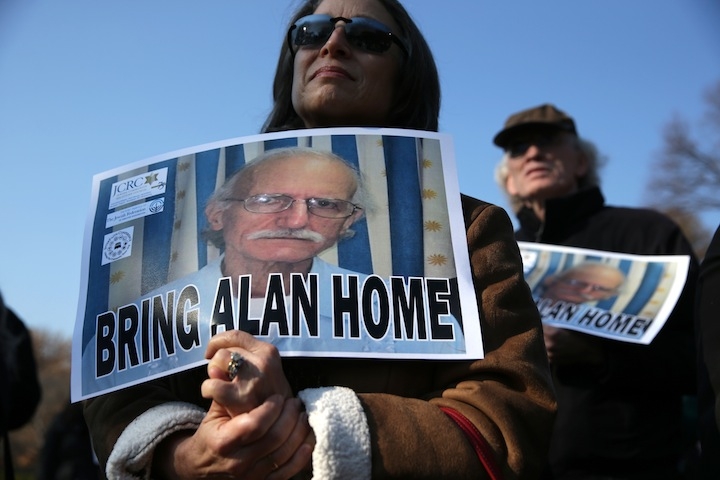 Supporters of Alan Gross, who is currently being held in a Cuban prison, rally outside the White House on Dec. 3, 2013. (Alex Wong/Getty Images)
Advertisement

WASHINGTON (JTA) — Alan Gross did not warn his family he was launching a hunger strike, but hearing the news, they understood why: The U.S. government subcontractor languishing in a Cuban prison feels forgotten.

Gross,  a 64-year-old Jewish father of two from Potomac, Md., is currently serving a 15-year sentence in Cuba for “crimes against the state.” He was arrested in December 2009 while on a mission to hook up Cuba’s small Jewish community with the Internet. The company he was working for had a contract with the U.S. Agency for International Development.

“We’re asking that the U.S. government do whatever it takes,” Jill Zuckman, a spokeswoman for the Gross family, told JTA in an April 11 interview, the day Gross ended his fast after eight days. “This situation is not going to be resolved unless President Obama takes a personal interest in it.”

The intervention of his mother, Evelyn Gross, who turned 92 on Tuesday, led Gross to quit his hunger strike. In a statement, Gross said he was fed up with the approach of both Cuba and the United States.

“My protest fast is suspended as of today, although there will be further protests to come,” Gross said in a statement. “There will be no cause for further intense protest when both governments show more concern for human beings and less malice and derision toward each other.”

Efforts to win Gross’ release have faced diplomatic and political obstacles. Cuba wants the release of its citizens who have been convicted of espionage, while anti-communist Cuban-Americans have been resistant to compromise.

It all leaves Gross and his advocates feeling ignored and seeking new ways of finding attention. Increasingly, Jewish groups have been criticizing the U.S. government’s handling of Gross’ case.

Quoting from the statement by Gross announcing his hunger strike, the Conference of Presidents of Major American Jewish Organizations, the foreign policy umbrella body for U.S. Jewish groups, issued a similar pox-on-both-houses admonition.

“We believe that his case has not been given the urgent attention it warrants,” said the statement signed by Malcolm Hoenlein, the body’s executive vice president, and Robert Sugarman, its chairman. “The U.S. government has a special responsibility to Mr. Gross who is fasting to ‘object to mistruths, deceptions and inaction by the governments …’ and to call attention to ‘the lack of any reasonable or valid effort to resolve this shameful ordeal.’ ”

He launched his hunger strike on April 3, leaving a message with his lawyer, Scott Gilbert, the next day.

“We didn’t know that he was going to go on a hunger strike,” Zuckman said. “We’ve all been very worried about him. He wasn’t in great health to begin with to not eat any solid foods for over a week.”

A final straw for Gross was the revelation that USAID had launched a bid — after his arrest — to open a Twitter-like channel of communications to promote democracy and anti-regime sentiment among Cubans. The initiative ended in 2011 due to a lack of funding.

“Once Alan was arrested, it is shocking that USAID would imperil his safety even further by running a covert operation in Cuba,” Gilbert said in a statement. Gross had been subcontracting for a contractor that was working for USAID.

“USAID has made one absurdly bad decision after another,” the attorney said. “Running this program is contrary to everything we have been told by high-level representatives of the Obama Administration about USAID’s activities in Cuba.”

U.S. Secretary of State John Kerry told the Senate on April 3 that efforts have been launched to free Gross but added he could not elaborate.

“We have a number of efforts underway, which I would be happy to talk to you about privately,” Kerry said in response to a question from Sen. Marco Rubio (R-Fla.), whose parents were Cuban immigrants. “But we are very, very focused on trying to get Alan Gross out of there. His treatment is inhumane. And he is wrongfully imprisoned.”

Gross’ family will not say what specifically they believe the Obama administration could do to free Gross. His wife, Judy, in 2011 had advocated humanitarian gestures for the so-called Cuban Five — Cubans who were convicted in the United States of spying offenses in 2001.

Since then, the Obama administration has released two of the five before their sentences were complete for good behavior. One of the two was allowed, while still on parole, to visit an ailing family member in Cuba.

Cuban officials have not explicitly offered Gross for the Cuban Five, but they have said it would be a natural trade. The Miami Herald on April 9 quoted Josefina Vidal, the Cuban official in charge of U.S. relations as saying that meeting the “humanitarian concerns” regarding the three spies still in prison could “resolve” Gross’ case.

The still-imprisoned Cubans had received longer sentences than the other two. One is serving a life term because of his involvement in the Cuban Air Force’s fatal 1996 downing of two planes belonging to a Cuban activist group. Four Americans were killed in the attack.

The Cuban government’s interests section here did not respond to a request for comment, but in the past its officials have said that the situations of Gross and the Cuban Five are not comparable. They noted that Gross was allowed to see his wife while in prison and the Cuban Five were not.

In its statement, the Presidents Conference said Gross is “being held hostage to apparently unrelated demands and actions.”

In an interview, Hoenlein did not explain who was making the demands or actions. But Hoenlein said the Obama administration has lifted some travel restrictions on Cuba, and he suggested refraining from further U.S. gestures toward Cuba pending a resolution of Gross’ situation.

“The feeling is there hasn’t been any serious negotiation,” he said. “We are doing things with the Cubans, we made concessions with Cubans. Maybe we have to hold back.”

Obama has eased some policies, including travel and money-transfer restrictions, but has held back on other rollbacks, in part because of the influence of American critics of Cuba.

A delicate issue for Gross’ advocates in the Jewish community is that some of the fiercest opponents of accommodation with Cuba are also some of Israel’s most prominent congressional allies, including Sen. Robert Menendez (D-N.J.), the chairman of the Senate’s Foreign Relations Committee.

Menendez, considered key by pro-Israel groups in overseeing the current nuclear talks with Iran headed by the United States, has expressed support for the Cuban Twitter program that triggered Gross’ hunger strike.

“The whole purpose of our democracy programs, whether it be in Cuba or other parts of the world, is in part to create a free flow of information in closed societies,” Menendez told The Associated Press, which uncovered the program’s existence.