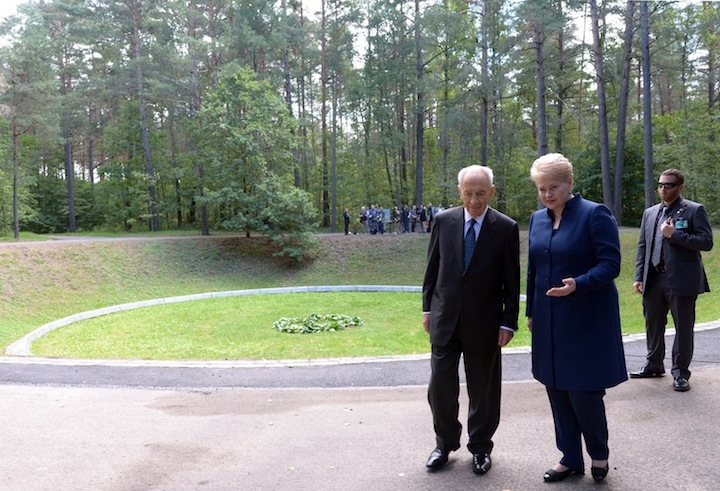 Israeli President Shimon Peres and Lithuania's President Dalia Grybauskaite attend a remembrance ceremony at Paneriai Memorial on August 01, 2013 near Vilnius, Lithuania. Around 100,000 victims, more than half of them Jewish, were murdered at the site by the Germans and Lithuanian groups during World War II. (Moshe Milner/Israeli Government Press Office via Getty Images)
Advertisement

NEW YORK (JTA) — When a 2009 Holocaust-era assets conference concluded with a landmark statement of principles on Holocaust restitution, many restitution advocates had high hopes that a corner had been turned in the struggle for survivor justice.

The Terezin Declaration, which had the support of 46 countries participating in the conference in the Czech Republic, outlined a set of goals for property restitution. It recognized the advancing age of Holocaust survivors and the imperative of delivering them aid and justice in their final years.

“Participating States urge that every effort be made to rectify the consequences of wrongful property seizures, such as confiscations, forced sales and sales under duress of property, which were part of the persecution of these innocent people and groups, the vast majority of whom died heirless,” the June 2009 declaration stated.

But five years on, progress on securing restitution has been painstakingly slow.

The lingering Euro Zone crisis has hampered efforts to get Eastern European countries to pass restitution legislation. The Terezin Declaration, while verbally bold, did not require any concrete commitments — or even the signatures of those countries present. Poland, the only European country occupied by the Nazis that has not enacted substantial private property restitution, did not even bother to show up for a follow-up conference in 2012.

In fact, since 2009, Lithuania has been the only country to enact substantial restitution legislation: a $53 million package announced in 2011, to be paid out over 10 years for communal property seized during the Holocaust.

“Most countries resist having to engage in restitution or compensation for lost property,” said Douglas Davidson, the U.S. State Department’s special envoy for Holocaust restitution issues.

The week before Passover, Davidson was in Zagreb with Jewish restitution leaders negotiating with Croatian government officials. Croatia is one of the few countries that negotiators say is holding serious restitution talks and where a deal is conceivable in the foreseeable future.

“They want to do it, they know they should do it, but their economy is in disastrous shape and by their reckoning it would cost them 1 billion euros to compensate for property that was nationalized by the communist regime in Yugoslavia after the war,” Davidson said.

In a bid to add some fuel to the campaign for restitution in countries that are dragging their feet, the World Jewish Restitution Organization is mounting a new effort to drum up public and political pressure within the European Union. In February, the group helped orchestrate a letter by 50 British parliamentarians to Polish Prime Minister Donald Tusk pressing him on restitution.

“Unfortunately, Poland stands out in its failure to fulfill — or even recognize — its responsibility to victims,” said the letter, whose primary signatory was Baroness Ruth Deech. A Jewish member of the House of Lords, Deech had grandparents on both sides of her family who owned substantial property in Poland.

“Poland has a responsibility to elderly Holocaust survivors, their heirs and other victims to return property which was seized by the Nazis or subsequently nationalized by the Communist regimes,” the letter said. “Democratic Poland continues unjustly to benefit from the victims’ private property. Many of these victims and their heirs — both Jews and non-Jews — are British citizens.”

This month, British Foreign Secretary William Hague lent his support to the campaign.

“Europe is a partner that is as important and in some cases more important than the United States,” said Gideon Taylor, WJRO’s chairman of operations. “Making this a multilateral issue is going to be the way we need to go if we really want to use the last few years survivors are with us.”

During the heyday of Holocaust restitution legislation in the 1990s, the newly independent countries of Central and Eastern Europe viewed restitution as a way to curry favor with the West and improve their chances of gaining admission to NATO. Holocaust restitution often came up in U.S. Senate hearings on NATO membership, and it was during that era that several major restitution agreements were reached. The opening of state archives after the fall of the Iron Curtain helped keep a spotlight on the issue.

When Germany reunified in 1990, the restitution of East German properties once owned by Jews was a condition of the nation’s reunification agreement, and since then more than $3 billion in assets have been restituted.

Today, the main leverage for negotiators is the demand for justice, as well as the urgency of getting deals done before the last generation of survivors dies out.

“We had some leverage at a certain point in this process — the issue of countries coming into NATO or the EU — but that was accomplished in the 1990s or the early part of the 2000s,” said Daniel Mariaschin, executive vice president of B’nai B’rith International, which is a member of the WJRO. “What we really are dependent on now is the moral imperative of the case, or the goodwill or lack of it by the governments involved, and on WJRO’s persuasive abilities. That’s a pretty challenging task.”

The task is made more difficult by the pace and duration of negotiations. Stretched out in many cases over a decade or more, negotiations wax and wane while governments come and go, recessions and austerity budgets take hold, and in some places, rising nationalist sentiment makes any kind of deal more difficult.

Even for governments that recognize their responsibility to return property seized from Jews, the idea of transferring local assets to Jews overseas is seen as a political liability. For that reason, even some of the countries that have passed restitution or compensation legislation bar non-citizens or those living outside the country from benefiting.

Greg Schneider, the executive vice president of the Claims Conference, which deals primarily with restitution related to Germany and Austria, says the European public needs to understand that it’s not an issue of giving something away but of restoring assets to their rightful owners.

“The thing about property restitution is it’s not a gift, it’s not a favor,” Schneider said. “It’s giving back property that was stolen.”

For the most part, European governments have accepted that principle, negotiators say. The issue is what is economically and political feasible. There’s a lot on the table. Depending on the country, negotiators may focus on communal, private or heirless property. Many countries have some kind of restitution legislation on the books, but the many loopholes, restrictions and implementation problems must be worked out.

Countries that bear responsibility for perpetrating the Holocaust also have the issue of compensation for suffering.

In Lithuania, where nearly all of the country’s prewar Jewish population of 200,000 was murdered — often with the complicity of local Lithuanians — the 2011 deal on restitution also provided about $1 million to fund symbolic one-time $600 compensation payments to 1,775 Lithuanian Jewish Holocaust victims worldwide.

The big money — about $53 million — stayed in Lithuania, designated for “religious, cultural, health care, sports, educational, and scientific purposes of Lithuanian Jews in Lithuania.” The sum amounted to about one-third of the estimated value of lost Jewish communal property (private property restitution was not part of the negotiations).

Negotiators say the next country to pass substantial restitution legislation may be Serbia, where restitution is seen as part of its campaign to complete entry into the European Union.

It is widely agreed that the worst offender on restitution issues is Poland, where some 3 million Jews lived before the war and which has not enacted any private property restitution laws.

Taylor, a former chief of the Claims Conference, says Poland should not be put off by the magnitude of possible claims.

“Poland, Hungary and Romania are probably the most important countries because they were the biggest communities before the war,” he said. “Our position is that what we’re looking for in these countries is a system and process, not a lump sum. Sometimes you end up with a settlement. We want a process that’s fair.”