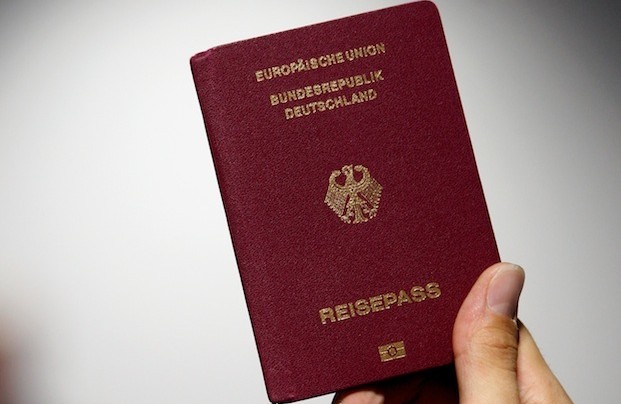 SOUTHAMPTON, N.Y. (JTA) — Four years ago, I applied to re-obtain German citizenship on behalf of my son and myself.

Neither of us was born in Germany. I was born in sunny California and my son on Long Island.

But I had learned that under the German Constitution, “Former German citizens who between Jan. 30, 1933 and May 8, 1945 were deprived of their citizenship on political, racial or religious ground and their descendants shall on application have their citizenship restored.”

I called my father immediately. “You can be restored to Germany.”

My father’s voice, usually a rich baritone, gently whispered, “No, Gaby, I can’t.”

Dad lived in California; if he was anything he was a citizen of that state, a reinvention, a man who flouted convention. Married five times, he refused to be tied down, even to a wife.

I understood my father’s position. Born in 1919, he grew up in the predominately Catholic city of Munich in a wealthy, secular Jewish family. His father was an ophthalmologist and, although far back there had been a rabbi in the family, my grandfather Selz was an atheist. Judaism was their cultural identity. Collecting art and antiques, the family was part of a social circle full of scientists and intellectuals.

But by 1936, everything had changed. Forbidden to attend school, my father joined the Werkleute (Working People), a Zionist youth group. Forced to wear an armband with the Star of David, he started attending synagogue for the first time in his life.

When his father’s business was shut down and the family possessions sold off to survive, his parents decided to send him to America. Boarding the boat Europa, he carried only a small suitcase. He was 17 and alone. Hoping that the conflict would blow over soon, not envisioning the slaughter that would follow, his parents chose to stay behind.

For two years my father heard little from his family. Then word finally came from Europe. His parents had barely escaped Kristallnacht, the Night of Broken Glass.

Before he’d been restricted to only treating Jewish patients, my ophthalmologist grandfather regularly examined the eyes of nuns at the local convent for free. Early on the day of November 9, before the riots, deportation and deaths began, two nuns, hearing what was planned for the city’s Jews, visited my grandfather’s office on the pretext of an eye complaint.

Disguising my grandfather in a nun’s habit, they’d spirited him out of danger and into hiding in the convent until my grandmother could be fetched. Passage was booked, first on the train to England, then on the voyage over submarine-infested waters to join my father in America.

While cousins and aunts hid in closets or perished in concentration camps, my father’s immediate family escaped. Still, my father vowed he would never allow himself to be labeled or pigeonholed again.

With each passing year, as my father became more assimilated, he gradually abandoned what little religious inclination he’d gravitated toward before he left Germany. He mistrusted doctrines and “isms” of any kind, from socialism to realism.

But I was not my father. My mother was Greek Orthodox, my father a secular Jew. I darted in and out of churches and temples, yearning for something absolute to define me.

Then, in my late 30s, my son was born. I did not want him to flounder as I had. I wanted give him a cultural legacy that would connect him back not just to my father’s Germanness, but also to his secular Judaism.

The process of re-naturalization involved filling out a time-consuming stack of paperwork. It went smoothly until I came to this question: What was my religion? For two days, I couldn’t fill in the space with a blank box beside it. My father had always preached, “Watch out. Don’t allow anyone to brand you.”

I looked at my father’s papers from his American naturalization in 1943. Nowhere did it ask him about his religion. Then, curious, I examined the current U.S. application for naturalization. It asked, among other things, if the applicant was ever a member of the Nazi party, or if he or she was ever persecuted for his/her religion. It did not ask the applicant to identify religious beliefs.

But my re-naturalization form was a reversal of the Reich Law Gazette from 1935 that had aimed to isolate Jews racially and socially, and that had allowed for confiscation of Jewish property if said Jew was living aboard. It seemed preposterous: The very condition that had endangered my family, that had rendered them helpless, taken their property and forced them to flee, was the condition for re-entry.

I understood the legal reasoning, but my struggle was emotional.

“You could say you’re agnostic or atheist,” my father suggested.

“Your people were many things,” my father said emphatically. “One of those things was Jewish.”

And that was the point. Up until that moment, I had never been pushed to declare myself either. One piece of my identity that I could pass onto my son was this fraction. In the blank spot, I filled in: half-Jewish.

This step did not take me backward toward my father’s past, as I had imagined, but forward, toward my own.

These days, when I look at my son, sometimes I see his father’s face, sometimes my own. When he tells me he is a “free spirit,” I hear his grandfather in him. My son is, among other things, a citizen of both the United States of America and the Federal Republic of Germany. He identifies himself as one-quarter Jewish.

We are both, partially, restored.

(Gabrielle Selz’s memoir, “Unstill Life: A Daughter’s Memoir of Art and Love in the Age of Abstraction,” is forthcoming from W.W. Norton in May. She has published in More Magazine, The New York Times and Newsday, among other places. She writes regularly on art for The Huffington Post.)