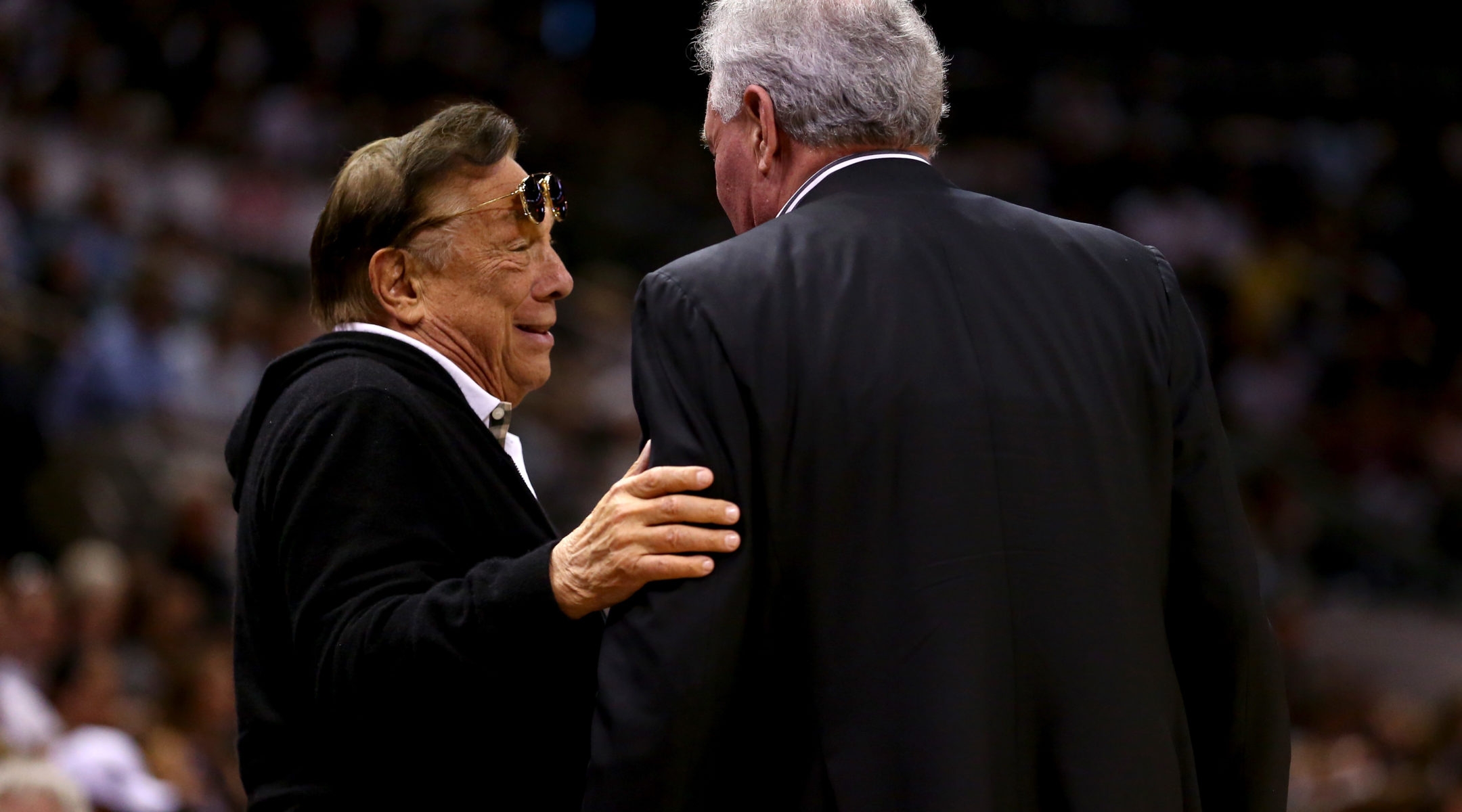 Donald Sterling of Los Angeles Clippers talks with Peter Holt, owner of the San Antonio Spurs, during Game One of the Western Conference Finals of the 2013 NBA Playoffs on May 19, 2013 in San Antonio, Texas. (Ronald Martinez/Getty Images)
Advertisement

“If the National Basketball Association’s investigation reveals that Mr. Sterling in fact made these racist and intolerant statements, we expect and anticipate a swift and forceful response,” Foxman said in a statement. “We applaud those within and outside the NBA who have already spoken out on this issue. It is reassuring and affirming to know that such flagrant racism is so widely regarded as out of bounds.”

TMZ published a 10-minute recording of the racist rant on its website late Friday, saying the recording was a conversation between Sterling and his model girlfriend, V. Stiviano.

Sterling, the son of Jewish immigrant parents, allegedly tells his girlfriend, who is black and Mexican, not to be seen in public with black people or to post photographs of herself with black people on Instagram. He also tells her not to bring black people, including Magic Johnson, to his team’s basketball games.

Johnson and others in the NBA community, notably Michael Jordan, the former Chicago Bulls superstar and now an owner of the Charlotte Bobcats, have slammed Sterling’s remarks, as did President Obama in Malaysia over the weekend.

On Sunday, an extended audio from the conversation was released by the website Deadspin in which the man identified as Sterling is heard explaining that his views reflect the way the world works. As evidence, he says that black Jews in Israel “are just treated like dogs.”

His girlfriend is heard countering that as a Jew, Sterling should know better than to advocate discrimination, and she cites the Holocaust as an example of where racism can lead.

“In Los Angeles, the most diverse major city in the country, we take as a point of pride that our leaders — in business, in government and in the community — embrace and accept this diversity without bias or bigotry,” Susskind said in a statement. “Both are suggested in the shocking language attributed to Mr. Sterling. We hope he disavows both the language and the sentiment behind it.”

The American Jewish Committee condemned the remarks and called on the NBA to take appropriate action against Sterling.

“Donald Sterling’s callous remarks regarding African Americans are a painful reminder that, 60 years after the landmark Supreme Court decision in Brown vs. Board of Education, and 50 years after the enactment of the Civil Rights Act, there is still work to be done,” said AJC Executive Director David Harris. “And that someone so deeply involved in the NBA, which exemplifies the racial tapestry of our country, would think this way is all the more striking.”

NBA Commissioner Adam Silver, who also is Jewish, called the racist remarks attributed to Sterling “truly offensive and disturbing.” He said in a statement Sunday that the league will move “extraordinarily quickly” in its investigation.

The Los Angeles chapter of the National Association for the Advancement of Colored People, which had been scheduled to honor Sterling with a lifetime achievement award on Sunday, said via Twitter that it had rescinded the award.

Sterling, a lawyer and real estate owner born Donald Tokowitz, bought the Clippers in 1981. He currently is the longest-tenured owner in the NBA.