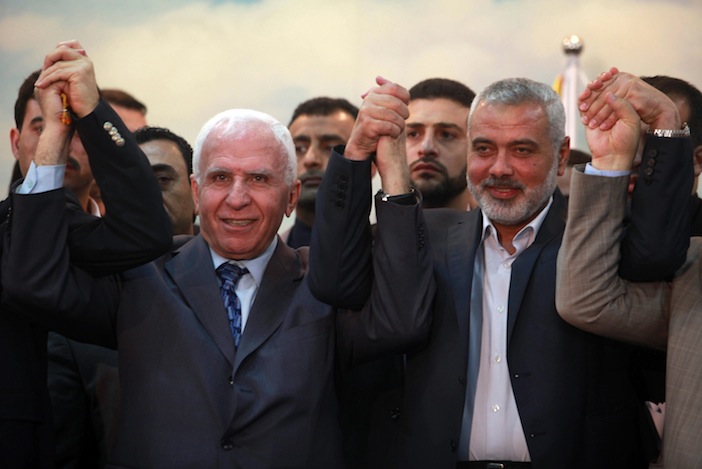 WASHINGTON (JTA) — The best move for the Obama administration on the Middle East peace front may be to take a few steps back.

That’s what some observers are advising in the wake of the collapse of Israeli-Palestinian negotiations.

The Palestinian unity talks mean that President Obama and U.S. Secretary of State John Kerry have little choice but to to take a wait-and-see approach, according to the Israeli and American experts interviewed by JTA.

“The time has to be taken to see if the Fatah and Hamas reunification takes place,” said Michael Oren, who until last year served as Israel’s ambassador to Washington. “If it does succeed, we will be in one place. If it does not, we will be in a different place.”

The agreement signed last week between the Fatah-led Palestine Liberation Organization and Hamas sets a five-week deadline to come up with an interim government that in turn would set the stage for new elections.

“If they are seriously interested to see what of value could emerge to reconstitute the process, then all they can do is monitor,” Aaron David Miller, a veteran U.S. peace negotiator and now a vice president at the Wilson Center think tank, said of the Obama administration.

Obama himself suggested that a break from the process may be necessary.

“There may come a point at which there just needs to be a pause and both sides need to look at the alternatives,” he said from South Korea, a leg on his Asia trip.

Israel suspended talks with the Palestinians in the wake of the agreement. The Israeli government insisted that Palestinian Authority President Mahmoud Abbas could not negotiate with Israel while uniting with Hamas, which is committed to Israel’s destruction.

The integration of Hamas into Palestinian governance would be problematic, the experts agreed, although there were differences as to what would be acceptable outcomes and what outcomes would further undercut the prospects for returning to the peace process.

“Right now, all they can do is sit back and watch and see if there emerges a Palestinian technocrat government,” said Yossi Alpher, an Israeli strategic affairs analyst and adviser on peace talks to past Israeli governments.

Alpher said that a government of technocrats without direct Hamas involvement but with its backing would allow the Obama administration to pressure Israel to get back into talks. He noted that Israel technically is negotiating not with the Palestinian Authority but with the PLO, which under this formula would not have a Hamas component.

Miller said such arrangements would amount to a “winks and nods” arrangement that Israeli Prime Minister Benjamin Netanyahu would likely be loath to accept.

“I don’t know to what degree this Israeli government is willing to accommodate itself to winks and nods,” he said.

The Palestinians say they are still committed to negotiations with Israel, which were supposed to have ended on Tuesday with an agreement of some sort. But Israeli officials say that a Hamas role in the Palestinian government in any capacity is unacceptable.

“It does not matter to Israel if the Palestinians establish a technocratic government to serve as a front that will say all the right things,” Ron Dermer, Israel’s U.S. ambassador, said Monday in an address here to the Anti-Defamation League’s annual National Leadership Summit. “If Hamas is in the back office, Israel will not be at the negotiating table.”

Jonathan Schanzer, a vice president at the Foundation for Defense of Democracies who has written extensively on the Palestinian Authority, said it would be critical for the United States to encourage and maintain lower-level Israeli-Palestinian contacts, particularly in terms of security cooperation.

“There’s been good security cooperation,” Schanzer said. “There’s an understanding on both sides about how each society functions, there’s a modus vivendi. I would expect things to drop back down to that level.”

Ziad Asali, the president of the American Task Force on Palestine, also said that maintaining low-level contacts was critical, if only to better prepare the ground for the resumption of talks.

“One of the problems they never paid much attention to is Plan B, what to do if people fail,” he said. “What should be Plan B is improving conditions for Palestinians on the ground.”

Asali said it includes plans already underway to increase outside investment in the Palestinian economy and facilitating new elections, which have not taken place since 2006.

Heather Hurlburt, a senior fellow for national security at Human Rights First, said Kerry ultimately could make good on a threat he made in a private meeting over the weekend to hand the sides a framework agreement and leave it up to them to take the next steps.

“There is a set of parameters an American leader could present publicly to both sides and say, ‘We know this is hard for you to swallow, how about your people vote on them,’ ” she said.

Oren said if anything, the Obama administration should avoid delving into far-reaching recommendations, arguing that its tough line on Israeli settlement building had undercut the process.

“One thing that can be done is stop making statements that increasingly narrow the latitude of negotiators on both sides,” the former Israeli envoy said.

“By equating longstanding Jewish neighborhoods in Jerusalem like Gilo with outlying settlements like Yizhar, Washington is putting immense pressure, is limiting the latitude of Prime Minister Netanyahu to show greater flexibility. It strengthens the extreme right wing in Israel. It also limits Mahmoud Abbas’ latitude because he can’t be less Palestinian than the White House.”