Jordan Elist transforms recyclables into food for the needy 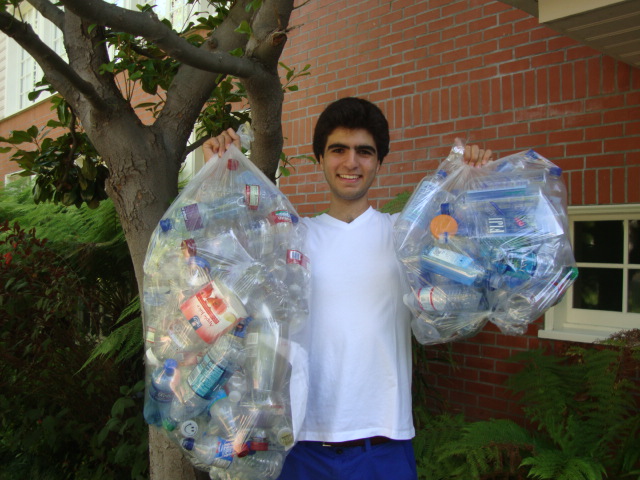 WASHINGTON (JTA) — As a seventh-grader at the Harvard-Westlake School in Los Angeles, Jordan Elist spent many hours fulfilling his community service requirement by volunteering at local food banks.

The issue of food insecurity became “very dear to my heart,” he said. “Being hungry is something that anyone can relate to.”

So when the food banks ran low on donations, Elist came up with a plan to help.

He launched the nonprofit Save a Bottle, Save a Life, which raises money to purchase food by recycling bottles and cans. Elist distributed special bags and enlisted his friends, classmates and neighbors to collect the recyclables.

Going house to house, eventually they reached several hundred homes within their community. In its six years, Elist said, Save a Bottle, Save a Life has raised approximately $30,000 by collecting an estimated 450,000 bottles and cans.

Now a freshman at the University of Southern California majoring in business administration and international relations, Elist, 19, was awarded the DillerTeen Tikkun Olam Award in 2013 for his work with his nonprofit. The award, he said, motivated him to expand the organization and seek out additional partnerships with local businesses, including Starbucks.

“Recycling was a cool way to get money on the side and help out the environment, but with such a simple act we made a big impact,” Elist said.

Elist shared with JTA the visionaries with whom he’d like to have lunch, his thoughts on teens doing community service and what Jewish dish he likes best.

JTA: If you could have lunch or coffee with anyone and tell him or her about Save a Bottle, Save a Life, who would it be?

Elist: Warren Buffett and Bill Gates. They are both visionaries in their professional and humanitarian fields. I’d tell them about the vision that I have to grow Save a Bottle, Save a Life, like starting a partnership with the Bill & Melinda Gates Foundation.

Definitely Sinai Akiba and Sinai Temple for instilling in me, at an early age, the Jewish values of tikkun olam and tzedakah. My high school, Harvard-Westlake, for putting tremendous emphasis on community service.

What advice would you give to other teens trying to fulfill their school’s community service requirement?

First, community service shouldn’t be a requirement; it should be something you do out of sheer enjoyment. When you see a need, act to make a difference. One individual can make a tremendous difference.

Can you share with us a meaningful Jewish experience that you have had?

This past summer when I went to Israel with Birthright. It was the first time I went [to Israel] without my family and with a group of complete strangers. It was transformative and very inspiring.

Do you have a favorite Jewish food?