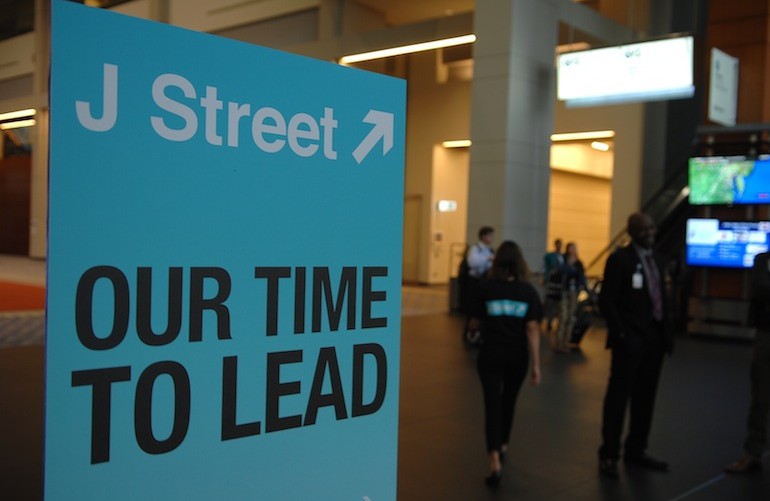 WASHINGTON (JTA) — J Street wasn’t welcomed under the umbrella, but it hasn’t been left out alone in the rain.

J Street’s failed effort to join the Conference of Presidents of Major American Jewish Organizations showed that many in the Jewish community still regard the dovish Israel policy group as beyond the pale.

In a secret ballot Wednesday, 22 member groups of the Jewish community’s foreign policy umbrella body voted against admitting J Street, with 17 in favor, three abstentions and eight not present.

At the same time, the membership bid elicited an unprecedented show of support from leading Jewish groups, some of which had previously clashed with J Street or kept it at arm’s length. The Presidents Conference’s rejection of J Street elicited loud protests from prominent Jewish groups and calls for reform of the conference.

“J Street kind of won the popular vote,” said Rabbi Julie Schonfeld, executive vice chairman of the Conservative movement’s Rabbinical Assembly. “The folks who represent actually millions of Jews voted to say we believe the tent is big enough and the table wide enough to continue to grow and to have dialogue.”

Groups that had called for J Street’s admission to the Presidents Conference included the Anti-Defamation League, arms of the Reform and Conservative movements, and the Jewish Council for Public Affairs, the community’s domestic policy umbrella, among others.

J Street has had a complicated relationship with the rest of the organized Jewish community, simultaneously seeking acceptance while also dishing out criticism of other groups.

J Street, which describes itself as “pro-Israel, pro-peace,” has criticized Israeli government policies and called for U.S. pressure on Jerusalem, as well as the Palestinians. J Street has also backed the Obama administration’s opposition to additional sanctions on Iran while negotiations are taking place.

Some of the groups supporting J Street’s membership bid said that they did necessarily agree with its policy positions but felt that it represented a segment of the community and should therefore be included.

Groups voting against J Street said that its actions did not merit admission.

Farley Weiss, the president of National Council of Young Israel, said that bringing in J Street would render meaningless the Presidents Conference’s mission of presenting a unified Jewish voice to the government. He noted that J Street lobbies Congress and that its positions often were opposed to those of the American Israel Public Affairs Committee, the pro-Israel lobbying powerhouse.

“They would go to Congress and say, ‘We’re critical of Israel and we’re members of the Conference of Presidents,’” Weiss said of J Street.

According to participants, the debate at the Presidents Conference boardroom on Wednesday evening was civil, with contributions by past chairmen of the conference, both for and against admitting J Street. Participants said that no one’s mind appeared changed by the debate.

The rejection prompted calls from some Presidents Conference constituent groups for an overhaul of the body.

Before ascending to the URJ’s helm, Jacobs was a member of J Street’s Rabbinic Cabinet.

Other major groups, including the Conservative movement’s Rabbinical Assembly and the Anti-Defamation League, also were calling for an overhaul.

“The Conference of Presidents has 50 or so organizations, each one has one vote, the majority of those organizations are quite tiny,” Schonfeld said. “The fact that J Street did not pass today’s vote is reflective of structural anomalies of the conference.”

Smaller members of the conference with similar outlooks to J Street, including Ameinu and Americans for Peace Now, also called for reforms. APN said it would “weigh its options” regarding its relationship with the conference.

A source close to the Presidents Conference said that given the secret ballot it was not clear that J Street’s rejection was driven by the smaller groups and noted that many of the membership bid’s backers were also small.

The source said that previous attempts to change the voting system to take into consideration the various sizes of the constituent groups failed in part because there was disagreement on what criteria should determine the proportional weight of a member organization.

The expressions of support for J Street’s bid contrast with the cool reception the group often received in its early years. Most major Jewish groups kept away from its first national conference in 2009. Rabbi Eric Yoffie, Jacobs’ predecessor at the URJ, agreed to speak, but much of his speech criticized J Street for not backing Israel’s war with Hamas in Gaza earlier that year.

Since then, more major groups have participated in J Street conferences as attendees and speakers.

The growing warmth is in part the result of J Street advocating for Israel to other liberals. JCPA officials have said that J Street proved critical in defeating divestment motions targeting Israel that were being considered by left-leaning mainline Protestant churches.

Opponents of J Street’s bid said they were influenced by the group’s willingness to invite to its events supporters of the boycott, divestment and sanctions movement, though J Street opposes BDS.

J Street’s founder and president, Jeremy Ben-Ami, told JTA that his group would continue to engage with those with opposing views.

“The whole point of debate is to actively engage with the people who disagree with you,” he said.

But the Zionist Organization of America’s national president, Morton Klein, said that some viewpoints, such as support for BDS, do not deserve a Jewish platform.

“To give them a podium so that others can hear their arguments, no, that gives them legitimacy and allows them the chance to convince other people,” he said.

Ben-Ami said he was saddened by the vote.

But after it was rejected by the Presidents Conference, J Street quickly went on the offensive against the conference and its vice-president, Malcolm Hoenlein.

“Dear Malcolm,” J Street said in a letter posted on its website for which it is seeking signatories. “Thank you for finally making it clear that the Conference of Presidents is not representative of the voice of the Jewish community. We recognize the need for an open and honest conversation on Israel in the United States. We appreciate you being honest. Now we’ll work on the openness.”

Representatives of various conference members said that Hoenlein appeared to keep out of the process.

The ADL’s national director, Abraham Foxman, advocated for admitting J Street despite his disagreements with the group.

“They infuriate me,” he said.

Foxman said that J Street had undermined its own cause by criticizing other Israel supporters and emphasizing its differences from the communal consensus.

He pointed to a defense posted on the J Street website of Secretary of State John Kerry’s recent warning that absent a peace deal, Israel could become an apartheid state. Kerry was strongly criticized by Jewish groups for the comment, and he later said that his use of the word “apartheid” was inappropriate.

“Look what they did, right before the election, defending Kerry when Kerry would not defend himself,” Foxman said.

But whether he liked J Street was beside the point, Foxman said.

“We’re checking the tzitzis of those who want to celebrate Israel,” he said, using an expression that describes overly intrusive inspections of Jewish devotion. “We’re doing tzitzis checks of how deep is their love. That’s a troubling development.”