Sirens and solidarity on Yom Hazikaron 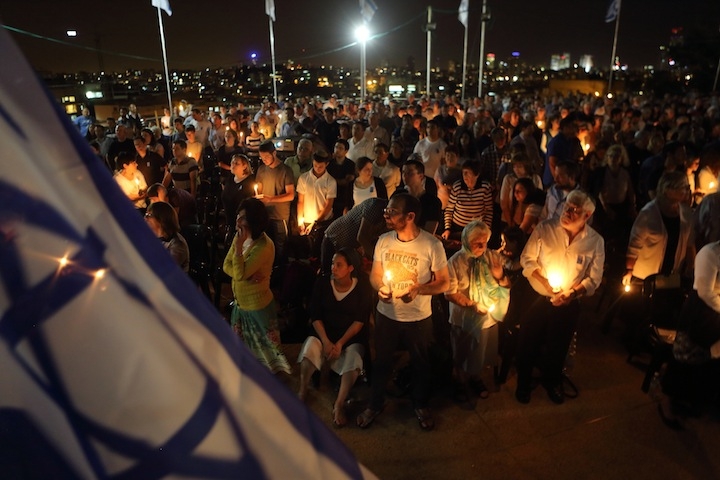 The eve of Israel's Memorial Day, Yom Hazikaron, is observed at a memorial ceremony in the heavily haredi Orthodox city of Bnei Brak on May 4, 2014. (Yaakov Naumi/Flash90)
Advertisement

We hadn’t expected the siren to ring.

We knew there would be one the next morning, when, as on Holocaust Remembrance Day a week earlier, people would come to a standstill whether in their cars, at work or at home. But we didn’t know the same siren would ring out, across the whole country, while we ate Shabbat leftovers on Sunday night, talking about work or the weekend or I don’t know what.

We looked at each other surprised, unprepared. We both got out of our seats and walked onto our Tel Aviv apartment’s small balcony, facing an abandoned building from the British Mandate period. Behind it, a neighbor stood as we did, leaning on his railing. I don’t know what he thought, or whom he’s lost. I thought, it’s nice to have company.

Israel’s Memorial Day, Yom Hazikaron, which began tonight and goes until dusk tomorrow, is all about the fallen in this young country’s many wars. But what struck me Sunday night, as we stood with thousands in Tel Aviv’s Rabin Square, was how this day brought all the people who are left into so many crowded places. We were all standing together even as we surely had different thoughts about what Israel is, what it means, what it should be.

The ceremony dragged on, punctuated by the few songs I recognized or the celebrity who popped onstage. Two hours in, we began walking home. As soon as we crossed the street, we heard the opening notes of the national anthem. Just as we had during dinner, we stopped, turned around and stood silent. As we mouthed the words, we saw another couple standing like us.

Monday morning, I’ll meet a friend for coffee. It was an appointment we’d set, only to reconsider given the day’s solemnity. Would chatting in a cafe demean the saddest time of the year? I, the American immigrant, deferred to him, the first-generation Israeli son of French Jews, and he devised a compromise: We’d take the coffee to go, and then find a park bench. I hope we talk about the state, why we’re here, the challenges we face. But even if we don’t, it’ll be nice to have company.