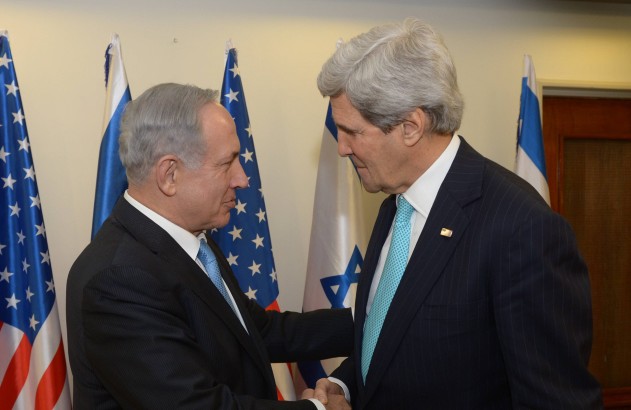 WASHINGTON (JTA) — Now that Israeli-Palestinian negotiations have screeched to a halt, U.S. officials are apportioning blame, and a big share is going to Israel.

In an interview with Nahum Barnea, a veteran diplomatic affairs writer for the Israeli daily Yediot Achronot, anonymous members of the U.S. negotiating team said Israel’s settlement activity was a principal cause of the breakdown in talks last month.

“There are a lot of reasons for the peace effort’s failure, but people in Israel shouldn’t ignore the bitter truth — the primary sabotage came from the settlements,” one of the officials said. “The Palestinians don’t believe that Israel really intends to let them found a state when, at the same time, it is building settlements on the territory meant for that state.”

It seemed clear that a U.S. pullback from the process was in the works now, said Aaron David Miller, a U.S. Middle East peace negotiator under Democratic and Republican presidents, who said he had read through the Barnea interview four times over the weekend.

“The traction required to sustain this process, to weather all of the bad behaviors on each side, isn’t there,” said Miller, who is now a vice president at the Wilson Center, a Washington think tank.

There had appeared for the last few weeks to be internal debate within the Obama administration over whether to keep trying to get the sides back to the table despite increasingly acrimonious exchanges between Israel and the Palestinians, or whether to take a break.

President Obama in an April 25 press conference seemed ready to take a break. “There may come a point at which there just needs to be a pause and both sides need to look at the alternatives,” he said.

Marie Harf, a U.S. State Department spokeswoman, on Monday for the first time confirmed to reporters that the talks were “suspended” when she was asked about the Barnea article. Israel had formally suspended the talks on April 24, but Secretary of State John Kerry had kept his team in the region in hopes of getting the sides back together.

Martin Indyk, the top U.S. negotiator, has “returned to the United States for consultations with the secretary and the White House,” Harf said. “As we assess the next steps in the U.S. efforts to achieve Israeli-Palestinian peace — it is premature, quite frankly, to speculate on what those steps will be or what will happen.”

She denied reports that Kerry was disbanding his negotiations team and that Indyk was returning to the Saban Center for Middle East Policy at the Brookings Institution, which he led before rejoining government last year.

Natan Sachs, a fellow at the Saban Center, said Kerry and Obama had nowhere to go but to “pause.”

“The perception that Kerry owns it more than the parties themselves has reached its limit,” he said. “Now they have to push it back to the sides and let them make their own decisions. I don’t think the United States has fundamentally lost its interest in finding a solution.”

“The notion that the peace process collapsed because of settlement activity is a willful distortion of reality,” he said. “It’s not to say that settlements are not harmful, that building tenders don’t exacerbate tensions — but that is not why Kerry’s 9-10 month effort collapsed.”

The sides, Miller said, were simply too far apart on the core issues, including borders, the status of Jerusalem, Palestinian refugees and the recognition of Israel as the nation state of the Jews.

“The maximum that Netanyahu can offer on all core issues doesn’t come close to the minimum that anyone on the Palestinian side can accept,” he said. “This maximum-minimum problem is in essence the fundamental cause and has been for years. We can whine and complain about it, but you need to acknowledge it.”

Einat Wilf, a former Knesset member who was in the Labor Party and then the breakaway Independence faction, said the Americans were recognizing the reality that they could not force the process.

“If the Israelis and Palestinians are not reaching an agreement, it is not because they need an enthusiastic mediator,” said Wilf, who was visiting with Washington. “They are not incapable children. If they are not making decisions, it is because they are assessing their alternatives.”

The officials quoted in Barnea’s article had high praise for Tzipi Livni, the justice minister and top negotiator. Livni has spoken out loudly about the urgency of achieving a two-state solution and sharply criticized her right-wing partners in Israel’s governing coalition.

Wilf said the Barnea interview was emblematic of a phenomenon whereby American negotiators internalize the dissent they hear from Israelis.

Citing another example, Kerry’s recent use of “apartheid” to describe the dangers to Israel of not achieving a peace agreement, Wilf said, “He listens to what Israelis say about themselves, and then says it.”

Wilf, who emphasized that she did not believe Kerry was intentionally endangering Israel, said repeating words like “apartheid” in international arenas played into the hands of those who would delegitimize Israel.

Sachs, who also had read the Barnea interview, said that the U.S. officials’ critiques were a boon to Israel’s enemies.

“Those who are prone to blame Israel for everything will have an easier time blaming Israel,” he said.

Harf, the State Department spokeswoman, was careful to blame both sides in her briefing Monday for reporters, noting the Palestinians’ application to join international conventions and their unity talks with Hamas.

On Israel’s side, she cited the failure by Netanyahu’s government to meet a March 29 deadline to release the final 26 of 104 prisoners Israel had agreed to let go to resume talks last July, as well as the announcement of settlement starts in eastern Jerusalem.

“On the Israeli side, large-scale settlement announcements, a failure to release the fourth tranche of prisoners on time, and then the announcement of 700 settlement tenders at a very sensitive moment, really combined to undermine the efforts to extend the negotiations,” she said. “So I would very much take notion with the fact that this was just one side. Both sides did things here that were very unhelpful.”